On Nov. 16, two Greenpeace activists from Germany and Italy and two members of the press from India and Italy, all of whom were traveling on valid business and journalist visas, were picked up and detained by Indonesian police.

They were on their way to meet the villagers of Teluk Meranti, who have been supporting Greenpeace in its efforts to highlight rainforest and peatland destruction in the Kampar Peninsula — ground zero for climate change. The police also took into custody an activist from Belgium who had been working at our Climate Defenders Camp there.

Despite the validity of their travel documents and the absence of any wrongdoing, two of the activists and both journalists are now being deported by immigration authorities on questionable and seemingly contrived grounds, even though no formal deportation permits have been issued.

Just a few days before, immigration authorities deported 11 other international Greenpeace activists who participated in a non-violent direct action in an area where Asia Pacific Resources International Holdings Ltd., or APRIL, one of Indonesia’s largest pulp and paper companies, is clearing rainforest and draining peatland on the peninsula.

We set up the Climate Defenders Camp to bring attention to the role of deforestation as a major driver of greenhouse gas emissions in advance of December’s Copenhagen climate negotiations. If we are to stop climate change, we must end global deforestation by 2020 and bring it to zero in priority areas like Indonesia by 2015.

A drive through the Kampar Peninsula reveals acre after acre of forest converted from healthy rainforest to palm and acacia trees.

There is no sign of animal life or biodiversity — just row after row of conversion. The destruction of the peatlands helps to make Indonesia the world’s third largest emitter of greenhouse gases, just after the United States and China.

In the interest of the environment and human rights, Greenpeace is calling upon world leaders and concerned citizens to contact Indonesia President Susilo Bambang Yudhoyono to ask him to stop these repressive actions by the Indonesian police and immigration authorities.

The tactics currently being used by the authorities are likely to adversely impact upon the Indonesian government’s international reputation as well as the country’s reputation as a vibrant democracy.

It is not Greenpeace activists or journalists who should be the focus of the authorities, but the companies who are responsible for this forest destruction. We are working to make President Yudhoyono’s recent commitment to reduce Indonesia’s greenhouse gas emissions a reality, and the journalists are telling that story.

Climate Change Killing Trees in Countries Around the World

Putting a Value on Preserving Forests, Not Clearing Them

Friends of the Earth: Why It’s ‘Suicide to Base Our Future on Offsets’

Daniel Kessler is a communications officer for Greenpeace 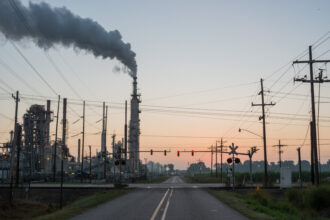