Automakers are pairing off with battery companies to try to win the race to develop an electric vehicle battery that costs less and has a much longer range.

The quest is for a “solid-state” battery, a technology that uses a solid substance to transfer lithium ions in a form that weighs less and takes up less space than current batteries that use liquids and gels.

General Motors said last week that it has a development agreement with SolidEnergy Systems, or SES, of Singapore, a maker of solid-state batteries, that aims to produce a battery for electric cars by 2023 and have a version to sell to consumers by some later date. Volkswagen, Daimler and others also are betting on solid-state batteries.

The competition to develop a solid-state battery is about gaining an advantage in a fast-approaching era when many more consumers are going to be buying their first EVs, part of a transition from an auto industry that runs mostly on gasoline and diesel to one that runs mostly on electricity. Legacy automakers are hoping that their battery partners will give them an edge and help to close the gap with Tesla, the EV powerhouse that, notably, has not announced any solid-state plans.

“There are lots of approaches being taken that are trying to achieve the same goals: increasing energy density, lower cost and higher performance,” said James Frith, head of energy storage for BloombergNEF, about the solid-state race. “In essence, the question is really who can build these cells in a cost effective manner at scale first.”

The switch to EVs is happening in large part because of policy changes to address climate change, like the much stricter emissions rules being implemented in the European Union. Automakers need to overhaul their lineups to meet emissions rules, and their businesses will depend on being able to produce EVs that people want to drive, which means extending battery ranges and reducing costs.

Volkswagen appears to have a head start, having worked for nearly a decade with QuantumScape of California on solid-state batteries, with plans to have a battery on the market by 2025.

This week, Volkswagen showed how far along it is with a “Power Day” news event that gave new details about its ramp-up of battery manufacturing and plans to develop charging stations and other infrastructure.

“Let me begin with the obvious: E-mobility has won the race,” said Herbert Diess, Volkswagen’s CEO at the Power Day event. “It is the only solution to reduce mobility emissions fast.”

Today, nearly all electric vehicles run on lithium-ion batteries in which lithium ions travel through a liquid or gel to discharge electricity.

In a solid-state design, a solid material replaces the liquid or gel. The material, sometimes ceramic, still allows the lithium to pass through. The solid takes up less space than the liquid, which leads to a battery that is smaller and lighter and can pack more energy into each unit of volume.

“Solid state batteries allow you to control what is happening inside a battery more carefully than when using liquid electrolytes,” said Frith.

The idea of a solid-state rechargeable battery is not new, but designers have run into problems with high costs and various technical challenges, like the tendency of solid-state batteries to expand and contract as they charge and discharge.

If QuantumScape, SES or any of the other developers of solid-state batteries can affordably mass produce the technology, the result would be a battery that has longer range and takes less time to recharge than today’s most common batteries. There also would be safety advantages, because solid-state batteries would be cooler and less flammable than some current lithium-ion designs.

The idea is that a battery with those qualities would be so desirable that consumers would eagerly leave behind their gasoline engines.

Automakers are often putting their battery partners front and center in publicity about their technology plans, a sign that these industry giants want some of the sheen associated with technology start-ups.

General Motors President Mark Reuss announced last week that his company has a new partnership with SES to work on the Ultium system, GM’s name for its battery platform. The companies will jointly build a prototype assembly line in Woburn, Massachusetts, where SES has an office.

“Affordability and range are two major barriers to mass EV adoption,” said Reuss. “With this next-generation Ultium chemistry, we believe we’re on the cusp of a once-in-a-generation improvement in energy density and cost. There’s even more room to improve in both categories, and we intend to innovate faster than any other company in this space.”

The test for GM and SES will be whether it can hit those numbers while mass-producing the batteries, and do so in a way that costs less than today’s batteries.

Volkswagen was early in pairing up with a solid-state battery company, QuantumScape, and it has the advantage of working with a partner that is getting positive attention from investors and the media for the promise of its technology.

One of the people singing the company’s praises is Paul Albertus, the former head of the Department of Energy’s Advanced Research Projects Agency-Energy, or ARPA-E, who now teaches at the University of Maryland.

“In my view, looking at the data QuantumScape has shared, they’re hitting a home run in terms of their performance data,” he said, in a December panel discussion of the technology, organized by QuantumScape. He has no financial relationship with the company. “At the same time they’re also clearly stating, and I think I agree with this, that they ultimately need to hit something like a grand slam in order to bring this technology to market as a compelling product.”

QuantumScape started in 2010, co-founded by three people from Stanford University. Volkswagen began working with QuantumScape in 2012 and in 2018 the German automaker became the battery-maker’s largest shareholder and the companies announced a plan to work together more closely.

Honda and Jaguar Land Rover, among other companies, are working with Ilika of the United Kingdom.

Toyota President Akio Toyoda spoke about next-generation EV technologies at the 2018 Consumer Electronics Show, saying that solid-state batteries would be “smaller, lighter, and most importantly, for both consumers and automakers, much more affordable.”

To illustrate what this could mean for range, QuantumScape has said that a solid-state design could mean that an EV that now has a range of 200 miles would have a range of 300 to 400 miles.

A Race With Tesla

As legacy automakers make this transition, they are not just competing with each other but trying to catch up with Tesla, the company that is the EV leader in most of the world.

So it is interesting that Tesla is so far not part of the solid-state battery race. The company’s leaders have said they can increase range and reduce costs through variations on their existing battery technology.

Tesla is focusing on a shorter time horizon, targeting mass production of the new battery it announced last summer, which is expected to go on sale in 2023.

The fact that Tesla doesn’t feel a need to talk much about its long-term plans, while its competitors are talking a lot about theirs, says quite a bit about who feels as if they have momentum and credibility in the EV market, and who would like to build some. 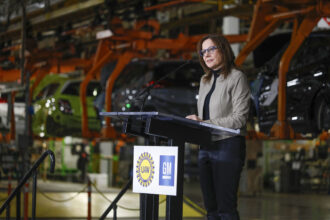 In a Major Move Away From Fossil Fuels, General Motors Aims to Stop Selling Gasoline Cars and SUVs by 2035 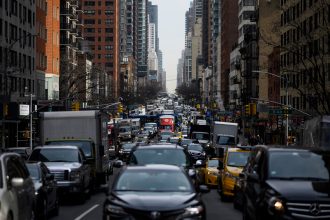