WASHINGTON—A little-publicized Canadian court decision has thrown a monkey wrench into an on-again, off-again proposal to transport oil from tar sands mines in Alberta to a U.S. seaport in Maine for export.

Last month, judges with the Court of Quebec rejected a Montreal-based oil pipeline company’s request to construct a pumping station near the Quebec-Vermont border. The court case pitted environmentalists and Quebec citizens against the owners of a South Portland, Maine-to-Montreal, Quebec oil pipeline.

Halting the pumping station is part of an overarching strategy by environmentalists to challenge Canada’s expansion of tar sands oil extraction. They fear the station is the linchpin in opening an eastern gateway for the flow of a dirtier grade of oil from western Canada to Maine. From there, it would likely be shipped to refineries along the Gulf Coast.

The pumping station is a crucial piece of Montreal Pipe Line Ltd.’s plan to reverse the flow direction of its pipeline. Currently, that pipeline carries conventional crude oil from a tanker facility in South Portland to refineries in Montreal. It traverses 236 miles through Maine, New Hampshire, Vermont and Quebec.

From Montreal, the offshore oil is now funneled onto Enbridge Inc.’s Pipeline 9, which travels west all the way to Sarnia, Ontario.

Montreal Pipe Line’s request to reverse the flow on the South Portland-Montreal pipeline has had environmentalists on edge for several years because it came in tandem with the Trailbreaker project that Enbridge Inc. first floated in 2008.

That proposal by Enbridge—a separate oil transport company based in Calgary, Alberta—entailed switching the flow on 524-mile Pipeline 9 from westerly to easterly. The 30-inch diameter pipeline currently has the capacity to move 240,000 barrels daily.

Enbridge blamed market conditions when it officially shelved its Trailbreaker proposal in 2009. But green groups say the company backpedaled on Trailbreaker when challengers put the reversal idea under a microscope. Conservationists suspect the company is now trying to accomplish the same goal in piecemeal fashion.

Steven Guilbeault is deputy director of Equiterre, the Montreal-based environmental advocacy organization that spearheaded the legal challenge of the pumping station.

“Enbridge has been saying that its request for a reversal on phase one has nothing to do with getting tar sands from Alberta to Portland,” he told InsideClimate News. “But it’s hard for us to believe that.”

In an interview, Enbridge spokeswoman Jennifer Varey did not deny that the company might eventually try to reverse the direction of the entire Pipeline 9. But right now Enbridge is focused on phase one, the Sarnia-to-Westover segment, she said. Public hearings on that undertaking are scheduled for May 23 to 25.

Reversal of the Sarnia-to-Westover section is a priority of Imperial Oil Ltd., one of Enbridge’s key customers, Varey said. Imperial Oil has explained to Enbridge how an easterly flow would benefit its refinery near Westover and access to the Ontario market. A subsidiary of ExxonMobil, Imperial produces more than 200,000 barrels a day from tar sands mines, and claims proven oil sands reserves of more than 2.4 billion barrels.

Initially, Enbridge expects the reversed segment to carry light crude oil. But it will be capable of transporting a range of western Canadian crude oil from Alberta, Saskatchewan and Manitoba. Capacity would start at 50,000 barrels per day and eventually grow to 200,000 barrels per day.

Stopping the pumping station on the Montreal-to-South Portland segment will be a fleeting victory, environmentalists agree, if Enbridge’s Pipeline 9 is transformed into a route for shipping tar sands oil east.

In May 2009, the commission in Quebec charged with protecting the province’s agricultural land approved Montreal Pipe Line’s request to rezone land to accommodate a pumping station in Dunham, Quebec, a community near the Vermont border. Company engineers had determined that station infrastructure would have to be situated at that spot to boost the heavy crude over the Sutton Mountains on its journey from Montreal to South Portland.

The agriculture commission’s decision was reversed in 2010 after Equiterre appealed to Quebec’s administrative tribunal. Last November, Equiterre continued to challenge the pipeline company’s quest for the pumping station as the case advanced to the Court of Quebec.

The latest court ruling was issued Feb. 16. It was written in French and didn’t garner attention in the American press.

“That’s twice in a row we’ve been told by a Quebec judicial body that we are right so we are very pleased,” Guilbeault said. “But obviously it is far from being over.”

Attorneys for Montreal Pipe Line have 30 days to file an appeal over the latest decision. Though they had indicated interest in doing so, it does not appear that they had followed through as of Monday morning. Spokespeople did not return requests for comment from InsideClimate News.

Advocacy organizations such as the Natural Resources Council of Maine maintain that Montreal Pipe Line has tried to escape public scrutiny by saying it hasn’t applied for a permit to reverse the pipeline flow between South Portland and Montreal.

“The company has really tried to downplay this but I don’t think they’re fooling anyone,” said Dylan Voorhees, the Maine council’s clean energy project director. “If they appeal the court decision, it makes it clear the reversal is actively on the drawing board. The only reason to have a pumping station is to reverse the flow.”

Three pipelines actually are buried along the right-of-way route between Portland and Montreal. A 24-inch diameter pipe continues to carry oil while an 18-inch diameter line is currently deactivated. The third and smallest pipe, 12 inches in diameter, was mothballed in the early 1980s.

Conservation organizations in Canada and New England have combined forces to try to hold Enbridge and Montreal Pipe Line accountable for their pursuit of pipeline reversals.

“Ultimately what we’re trying to do is to prevent tar sands from coming to Quebec and going on to Maine,” Guilbeault said. “We feel that a signal needs to be sent to the federal government and oil companies that what they are doing is unacceptable.”

The tar sands extraction industry is Canada’s fastest growing source of emissions of planet-warming gases. Citizens in both countries also are worried about the risks of pipeline spills and other accidents. In Maine, for instance, they are worried about the potential impact on Sebago Lake, a significant source of drinking water, and Casco Bay, vital to the state’s fishery and tourism industries.

Glen Brand, director of the Maine chapter of the Sierra Club, said advocates in Maine, Vermont and New Hampshire are strategizing to prevent Enbridge and Montreal Pipe Line from succeeding with their pipeline reversals. For instance, they are exploring whether the Montreal-to-South Portland portion would require a presidential permit because it crosses an international border.

“We think there are ways to stop these projects on a number of fronts,” Brand said. “They deserve public and technical scrutiny beyond what they have received.”

Environmental organizations are eager to start talking about an energy strategy for eastern Canada and the northeastern United States,” said Guilbeault, of Quebec’s Equiterre.

“Companies think provinces shouldn’t have any say about these matters, about where pumping stations and pipelines should go,” he said. “They say our national energy infrastructure should be under federal jurisdiction. We think it should be shared.” 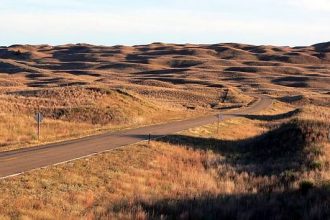