The judge presiding over a pivotal case involving toxic emissions from gas and oil drilling has accepted a jury verdict that awarded $2.9 million to a family who said the emissions have made them sick.

Judge Mark Greenberg issued a one page ruling late Thursday denying a motion by Aruba Petroleum to reject the jury’s verdict. Among Aruba’s arguments rejected by Greenberg were that Bob and Lisa Parr did not prove the emissions that made them sick came from Aruba wells.

The Parrs filed their lawsuit in March 2011, claiming they were “under constant, perpetual, and inescapable assault of Defendants’ releases, spills, emissions, and discharges of hazardous gases, chemicals, and industrial/hazardous wastes.”

Following a two-week trial in April, a Dallas County jury found that Aruba “intentionally created a private nuisance” that affected the family’s health and awarded the Parrs damages. The case is one of the first successful U.S. lawsuits alleging that toxic air emissions from oil and gas production have sickened people living nearby.

Lisa Parr said Greenberg’s ruling further validates the family’s claim of being made sick by emissions generated by Aruba.

“We have had a jury hear the evidence and say that it was Aruba’s fault,” Parr said. “Now we have a judge who heard the evidence say that the jury was right.”

The company had earlier paid $108,000 to settle a court case brought against it by the Texas Attorney General’s Office. In that case, an inspector for the Texas Commission on Environmental Quality was sickened after he began collecting air samples in response to a complaint from the Parrs, according to an agency report. Using an infrared camera, he identified “heavy plumes” of emissions wafting from the Aruba facility and toward the Parr house, 280 feet away.

Greenberg’s ruling sets the stage for a possible appeal by Aruba, a step that could take the case into a system that becomes progressively more political and philosophically in tune with business at its higher levels.

Aruba, a privately owned company based in Plano, Texas, said talk of an appeal is “premature.”

“We are disappointed with the ruling denying our request to set aside the jury verdict,” the company said in a statement released late Friday. “Even so, there are additional post-verdict motions to be filed and ruled upon before the judgment becomes final.”

But legal experts say an appeal is almost inevitable.

“Losing this case was not good for the industry,” said Thomas McGarity, a University of Texas law school professor who specializes in environmental and administrative law, in an interview with InsideClimate News last month.

Robert Percival, director of the University of Maryland’s Environmental Law Program, said the judge’s decision was “another important step toward providing redress to those exposed to the unpleasant side effects of fracking operations.”

Aruba argued that there was no way to fix the blame for the Parrs’ health problems on its operations. More than 100 wells have been drilled within two miles of the Parrs’ property, and only 22 of them are owned by Aruba. 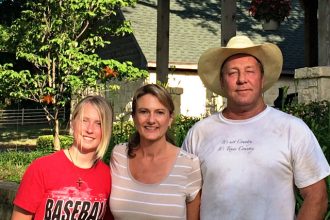