Baltimore has brought billions of dollars of investment to its waterfront, transforming the Inner Harbor into a model of urban revitalization over the past half century. But rising seas are now putting that investment at risk, and the city wants to hold the fossil fuel industry responsible.

On Friday, the city sued 26 fossil fuel companies, seeking to hold them financially accountable for the threats posed by climate change. Baltimore Solicitor Andre M. Davis said that the companies knew for decades that the use of their products was warming the atmosphere and could have grave consequences, but that they failed to take steps to reduce that harm.

“Baltimore’s residents, workers and businesses shouldn’t have to pay for the damage knowingly caused by these companies,” he said at a news conference with Mayor Catherine Pugh.

Baltimore is seeking compensation for protecting the city from the impacts of climate change, as well as punitive damages and an order that the companies relinquish some of their profits for allegedly misleading the public and policymakers about the harms posed by their products. It asks that the amount of damages be determined in a trial.

Baltimore is the latest in a growing list of more than a dozen cities, counties and states that have sued fossil fuel companies over climate change in the past year. Its lawsuit also comes less than 24 hours after a federal judge dismissed a similar case in New York City.

Davis said a key difference is that, unlike New York’s case, Baltimore’s is in state court.

The three city cases that have been thrown out—in New York City, San Francisco and Oakland—were all rejected by federal judges who agreed with the fossil fuel industry’s argument that federal laws, primarily the Clean Air Act, take precedence over state laws, and that Congress and the president are responsible for taking action, rather than the courts.

“Despite the federal court’s unfounded fear that legal solutions will prevent political ones, the justice system is not powerless to give relief to local communities that are harmed by global warming and rising sea levels,” Davis told InsideClimate News. He noted that in the 1950s, it was state judges in Delaware who ruled against discrimination in public school education, going against the federal tide at the time.

Legal scholars have suggested that the plaintiffs against the fossil fuel industry could have a better chance in state courts, and the industry has been working to get several of the cases moved to federal jurisdictions.

Fossil Companies Knew of the Risks

In its lawsuit, Baltimore alleges that fossil fuel companies knew for nearly 50 years that the production and use of fossil fuels created greenhouse gases responsible for global warming. Yet at the same time, it says, the companies engaged in a coordinated effort to hide that understanding and undertake a campaign to discredit the growing body of science confirming the connection.

It claims that the 26 companies named are responsible for about 15 percent of the carbon dioxide emissions between 1965 and 2015. The consequences of that increase in atmospheric CO2 include extreme weather events and sea level rise, both particular threats to Baltimore, the lawsuit says.

“As a direct and proximate consequence of defendants’ wrongful conduct … flooding and storms will become more frequent and more severe, and average sea level will rise substantially along Maryland’s coast, including in Baltimore,” says the 130-page lawsuit, filed in the Circuit Court for Baltimore City.

The city cites a 2014 study by Climate Central that projected that within 80 years, Baltimore could see annual flooding that would break today’s records. The same study found that sea level rise driven by climate change has already increased the likelihood of extreme floods in and around Baltimore by at least 20 percent.

Baltimore is already facing winters and springs with more extreme precipitation and summers that are longer, hotter and drier, according to the lawsuit. Two months ago, the region was hit with a 1,000-year storm that brought torrential rains and flash floods.

It also faces the burden of addressing public health impacts associated with climate change, including heat-related illnesses and worsening allergies, the lawsuit says.

The Inner Harbor and Infrastructure at Risk

Baltimore’s waterfront is particularly vulnerable to the impacts of sea level rise because of its dense development and low-lying areas, the lawsuit says.

The port and waterfront provide jobs and a strong property tax base for the city. The revitalized Inner Harbor attracts more than 20 million visitors a year to an aquarium, museums, historic ships, restaurants and hotels.

Beyond the waterfront, the city’s roads, rail lines, emergency response facilities, wastewater facilities and power plants are all vulnerable to extreme weather, the lawsuit says.

Like the other cities, including tiny Imperial Beach, California, that are waging legal war with the fossil fuel industry, Baltimore says it cannot afford the cost of mitigating climate change impacts. 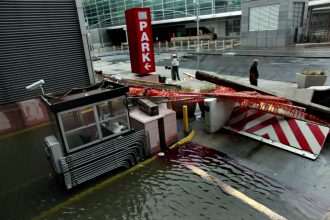