Carbon emissions from China are 14 percent lower than previously estimated because those estimates failed to take into account the country’s low quality coal that emits less carbon, according to a new study published in the journal Nature.

The findings don’t change China’s status as the world’s largest emitter of carbon dioxide, but they will likely give the country more negotiating power in the United Nations Climate Change Conference that will take place later this year in Paris, experts say.

The new estimate comes from a re-evaluation of emissions from the burning of fossil fuels as well as cement production in China from 1950-2013, figures that have varied by as much as 40 percent depending on the data used. An international team of researchers re-examined the amounts of various fuels burned and their emissions factors.

Michael Mann, director of the Earth System Science Center at Penn State University, said the study could play a significant role in the international climate talks.

“Critics of regulating carbon emissions here in the U.S. like to point to China and blame them,” Mann said in an email. “In fact, however, China is by some measures doing more than we are. They are investing far more in renewables than the U.S., and are already employing mechanisms to put a price on the emission of carbon. And now we learn that they’ve been emitting less carbon than we thought.”

The study concluded that China’s energy consumption was 10 percent higher from 2000 to 2012 than figures reported by the Chinese government but that the emissions factors for Chinese coal are 40 percent lower than the global averages used by the Intergovernmental Panel on Climate Change. The study also found that emissions from cement production in China are 45 percent less than recent estimates.  That led to the conclusion that China’s emissions are 14 percent lower than previously reported.

“Initially we thought that carbon emissions may be underestimated because we found energy consumption is higher than the nationally reported figure,” said lead author Zhu Liu a climate change specialist at Harvard University’s John F. Kennedy School of Government. “[But] because the emissions factor is much, much lower, the total number is still lower. This was quite surprising.”

Liu, who is also a guest researcher at the Chinese Academy of Science’s Shenyang Institute of Applied Ecology, in Shenyang, China says the reason the emissions factor for coal in China is so much lower than the global average is because China has already burned through much of its high-quality, high-carbon content coal.

“The average ash content in China’s coal is higher than the global average and the carbon contents in the coal is much less,” Liu said. “If you consumed the same amount of coal you would get less carbon emissions when compared with coal from everywhere else.”

Mann says the revised emission figures are a cause for optimism in prospects for progress at the Paris climate conference.

“With the U.S. and China already having pledged substantial commitments to lowering carbon emissions, it is time for the rest of the world to get on board,” he said.

The new, lower emissions figures from China do not, however, affect the concentration of carbon dioxide already in the atmosphere and the current rate of global warming. Also, another recent study said China’s pollution also kills 1.6 million people a year.

“Unfortunately this revision makes no difference to the overall climate picture,” Dave Reay, professor of carbon management at the University of Edinburgh said in a prepared statement. “China’s emissions may be a bit less than we thought, but we know how much total CO2 there is in the atmosphere and it is monitored globally. This study therefore makes no difference to the total amount in the atmosphere; it simply means that accounting for Chinese emissions is getting better.” 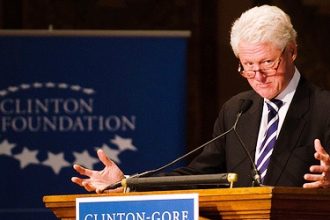