In the wake of the Keystone XL decision, environmental activists are seizing the momentum by calling for the cancellation of another tar sands pipeline that has remained largely below the radar.

On Tuesday, local and national groups urged the Obama administration to reject Enbridge’s Alberta Clipper pipeline expansion. The pipeline has a permit to carry 450,000 barrels of oil per day from Alberta to Superior, Wisc., but is effectively moving nearly twice that amount—800,000 barrels—because Enbridge has diverted the flow through another pipeline at the U.S.-Canada border.

Environmental groups say the scheme is illegal. Last year, a coalition of organizations, including the National Wildlife Federation, Minnesota’s White Earth Nation and the Sierra Club, sued the State Department for allowing Enbridge to proceed. A decision is pending.

The “State Department is turning a blind eye,” said Winona LaDuke, executive director of the indigenous environmental justice organization Honor the Earth, in a statement. She called the Alberta Clipper the “Keystone XL of the Great Lakes region.”

With Keystone out of the way, green groups are rallying around other causes, including the Alberta Clipper. At the heart of the controversy is whether Enbridge—the Canadian company responsible for a million-gallon tar sands spill in Michigan that cost more than $1 billion to clean up—skirted the law. Cross-border pipelines need a permit from the State Department for construction and certain modifications.

Enbridge applied for an expansion for the Alberta Clipper in 2012, launching a years-long review process. A State Department spokesperson said the agency is drafting an environmental impact statement and plans to gather public comments.

In the meantime, Enbridge found another way to increase oil shipments. The Alberta Clipper (also called Line 67) runs parallel to a separate Enbridge oil pipeline, Line 3, at the Canadian border. Enbridge replaced a 17-mile section of Line 3 at the border crossing with brand-new pipe that can handle large volumes of tar sands oil. The company then built connections between Line 3 and the Alberta Clipper. (Enbridge called the Line 3 modification a “maintenance” project and did not apply for a State Department permit).

Since July, oil from the Alberta Clipper has been diverted into the new segment of Line 3 at the border, then put back into the Clipper for the rest of the trip to Superior. At the same time, the traditional crude oil shipped through Line 3 takes a brief detour through the Clipper before returning to Line 3 after the border crossing. This border swap allows Enbridge to ship up to 800,000 barrels per day through the Clipper pipeline.

When Enbridge first proposed this idea last year, environmental law experts questioned the legality of the plan, which they said was a clear attempt to “piecemeal” the project.

In mid-October, 11 U.S. Senators led by Al Franken (D-Minn.) wrote a letter to the State Department expressing similar concerns. Specifically, they questioned whether there are limits on the “length of time or volume of product that this diversion can be used for” while the State Department reviews the Clipper expansion application.

Terri Larson, an Enbridge spokeswoman, said in an email that the pipeline detour is “an interim measure” that “provided flexibility to optimize our permitted cross-border capacity on both lines, so that we can meet customer demands” while the State Department reviews the Clipper application, “a process that is taking longer than anticipated.”

“This approach is in keeping with the terms of the presidential permits previously issued by the State Department for Lines 3 and 67,” she wrote.

Jim Murphy, senior counsel for the National Wildlife Federation and an attorney in the lawsuit, said the case also alleges the Line 3 replacement work should have triggered a State Department NEPA review.

The agency hasn’t challenged Enbridge’s actions on either pipeline, and a spokesperson from the agency said it doesn’t comment on ongoing litigation.

Andy Pearson, Midwest tar sands coordinator for MN350, said the agency’s complacency indicates that “all that matters to the U.S. government is a couple of miles at the border.”

MN350 is the Minnesota chapter of 350.org, a national environmental group that played a leading role in the anti-Keystone movement.

Pearson said the Clipper process should trigger the same scrutiny given to the Keystone XL—and he believes once the process is applied correctly, it will fail President Obama’s climate test.

“This is exactly the same sized pipe, same oil, same destination, and it’s in the same presidential permit process,” he said. “So I can’t see President Obama being able to construct a scenario in which this pipeline” clears the bar.

Correction 11/20/15: This story has been updated to clarify the lawsuit’s allegations about the Line 3 replacement work. 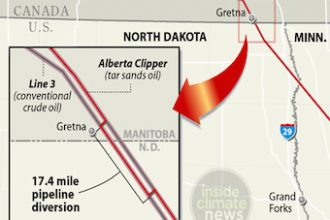