As the wait continues for the ice to melt in Alaska’s Cook Inlet so a months-long underwater natural gas pipeline leak can be halted, federal regulators are now raising concerns about an adjacent pipeline owned by the same company. That one carries an even bigger environmental threat: oil.

The Pipeline and Hazardous Materials Administration (PHMSA) warned that a 52-year-old oil pipeline could be vulnerable to the same forces that caused the natural gas pipeline to crack and start leaking in late December. The agency ordered the company to conduct inspections beyond its regular oversight and shut down the oil pipeline if deemed unsafe.

“It appears that conditions exist on the MSG Hazardous Liquid System that pose a pipeline integrity risk to public safety, property or the environment,” wrote Chris Hoidal, the western region director of PHMSA.

Hilcorp Alaska owns the pipelines and the four oil platforms they connect to. Pipeline A carries the gas that powers the platforms. It is spewing almost pure methane into the inlet. Two of the oil platforms are manned 24 hours a day and pump a combination of oil and water, which is carried back to shore via Pipeline B.

“If a leak or rupture of ‘B Pipeline’ occurred, the environmental damage has the potential to be significantly greater than the presently-known environmental damage from the leak occurring on the ‘A Pipeline,’” Hoidal wrote in the letter to Hilcorp. The agency previously ordered Hilcorp to fix Pipeline A by May 1 or shut it down, as well as carry out rigorous safety tests.

Cook Inlet, an estuary that stretches 180 miles from the Gulf of Alaska to Anchorage, is home to endangered beluga whales and other species. Ice has prevented any repairs to the line or environmental monitoring.

Hilcorp did not respond to a request for comment.

The cause of the leak in Pipeline A is not yet known. But two leaks from the same line in 2014 can shed some light on what may have happened and why the second pipeline may be vulnerable.

Those incidents revealed that the 8-inch pipeline was not laying flat on the seafloor as it should, exposing it to battering by rocks carried by the severe tides and currents. Cook Inlet tides are among the largest in the world, varying as much as 35 feet between low and high tides. The rapid movement of large amounts of water can cause a whirlpool to build around a pipeline if it’s not affixed to the seabed.

The vortex of water “can cause a pipeline—even an 8-inch—to snap,” said Richard Kuprewicz, president of Accufacts, Inc., a consulting firm that advises government agencies and industry on pipeline safety. “PHMSA, in issuing this, is saying that what we think may be causing this is also causing the oil line to be at risk.”

The types of inspections that Hilcorp conducts on the pipelines every year do not reveal whether they have eroded or are dented or gouged—all known problems for pipelines in Cook Inlet.

Rebecca Craven, program director for the nonprofit Pipeline Safety Trust, said it’s not surprising that PHMSA issued this notice. Once the agency starts investigating a problem, like the leak on Pipeline A, it may become concerned about other infrastructure facing similar risks.

Since discovering the methane leak, Hilcorp has lowered the pressure in the line, most recently bringing it to a maximum 215,000 cubic feet per day from 310,000 per day. Pipeline B carries roughly 3,700 barrels of a mix of crude oil and water a day; about two-thirds is water.

The company has said that it can’t shut Pipeline A without risking a leak of the crude oil that used to move in the pipeline and it can’t send divers into the icy water.

The area of the leak has been designated a critical habitat for the inlet’s belugas under the Endangered Species Act. Scientists and environmentalists are concerned that the methane could be creating oxygen dead zones, potentially dangerous for the belugas and their prey. A massive flow of water passes the leak location twice daily with the tides and no one knows how far the methane leak is spreading.

Every day that it is safe to fly, Hilcorp takes a helicopter over the leak, but more often than not the methane bubbles are concealed by ice.

“The ice creates a cap that traps the methane in the water and then increases the solubility of the methane into the water,” said Geoff Merrell, the on-scene-coordinator for the Alaska Department of Environmental Conservation (ADEC). “If the ice was not there, the methane surfaces and releases into the air.”

The longer the methane is in the water, the greater the impact it can have.

At the request of the ADEC, Hilcorp submitted a plan to start measuring the impacts via boat, but that can’t begin until the ice is gone. “At the moment it’s not looking like in the near future, anyway, that we’ll be able to conduct vessel operations,” Merrell said.

In locations around Cook Inlet with safer conditions, the company has taken nearly 50 water samples to establish baseline measurements, according to Merrell.

Freezing temperatures are forecast in Cook Inlet through the end of the month at least. In the meantime, responders are up against a series of ticking clocks.

When NOAA tracked satellite-tagged beluga whales in 2002 and 2003, the agency found that the whales spent a significant amount of time near the two pipelines, according to the PHMSA order.

And while winter is a relatively quiet period for Cook Inlet’s wildlife, everything changes in the spring. “We get hummingbirds, monarch butterflies—this is a migratory superhighway here,” Merrell said. “We need to keep an eye on that.” In late March, the migratory season for birds, sea duck and waterfowl will begin. The U.S. Fish and Wildlife Service has said that  the birds will be at risk from the leak. Mid-April will see the beginning of the fish migration, including for the beluga’s prey.

Hilcorp has until early April to respond to the first preliminary PHMSA order, which set the May 1 deadline to fix the pipeline. A final order will then be issued. The company has also been issued two separate Notices of Intent to Sue, each of which gave Hilcorp 60 days to fix the leak or face legal repercussions. The first of those notices, filed by the nonprofit Cook Inletkeeper, will hit its 60-day deadline on April 15. The second, filed by the Center for Biological Diversity, is up at the end of April.

Hilcorp has 30 days to respond to PHMSA’s latest order on the oil pipeline, after which a final order will be issued. It will then have 21 days to conduct the inspection. 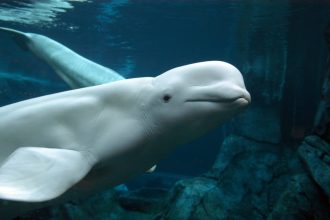 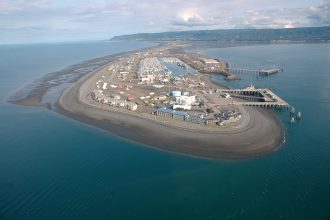 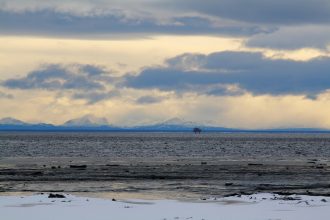