Jeanne Shepherd was on her way to a church gathering when an oil and gas well in Karnes County, Texas blew its top on Tuesday afternoon. A mixture of liquid petroleum products gushed high into the air. Some of it splashed onto Shepherd’s truck, coating her windshield in an opaque, milky film.

Shepherd said the well looked like the Old Faithful geyser in Yellowstone National Park. “It spewed and it spewed … It was all over everywhere, and I knew I wasn’t going home that night,” she said.

No one was injured, but families were left scrambling on how to respond. The blowout is only the most recent in a long line of life-altering consequences of the fracking boom in the Eagle Ford Shale. Shepherd was among those evacuated on Tuesday, which is not the first time oil and gas drilling has driven her from her once-idyllic home.

The well operator Encana Corp. — a Canadian company based in Calgary — de-pressurized the well and shut it down Thursday morning.

Encana spokesman Doug Hock said 15-20 families were evacuated for safety and Encana is paying for them to stay at a local hotel.

Shepherd, a retired Navy veteran, estimates the well lies a quarter-mile from her South Texas home. She’s worried about the contamination on her property, which she said has already plummeted in value because of the nearby drilling, and on her neighbors’ land. Three of the landowners closest to the well own cattle, she said, so it could harm the livestock and their drinking water.

Lucas Jasso is one of those landowners. He has three cows and two bulls. “I don’t know at this point if my animals are still alive or not,” he said on Thursday afternoon. Jasso, a Vietnam War veteran, was in Corpus Christi when the well erupted.

Jasso’s neighbor Leonard Cordova lives about 150 yards from the well, which is on the property across the street from his family’s land. Cordova was making lunch for his 2-year-old daughter on Tuesday when he heard a loud bang. Because Cordova’s wife had driven the family car to work, Cordova and his daughter had no way to evacuate until they flagged down a firefighter about two hours after the blowout. They had to leave their cats and dogs behind.

Cordova said he had a bad headache Tuesday night and a sore throat. His daughter’s eyes look red, but she seems otherwise healthy. Cordova used to work in building maintenance for an oil and gas contractor, but was laid off when oil prices tanked. Still, he said things were better before the boom began. “We always see flares and all this pollution. [I’d] rather them not be here,” he said.

Hock said Encana is working with state regulators to assess the environmental damage, and to determine when the families can return home.

Initial concerns that the well may have released hydrogen sulfide — a toxic and potentially deadly gas — proved unfounded, he said. Encana placed six air monitors around the well and took readings every 30 minutes, which showed no indication of hydrogen sulfide, Hock said. The results were submitted to Texas regulators. Encana is continuing to monitor for toxic air pollutants including benzene, toluene and xylene.

Hock said the well contained crude oil, natural gas and condensate — light petroleum compounds used in manufacturing. The well had been drilled and hydraulically fractured when it blew. What erupted from the well was a mixture of condensate, natural gas and produced water, Hock said. Produced water contains naturally-occurring toxins from the geologic formation, including compounds such as heavy metals and the carcinogen benzene.

The Encana well is in the heart of the Eagle Ford Shale, one of the most active shale plays in the country. Since 2008, the oil boom has changed the rural, once peaceful region into an industrial landscape. Despite citizen complaints over drilling impacts, an investigation by InsideClimate News and the Center for Public Integrity last year found that toxic emissions threaten the health of local residents and Texas’ regulatory system does more to protect the industry than the people. In January, Texas regulators installed an air monitor in Karnes City. It’s the first stationary air monitor located in a heavily-drilled area of the Eagle Ford.

For Shepherd, the explosion only heightened her frustration. When she moved to Karnes County in 2008, she thought she had found her final home. “At the time, it was that piece of paradise everybody looks for,” she said. “If you’re lucky enough in life — if you haven’t found it already — there will be a place that speaks to your heart.”

Karnes County was that place. Shepherd purchased 16 acres and moved into a mobile home surrounded by mesquite trees. John Cooper, a longtime friend who is a retired army veteran, lives in an adjacent trailer home.

Shepherd and Cooper found their lives turned upside down when the wells entered their lives in 2011. The noise from the drilling was so bad they spent two summers living part-time in local hotels (again, the well operators paid the bill).

But this well explosion “opens up a whole new chapter,” and is much more serious than the nuisance caused by traffic and noise, Shepherd said.

She’s ready to pull up stakes and leave. After the evacuation, Shepherd approached an Encana community relations representative and asked Encana to purchase her property for $300,000. They “owe me that much,” she said. “I can’t sell it. My property value has declined…Everything I own is wrapped up in that property.”

Shepherd said the representative did not give her a straight answer. Hock, the Encana spokesman, said “it’s too early to say” if Encana would buy anyone out. The company’s current priority is environmental assessment and returning people to their homes, he said. 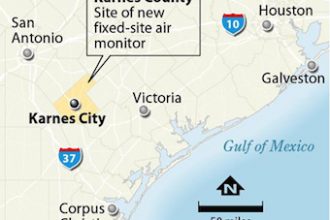 Air Monitor in Texas Frack-Boom Country Is Up