MAYFLOWER, Ark.—Homeowners whose lives are still in limbo after thousands of gallons of oil streamed into their neighborhood from a ruptured pipeline on March 29 might never know precisely how much of the sticky black goo oil actually spilled.

The working estimate is that 5,000 barrels—210,000 gallons—of Canadian heavy crude oil poured from a 22-foot break in ExxonMobil’s Pegasus pipeline on that Good Friday afternoon.

But officials with the U.S. Environmental Protection Agency and Exxon say the actual amount can’t be figured until the Pegasus is up and running again. That will allow Exxon to do a mathematical calculation while the line is operating at the same flow as it was when it broke open.

However, that scenario could prove problematic.

It’s quite possible that the beleaguered pipeline, which stretches 850 miles across four states from Patoka, Ill., to Nederland, Texas, will never reopen. And, even if it does someday pump oil again, federal regulators have ordered Exxon to permanently reduce its operating pressure.

Karen Tyrone, vice president for operations of ExxonMobil Pipeline Co. told the Arkansas Democrat-Gazette last week that retiring Pegasus “is within the realm of possibilities.” The 65-year-old line was manufactured using a welding process that’s now known to be defective and with a type of pipe that is inherently brittle and prone to cracking, according to documents filed with federal regulators.

Figuring out an accurate count on barrels spilled is crucial because that number will help determine the size of the fines Exxon will face under the federal Clean Water Act. Civil penalties could range from $1,100 to $4,300 per barrel, depending on whether Exxon is found guilty of negligence or willful misconduct. Penalties for a 5,000-barrel spill could range from $5.5 million to $21.5 million.

The size of an oil spill can be determined in several ways.

Calculations can be made from data that the pipeline operator collected at the time of the spill. A count also can be based on the amount of oil collected during a cleanup, as the EPA’s Chicago-based Region 5 is doing in Michigan, where the nation’s largest oil pipeline spill occurred in 2010.

In Michigan, the EPA’s on-scene coordinator devised a formula to track how much oil was being recovered, whether it was skimmed off the surface of the water or embedded in vegetation, soil, sediments or debris. The agency says more than 1.1 million gallons of oil have been recovered so far in the ongoing cleanup. The Canadian company responsible for that rupture, Enbridge Inc., disputes that figure, claiming only 843,444 gallons spilled.

When asked why the Arkansas and Michigan spills are being handled so differently, an EPA spokeswoman for Dallas-based Region 6, which includes Arkansas, said managers make their own decisions based on the unique factors associated with each cleanup.

“These are two completely different incidents, so to compare the two, we aren’t able to do that,” EPA spokeswoman Jennah Durant told InsideClimate News. “As far as I know, nobody from our region was involved in the cleanup in Michigan.”

Nicolas Brescia, the EPA’s Region 6 on-scene coordinator for the Mayflower cleanup, said the agency is keeping tabs on the amount of oil collected, but isn’t doing its own tally.

“We are showing the waste collected and disposed of, but it’s impossible to figure out the amount of oil in the debris,” he said. “You lose some oil to evaporation, some gets absorbed into soil and plants, and some has to biodegrade on its own.”

Brescia is confident that the 5,000-gallon estimate provided by Exxon is accurate as possible at this point.

“Until the investigation is done with the Department of Transportation and until they refill that line, we won’t know the exact number of barrels lost,” Brescia said. “Five thousand is what we’re going with because that’s the best number we have.

“If we felt maybe that [Exxon] was not 100 percent correct, we could give them an order to answer questions. But we typically don’t run into that. There’s no value for them to tell us an incorrect number.”

Most of the spill site in Mayflower has progressed from the “response” to the “remediation” stage. That means that while the EPA is still involved in the cleanup, the Arkansas Department of Environmental Quality (ADEQ) is directing day-to-day operations on the ground. Brescia, who spent two months in Mayflower after the spill, still makes occasional trips to Arkansas and participates in weekly conference calls.

Philadelphia attorney Andy Levine, a former senior assistant regional counsel for the EPA, said the agency’s approach to oil spills can depend on the dynamics of the individuals involved.

“Some people might ask how you can trust any polluter,” said Levine, who is not involved in the Mayflower case. “But the reports I hear is that Exxon is being highly cooperative. I think ExxonMobil may have stumbled a bit at first. But the company got in line fast and gained the respect of the government.”

Levine said the EPA on-scene coordinators he knows are savvy about how they handle oil companies.

“They’re very cynical and they are also highly trained and highly educated,” he said. “They’re not on the site looking for rainbows and lollipops. In working with these companies, they will develop a sense of trust or mistrust. And that is what’s reflected here.”

Pipeline expert Richard Kuprewicz said spills are difficult to measure, whether it’s at the time they happen or after a ruptured pipeline is functional again.

The method that the EPA and Exxon say they are relying on in Arkansas—refilling the line and operating it at the same flow—would indeed help to produce an estimate of the volume that spilled from the Pegasus, he said. But that calculation alone doesn’t factor in such variables as how long it took operators to discover the leak, shut down the pump and then close the valves to isolate the ruptured portion of the pipeline. Oil is still leaving the line as those procedures are going on.

Kuprewicz is the president of Accufacts Inc., a consulting firm that provides pipeline expertise for government agencies and industry. Central Arkansas Water, the Little Rock utility that wants the Pegasus pipeline removed from its watershed, is among his clients.

“You never get an exact number,” Kuprewicz said. “If [Exxon] can measure within a few hundred barrels then that’s a good start.”

“That day will come in court,” Uhlmann said. “It is enough to allege that the spill occurred and violates the Clean Water Act.”

Levine, the former EPA lawyer, said having an accurate estimate is vital not only to levy fines but also to gauge what the remediation effort will entail.

“They are never going to get every billionth of a particle of oil out of the environment in a spill,” Levine said, “but they need to know the quantity so they can answer how clean is clean?”

The spill estimate fluctuated in the first week after the pipeline ruptured.

In a call to the National Response Center, where oil spills must be reported, Exxon said “a few thousand barrels up to 10,000 barrels” were released in the accident that forced 22 families from their homes in Mayflower’s Northwoods subdivision. Exxon told InsideClimate News that only “a few thousand barrels” spilled. The EPA said as many as 7,000 barrels spilled. Thee Pipeline and Hazardous Materials Safety Administration (PHMSA) said 3,500 to 5,000 barrels spilled.

Eventually, Exxon and the EPA agreed on the 5,000-barrel figure.

In an Aug. 12 e-mail to InsideClimate News, Exxon spokesman Aaron Stryk disputed his company’s earlier lower estimate by stating that “we never changed our preliminary estimate of 5,000 [barrels].”

So far, roughly 2,000 barrels of oil have been recovered in Mayflower, Stryk said. That figure includes only oil measured in liquid tanks, where it is mixed with water also pulled from the spill site. Oil recovered from soil, vegetation, and booms, pads, wipes and other debris is not included in that measurement.

Pegasus, which is 20 inches in diameter, moved more than 90,000 barrels of crude oil daily when it was operating. That translates to four million gallons of diluted bitumen.

The section of the line that ruptured on March 29 was operating at a pressure of 708 pounds per square inch. That’s well below its maximum operating pressure of 820 psi, according to PHMSA, which regulates most of the country’s liquid fuel pipelines.

U.S. Attorney Chris Thyer, on behalf of the EPA and Arkansas Attorney General Dustin McDaniel, filed a lawsuit against Exxon in mid-June, less than three months after the spill. It accuses the oil company of violating not only the federal Clean Water Act but also the Arkansas Hazardous Waste Management Act and the Arkansas Water and Air Pollution Control Act.

Aaron Sadler, a spokesman for McDaniel, said the amount of oil spilled isn’t directly related to the state’s case against Exxon.

“The state statutory penalties are tied to the number of days of each violation, not the total volume of oil,” Sadler said. For air and water violations, the penalty clock began ticking on the day of the spill and the days are counted until the harm is remediated.

U.S. Department of Justice spokesman Wyn Hornbuckle said the federal government can’t comment on how spill calculations might affect the federal lawsuit because of the pending litigation. He expects Exxon’s response to the government’s complaint to come as early as Friday.

Numbers compiled by the ADEQ reveal that through Aug. 15, crews collected 12,855 tons of contaminated soil, vegetation, wood chips and debris such as used absorbent pads, wipes and boom from the cleanup site. That area stretches about nine-tenths of a mile from the Northwoods subdivision to the cove of Lake Conway.

More than 1.1 million gallons of oil and water also had been removed from the site through mid-August, according to ADEQ records. That breaks down to 814,800 gallons of nonhazardous oil and water shipped to a refinery in Baton Rouge where some of the oil is being reclaimed. Also, 158,802 gallons of unusable oil and water and 164,388 gallons of water used to decontaminate cleanup equipment have been shipped to a hazardous waste facility in Saline County, Ark.

Five homes in the Northwoods subdivision—ground zero for the spill—still have oil in and around the foundations remain in the “response” stage.

“Exxon is not finished as long as there is recoverable oil,” said Brescia, the EPA’s on-scene coordinator. “That’s the standard. Thats how EPA does it. That’s how ADEQ is doing it. We made it clear to Exxon that as long as people were out of their homes, they were going to be in the response stage.” 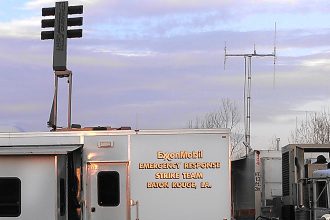