Hundreds of thousands of people filled the streets of New York City in September demanding that world leaders act on global warming in the largest climate demonstration yet.

The passion and desperation of activists to inspire change radiated through the crowd that warm, muggy day.Bill McKibben, an environmental activist and founder of 350.org, one of the main organizers of the event, described the march as a moment for which he had waited his entire career.

“All I ever really wanted was to see a climate movement come together, to see that we were actually going to fight,” he told InsideClimate News. “And finally that day I was fully convinced.”

Despite the massive turnout in New York, global warming advocates suffered a blow just six weeks later when Americans voted a slew of climate change-denying politicians into federal, state and local offices. Republicans took control of the Senate and almost immediately vowed to thwart new and existing climate action over the next two years. One of their biggest targets is the Environmental Protection Agency’s Clean Power Plan to regulate carbon emissions.

The contrasting results encapsulate a complex year for the climate movement in 2014—one filled with very high highs and very low lows—and the major obstacles it still has to overcome to effect change.

This year marked the first major demonstration of how dramatically the quarter-century-old climate movement has changed, diversified and grown. No longer is global warming an issue solely for environmentalists. People from more than 1,000 organizations walked in the People’s Climate March in New York, from trade unions, schools, and faith-based, social justice, student and public health groups, among others. Thousands of activists joined marches in cities around the globe that day.

In fracking, as hydraulic fracturing is known, sand, water and chemicals are pumped at high pressure into underground geological formations to release oil and natural gas. Opponents cite evidence that the technology causes earthquakes, destroys limited supplies of fresh water and results in air and groundwater pollution.

Local environmental, social justice, and other special interest groups worked with mainstream green organizations such as the Natural Resources Defense Council, the Sierra Club and 350.org to fight fracking and pipelines. They held rallies, sit-ins and concerts. In Maine, climate advocates blocked an existing pipeline from transporting tar sands oil to the East Coast.

President Barack Obama took note of the movement’s growing cries for action, rolling out several elements of his climate-change strategy, including energy efficiency initiatives and climate adaptation programs. He launched the Clean Power Plan to cut carbon emissions from power plants. Global warming was also a main topic of conversation in his trips overseas, particularly in China where he announced a joint deal between two of the world’s largest carbon polluters to cut greenhouse gases.

In Washington, climate leaders helped block the passage of a bill that would have fast-tracked a decision on the Keystone XL pipeline, which remained one of the movement’s most powerful rallying issues. The proposed pipeline would carry 830,000 barrels of carbon-heavy tar sands oil every day from Alberta to Texas refineries. This was where advocates saw some of their biggest wins, including a delay by Obama on making a decision about the project and the challenge to the legality of using eminent domain to build it.

“The movement today looks nothing like it did just a few years ago,” said Jane Kleeb, director of Bold Nebraska, a grassroots group leading the fight against the Keystone XL. “There are unlikely alliances now, ones I couldn’t have predicted, and we’re stronger than ever.”

At the same time, public opinion hasn’t shifted significantly on the issue. The majority of Americans still don’t see taking steps to stop or adapt to climate change as a political imperative. According to an October Gallup poll, climate change ranked last among voters’ priorities this year. That showed in the sweeping victory in November by the GOP, which generally frames such steps as needless job killers.

Environmental groups spent $85 million supporting climate-conscious politicians. While that was a small amount compared with the hundreds of millions of dollars that oil and gas interests like the Koch Brothers spent, their efforts did help make climate change an issue in several congressional races, such as in Florida and Colorado. In the end, however, education, taxes and the economy trumped climate in the ballot box. Young voters who are generally the most supportive of climate action didn’t vote in large enough numbers.

Climate advocates now face what some experts say is the worse political situation for Congressional action in more than eight years.

Republicans won 24 out of 36 open Senate seats in this year’s elections, giving them a new 54-44 majority. Some of Congress’s climate deniers—including Jim Inhofe of Oklahoma—will chair or sit on the environment and science committees charged with shaping global warming and energy legislation. With the House also controlled by Republicans, any significant federal action on global warming will probably have to come from the White House.

“The November election exposed the limits of this movement,” said Bob Wilson, an environmental historian at Syracuse University. “Yes, more people are taking to the streets, and the People’s Climate March was an amazing achievement, but there are wide swaths of this country that still don’t care about this issue. The movement needs to figure out how to get them on board.”

The main missed opportunity, Wilson said, has been engaging people in places like Florida that will be hit hardest by climate change.

“I’ve been reading about ‘game-changing moments’ or the movement ‘turning a corner’ for 10 years,” said Robert Brulle, an environmental sociologist at Drexel University. “But it seems as though we’ve turned so many we’re just going in circles. There’s still a lot of work to be done. I think that became abundantly clear in 2014.”

Environmental leaders told InsideClimate News that the movement needs to build on the momentum gained in 2014. The way to do that, said McKibben, the environmental activist and founder of 350.org, is by maintaining and expanding the strong and diverse collaborative relationships formed in organizing the People’s Climate March.

“Like any relationship in your life, you have to nurture and value it,” said Michael Brune, executive director of the Sierra Club. Otherwise, all the progress could be in jeopardy, he said. 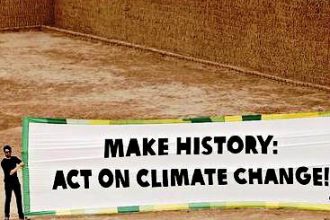 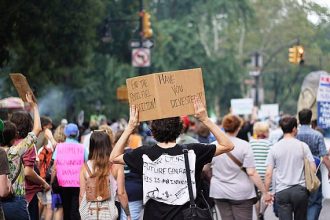