This story was updated at 10:45 am ET on March 24 to include comments from President Donald Trump, TransCanada.

The White House’s approval of the Keystone XL pipeline Friday opens a fierce, new battle over a project that has become a front in the fight against climate change.

President Donald Trump made reviving the 1,200-mile pipeline, which will transport heavy crude oil from tar sands mines in Canada to refineries on the Gulf Coast, a key plank of his fossil fuel-focused energy plan. He promised in January to reverse President Barack Obama’s rejection of the TransCanada project, one of Obama’s signature environmental decisions, within 60 days. The president just beat the deadline.

“It’s going to be an incredible pipeline, the greatest technology known to man or woman,” Trump said Friday in a signing of the project’s presidential permit, flanked by TransCanada officials, pipe suppliers and union leaders. “It’s a great day for American jobs and a historic moment for North America and energy independence.”

The Trump administration’s hasty approval is expected be the basis for court challenges by environmentalists. Groups say they will argue the administration sidestepped the law by failing to conduct a new and thorough environmental analysis with public comment before making its decision. The approval, they say, was based on an Obama environmental review when oil prices were much higher than they are today.

“Whenever Congress or TransCanada or its lobbyists have tried to create shortcuts to expedite approval, it tended to backfire and cause the process to be longer,” said Anthony Swift, director of the Natural Resources Defense Council’s Canada project. “We’re seeing that again with the [administration] making a decision on the basis of an incredibly outdated environmental review.”

Meanwhile in Nebraska, long ground zero of the opposition, landowners who do not want the pipeline near their property will argue their case before the state Public Service Commission in hearings this spring on whether the proposed route protects the public interest. Years of  resistance there led TransCanada to move the 830,000-barrel-a-day pipeline out of the Nebraska Sandhills, a fragile ecosystem that overlies the Ogallala aquifer. Many wanted the project scrapped altogether.

Protests are scheduled to take place on Friday in front of the White House as well as Trump International Hotel in New York. “This pipeline won’t be built,” the grassroots climate action group 350.org said on Twitter. “People stopped it once & will again.”

President Obama rejected the project in November 2015, largely on grounds that the carbon-heavy tar sands crude it would transport would contribute millions of tons of extra carbon dioxide to the atmosphere each year. “If we’re going to prevent large parts of this earth from becoming not just inhospitable, but uninhabitable…we must act not later, not someday, but right here, right now,” Obama said.

His administration also said blocking the project would send a powerful signal to the world of the U.S. commitment to the Paris climate treaty.

When asked if approval of the pipeline would undermine U.S. climate leadership, State Department spokesman Mark Toner said, “That’s not fair. This administration is conducting a review of climate change policy, but our record on this issue speaks for itself. We have been a leader addressing climate change globally, regardless of this decisions that’s made with respect to the Keystone application.”

Since arriving in Washington, the Trump administration has mounted a relentless campaign to defeat climate policies needed to meet the Paris treaty’s goal of shifting rapidly away from fossil fuels. The Keystone XL is seen as a test of the nation’s commitment to action.

The State Department advises the president on whether cross-border projects like the Keystone XL are in the national interest. But Secretary of State Rex Tillerson, who supported the pipeline as former chief executive of the oil giant ExxonMobil, recused himself from the pipeline decision.

The Obama administration’s environmental review of the project, the basis for the Trump administration’s decision, was completed by the State Department in January 2014 when oil was more than $100 a barrel. The economics shaped its environmental conclusions. The State Department found that with or without the project, the relentless boom of Canada’s tar sands enterprise would continue, suggesting that no single pipeline would worsen climate change. “The general assessment was that any one project was not likely to affect the rate of oil sands growth,” said David Hayes, an attorney with the Sierra Club. “With oil prices this high, it’s all bound to come out of the ground somehow.”

With oil now around $45 a barrel, many oil sands projects have become unprofitable and several large oil companies have turned away from the sector. The sharp decline in oil prices has led several observers (including the EPA in 2015) to question the State Department’s controversial conclusion, and whether it is now more likely that the pipeline would significantly increase emissions of greenhouse gases.

Also, more is known about the difficulties in cleaning up pipeline spills of diluted bitumen—the blend of thick Canadian crude that would be shipped by the pipeline—after a review of studies published last year by the National Academies of Science.

Environmentalists will argue that under the National Environmental Policy Act (NEPA), the change in oil economics and new scientific analysis are the kind of “significant new circumstances” that require a supplemental environmental analysis. Under NEPA the public comment process takes at least 75 days and often takes months or years.

“It’s very, very difficult to imagine a legally defensible decision on the basis of this review” by the Trump administration, Swift said. “And if we see a legally indefensible approval, we will challenge that.”

Calgary-based TransCanada also faces the challenge of winning approval for its proposed 275-mile pipeline reroute through Nebraska. The five-member Nebraska Public Service Commission has said it does not expect to make a decision before September on TransCanada’s application for a state permit.

TransCanada’s chief executive, Russ Girling, demurred in the signing when Trump asked him when construction would start, saying the company faced the permitting process in Nebraska. “I’ll call Nebraska,” Trump said. “They have a great governor…I’ll call him today.” But the courts in Nebraska have ruled that it is not the governor’s decision alone, but that of the public service commission, which must hold hearings on whether the pipeline is in the interest of Nebraskans.

TransCanada also will need the commission’s approval before it can use eminent domain to secure rights of way on private property. The company has to wait until September 2017 to renew the eminent domain proceedings. It had been barred for two years from doing so after it abandoned the dealings in September 2015, just before the Obama administration denied the federal permit.

Nebraska landowners and other opponents have registered to intervene in the proceedings.

Sara Schor, manager of the U.S. Keep it in the Ground campaign for 350.org, said that her group would join the resistance against the pipeline in Nebraska, among Native American tribes in South Dakota, and would highlight the Keystone XL at the People’s Climate March in Washington, D.C. on April 29.

“I think Trump approving the federal permit on this pipeline is only going to mobilize thousands and thousands of more people to be involved in this fight,” she said. “And by this fight, I don’t mean just Keystone, but hundreds of other fossil fuel projects across the United States.”

Trump, who has called climate change a hoax and whose White House delivered a budget proposal slashing climate programs at both the State Department and the Environmental Protection Agency, has touted the Keystone XL as a linchpin in his plan to boost jobs by lifting restrictions on the fossil fuel industry.

In a speech at a fundraiser this week, Trump repeated his frequent claim that the Keystone XL will be built with U.S.-made steel. TransCanada has said it purchased most of the steel for the project already, including from the Canadian foundry of a Russian steel company and from Indian and Italian firms. (India-based pipeline supplier Welspun attended the signing.)

Environmentalists said that in addition to arguing that the pipeline would exacerbate climate change and safety risks, they will challenge Trump’s claims that the Keystone XL would bring jobs and lower gas prices. (The Obama State Department concluded it would create few permanent jobs, and some economists argue the refined oil is destined for export to Asian markets.)

“This dirty and dangerous export pipeline would run right through America’s heartland, threatening our water, our land, and our climate—all to pad the profits of a foreign oil company,” said Tiernen Sittenfeld, senior vice president for government affairs for the League of Conservation Voters. It is “all risk and no reward, and we will continue to fight it every step of the way.” 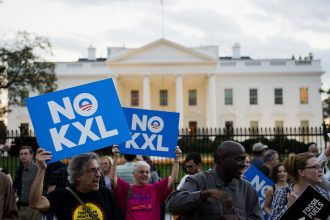