President Donald Trump’s budget plan for fiscal year 2018 systematically takes a knife to climate research and programs across the government.

Office of Management and Budget Director Mick Mulvaney even said so during a press briefing announcing the budget proposal on Tuesday.

“What I think you saw happen during the previous administration, the pendulum went too far to one side, where we were spending too much of your money on climate change and not very efficiently,” Mulvaney told reporters at the White House. “We don’t get rid of it here. Do we target it? Sure. Do a lot of the EPA reductions aim at reducing the focus on climate science? Yes.”

The much-anticipated budget plan puts an end to any uncertainty about how the Trump administration prioritizes issues such as climate change and the environment. Building off of a preliminary budget proposal released in March, this detailed proposal makes clear that responding to global warming is not a priority.

The fate of each federal climate-linked program is detailed across dozens of recently released budget documents.

Each agency also produced its own itemized budget.

The Environmental Protection Agency would see its total funding slashed from $8.2 billion in 2016 to $5.7 billion in 2018, a cut of 31.4 percent. The agency’s staffing would also be cut by 25 percent to levels not seen since the late Reagan administration.

Up for elimination is EPA’s Global Change Research program, which develops science information to help policymakers, the public and others respond to climate change. “The elimination prioritizes activities that support decision-making related to core environmental statutory requirements,” the Trump EPA wrote in its 756-page budget justification document to Congress.

An additional 15 climate-related programs involving EPA partnership with outside groups are also up for eradication, such as the State and Local Climate Energy Program, for helping craft policies to reduce carbon pollution and other environmental goals, and the Global Methane Initiative, an effort to cut methane emissions and harness the gas for energy. These details are largely consistent with the president’s so-called “skinny budget” and with details that have leaked to the public since.

Trump’s budget proposal faces a rough road ahead in Congress, with opposition both on his proposed cuts to popular programs and on his plan’s likely effect of widening the federal deficit.

The plan assumes economic growth of 3 percent per year, in terms of real GDP growth, far more than the Congressional Budget Office’s forecast of 1.9 percent. The Federal Reserve, the International Monetary Fund and others project even slower growth.

“This is the President’s plan, but it is Congress that decides how much funding federal agencies will ultimately receive,” said Rush Holt, chief executive officer of the leading science trade group American Association for the Advancement of Science, in a statement. “We stand ready to work with Congress to ensure [research and development] investment remains a priority.”

Another big target in the budget is funding for renewable energy, energy efficiency and clean technology.

The Department of Energy’s Office of Energy Efficiency and Renewable Energy would see a 69 percent cut under Trump’s budget plan, from $2 billion to $636 million—the largest cut of all energy program offices. Its research and development in clean cars and renewables would be cut by more than 70 percent. Weatherization programs would be eliminated.

EPA’s popular Energy Star program, designed to help people and businesses save money by wasting less energy, is up for elimination. And the Energy Department’s Advanced Research Projects Agency-Energy (ARPA-E), which is devoted to investing in energy research and development, would be slashed by 93 percent.

At the National Aeronautics and Space Administration, an agency whose total budget would be cut less than 1 percent compared to 2016, climate and earth science is on the chopping block.

The five NASA earth science missions up for termination include one to track the distribution of carbon dioxide on Earth and another explicitly aimed at better understanding climate change. Under the budget plan, less grant money would also be available for other Earth-focused research compared to past years. Funding for space missions and research, however, would get a boost.

Climate and Land Use

Funding and support for climate science at the Interior Department will also be downsized.

According to Interior Secretary Ryan Zinke, “there was duplicative and redundant programs across the board on climate” and the outcome “is consolidating some of the efforts to make sure we are more focused.” The budget specifically proposes reorganizing and renaming the United States Geological Survey’s Climate and Land Use Change program. The revamped effort, to be called the Land Resources program, would break into three sub-categories: the National Land Imaging Program, the Land Change Science Program and the National and Regional Climate Adaptation Science Centers.

More cuts to climate programming are on deck at the United States Agency for International Development (USAID) and State Department.

Trump’s budget specifically calls for eliminating the Global Climate Change Initiative (GCCI), a broad program that includes the U.S. contribution to the United Nations Framework Convention on Climate Change, and to climate-related bilateral efforts, such as partnerships with China. The budget plan also zeroes out U.S. contributions to the Green Climate Fund, which helps developing countries prepare for and respond to climate change.

The Department of Agriculture’s budget, under the Trump proposal, would see a cut of $6 billion, from a projected $24 billion in discretionary spending in 2017. The agency’s budget request also calls for a staff reduction of nearly 5,300 out of the agency’s more than 100,000 employees.

“I don’t think there’s any way to sugar coat this,” Agriculture Secretary Sonny Perdue said in a call with reporters Tuesday. “When times are tough, we’ll just dig deep and do more with less.”

The budget of the USDA’s research wing, which does the bulk of the agency’s climate research and houses its major competitive research grant program, would drop from $3.2 billion in 2016 to $2.5 billion in 2018. The proposal calls for shuttering 17 of the agency’s Agricultural Research Service facilities, out of a total of 90. The agency’s Natural Resources Conservation Service, which helps farmers implement soil and water conservation programs, also takes a hit under this proposal, dropping from more than $1 billion in 2016 to $766 million in 2018 discretionary funding. Most of those proposed cuts come from watershed preservation programs.

The USDA’s proposal mentions climate change only once, while the Obama administration’s last budget proposal, in 2016, directed its research departments to make climate change a priority and boosted funding for climate change research under the Agricultural Research Service by $19 million.

Environmental and science advocacy groups have so far reacted with horror and outrage to the budget proposal.

“The new proposed budget is based not on evidence, but on ideology. It ignores the wealth of evidence that shows that protecting human health and the environment is good for people, the economy and national security,” Sam Adams, U.S. director at the World Resources Institute, said in a statement. “This budget should be a nonstarter in Congress, whose members have a responsibility to follow an evidence-based approach to policymaking.” 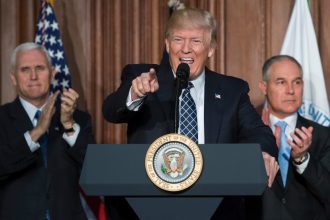