A well-heeled coalition of investors is asking top fossil fuel companies to calculate the risks of plowing billions into new oil, gas and coal projects. They fear that carbon emission limits and slowing demand will turn them into bad investments that leave investors worse off.

The requests, contained in letters sent to 45 companies last month, are part of an initiative aimed at persuading oil producers and others to rein in their quest to stockpile more carbon energy. They hope to do so by tapping into growing concerns that climate policies and market factors could prevent companies from selling all of their reserves of fossil fuels, which are still growing fast.

Companies with large amounts of such “unburnable” carbon resources could see their stock prices slashed, clobbering the value of investment portfolios that hold the shares. By one estimate, as much as 30 percent of the value of some of the world’s stock exchanges is in proven fossil reserves.

In the letters, the coalition asks the companies to examine and disclose their “exposure to the risks associated with current and probable future policies for reducing greenhouse gas emissions by 80% by 2050.”

The initiative is potentially groundbreaking because it comes at a time when a growing number of large shareholders of energy producers are similarly questioning whether costly projects that are underway or on the drawing board will pay off. That rare alignment of interests could convince company boards to weigh the risks of strict climate policies alongside other factors as they review projects.

“We came to this with the goal of really changing the investment behavior of these companies in the mid- to long-term horizon,” said Andrew Logan, director of the oil program at Ceres, a nonprofit that organizes businesses and investors interested in climate change and other issues.

“We have real optimism because we’re operating in a context where there’s actually a lot of dissatisfaction with how the fossil fuel industry is being run—and that’s really different from four or five years ago, when the companies were seen as sort of bulletproof.”

That’s what helped the initiative win the backing of 70 institutional investors, representing about $3 trillion in assets. The list includes large pension funds from California and New York, as well as investment firms in Scotland, Great Britain and Australia. Ceres launched the project along with the Carbon Tracker Initiative, a nonprofit that links capital markets to climate issues. The groups announced the initiative Thursday in a press conference.

The campaign elevates the discussion of “unburnable carbon,” a term coined by The Carbon Tracker to describe a relatively new concept borne out of scientific research that’s now being championed by a host of other groups worried about climate change. It highlights the possibility that national and global agreements to limit carbon emissions would force fossil fuel companies to leave large oil and coal deposits in the ground because burning them would exceed the limits. That’s a development that would “strand” those assets and erase their value.

“This is either delusion or wishful thinking on the part of some folks who just don’t like fossil fuels,” he said. “There’s just no justification for that argument. The notion that somehow [oil] is somehow unburnable—from the perspective of keeping people warm, keeping economies going and so on, the reality of this is really clear.”

The initiative’s central question—whether it’s prudent for fossil fuel companies to continue investing based on business-as-usual scenarios—is now being asked by analysts at Wall Street firms such as Goldman Sachs, Citigroup, HSBC, Sanford C. Bernstein Ltd. and others.

A January report from HSBC underscored the potential impact of unburnable reserves by estimating that emissions caps and lower oil prices could put up to 60 percent of the market value of certain European companies at risk. “We believe that investors have yet to price in such a risk, perhaps because it seems so long term,” the report noted. “However, we believe it does give an indication of the potential impact on the sector.”

Increasingly, industry analysts are also worrying about demand projections for oil and other fossil fuels, not just pending climate laws.

What if China’s energy demand falls well short of the industry’s lofty expectations?  What happens to oil if natural gas displaces it in more markets? Can oil and gas companies continue bankrolling the soaring expenses of both new projects and current production without threatening the quarterly payouts investors have relied on for decades? What happens to all those hard-to-reach reserves if world oil prices sink below break-even levels?

“It’s a really different world where you have big mainstream analysts saying that it’s not peak oil supply that we should be concerned about—it’s the reverse, peak oil demand,” said Craig Mackenzie, head of sustainability at the Scottish Widows Investment Partnership, which manages $234 billion in assets. The firm owns stock in fossil fuel companies (except coal), and is one of the companies backing the new Ceres initiative.

For instance, in a new report called “Global Oil Demand Growth—The End is Nigh,” Citigroup disputed the broadly held belief that the world’s thirst for oil will continue its inexorable rise through to 2030. The study was based on assumptions about fuel efficiency improvements that are already planned for the United States, Europe and China and the steady shift to natural gas-powered commercial vehicles.

Under Citigroup’s analysis, Mackenzie said, “You get global oil demand potentially peaking around 2020, which is a very different story than you get from oil industry forecasts.”

But the biggest question for concerned investors is how climate policies will unfold. If governments don’t implement tough climate laws, then fossil fuel companies could burn through their reserves as planned providing other factors don’t intervene. However, if national or global policies require steep cuts in the use of fossil fuels, they could gut the value of those companies that get stuck with unburnable resources they can’t cash in.

The outlook for companies laden with coal is particularly troublesome, analysts say. Mackenzie cited a Bernstein & Co. report that noted that coal demand is falling everywhere except China, and that coal demand there will begin to fall by 2017. New efforts to cut worldwide carbon emissions would accelerate that downward shift, since coal can have three times as much embedded carbon than other fuels.

In the United States, a mix of plummeting demand and environmental restrictions on harmful emissions has already stranded coal deposits that can’t be burned. That shift caused the share prices of coal companies to fall by two-thirds over the last two years, Mackenzie said.

Predictions for natural gas are far rosier, at least in the short term, since it is replacing the use of coal and oil in many industries.

“These concerns about climate impacts have been around for awhile,” said Logan from Ceres. However, he said, the potential climate costs are starting to resonate more broadly with fossil fuel industry investors and the companies themselves. The theory about stranded carbon assets, he added, “has risen from what was seen as a fringe issue a very short time ago, to now firmly being in the mainstream.”

What’s made the difference is the magnitude of what’s at stake, according to Mackenzie of the Scottish Widows Investment Partnership.

“We’re talking about trends that are massively significant to share prices,” he said. “We’re moving to a space where these issues are just much, much more material than they have been.”

The Origins of the Debate

Today’s debate over the financial impacts of burning fossil fuels recklessly has its roots in a landmark 2009 climate paper by scientists led by Malte Meinshausen, a climatologist at Germany’s Potsdam Institute for Climate Impact. The researchers found that at the current rate of fossil fuel use, dangerous warming—surpassing the two degree Celsius limit—could hit the globe in as few as 11 years.

MORE: The Most Influential Climate Science Paper Today Remains Unknown to Most People

The paper included another startling conclusion: That burning all the proven and economically retrievable fossil fuel reserves already claimed by oil, gas and coal companies would add enough carbon to the atmosphere to “vastly exceed the allowable CO2 emission budget for staying below 2C” of warming.

That got the attention of the international financial community, because the values of the world’s energy companies are linked to future earnings from selling oil, gas and coal stockpiles that scientists now suggest might have to remain underground.

Since then, the findings have given rise to often-cited reports by the Carbon Tracker group of London. Environmental activist Bill McKibben, founder of the activist group 350.org, also expanded on the 2009 paper’s conclusions in a Rolling Stone article and launched a speaking tour around the theory.

Last month, the concept of stranded and unburnable carbon resources gained the endorsement of the United Nations Intergovernmental Panel on Climate Change, or IPCC, the world’s largest scientific body on global warming. The latest IPCC report embraced the view that existing reserves of fossil fuels contain more carbon than what can be burned without exceeding 2 degrees of warming.

Building on that and other publicity, the Ceres-led initiative is now taking the issue to the board rooms of BP, ExxonMobil and other top fossil fuel producers.

“We need to understand how the companies think about these risks, how they prepare for them, and how they’re taken into account in their capital investment plans,” said MacKenzie of the Scottish investment company.

Logan, the director of Ceres’ oil program, said the responses have been encouraging so far.

“We’ve seen very few companies dismiss the issue out of hand,” he noted. “Lots of them essentially acknowledge that there is a real tension between their long-term business plans and any attempt to deal with climate change. That, to me, is a constructive place to start.” 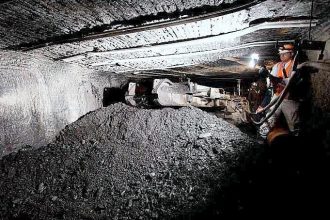