WASHINGTON—With a couple of lines tucked into his State of the Union speech this month, President Obama pitched the tent for a three-ring circus starring advocates with competing agendas: controlling greenhouse gases, expanding fossil fuel development and conserving open spaces.

The idea Obama proposed would siphon $2 billion from the swelling oil and gas royalties the government expects to collect over the next decade and devote it to federally sponsored clean-car research that has been starved for cash. The question is what he will have to give up in negotiations to get what he wants.

“Much of our new-found energy is drawn from lands and waters that we, the public, own together,” he said in the speech. “So tonight, I propose we use some of our oil and gas revenues to fund an Energy Security Trust that will drive new research and technology to shift our cars and trucks off oil for good.”

The program Obama wants to bolster pays for research into batteries and other technologies that could expand the use of efficient, affordable cars that emit little or no carbon dioxide. Nearly every hybrid electric vehicle sold in the United States uses batteries developed in part through the Energy Department. But like other spending aimed at confronting climate change, the program is anathema to many conservatives.

Obama’s sweetener—paying for clean-car research with drilling royalties—immediately attracted praise from those who favor more drilling and see it as an opening to expand drilling to areas where it is currently prohibited. But it has raised the hackles of some land conservationists, who have long fought for more royalty money to flow into the Land and Water Conservation Trust, which they say has been underfunded for years.

Like all spending decisions, the amount to be provided for clean energy research and the uses to be made of royalties are matters that only Congress, with its power of the purse, can decide.

What this all presages is an intense period of backroom horse-trading among parties who have long mistrusted each other, and who all have as much to lose as to gain.

“Obama is setting up the pieces for a game of chess,” said David Friedman, a clean vehicles expert at the Union of Concerned Scientists.

Sam Ori, director of policy for Securing America’s Future Energy, or SAFE, the group that first came up with the funding plan that Obama endorsed, was more blunt: “We believe there has to be something in a program like this for Republicans,” he said. “Otherwise it is not going to go anywhere.”

SAFE is a group of leading business executives and retired generals, admirals and diplomats dedicated to maintaining reliable sources of domestic energy and minimizing the nation’s exposure to price disruptions.  In his speech, Obama embraced SAFE’s ideas without reservation.

“If a non-partisan coalition of CEOs and retired generals and admirals can get behind this idea, then so can we,” Obama said. “Let’s take their advice and free our families and businesses from the painful spikes in gas prices we’ve put up with for far too long.”

What the president did not mention is that SAFE’s plan expressly recommends expanding drilling on public lands, even in off-limits areas like the Arctic National Wildlife Refuge that he has previously pledged to protect.

As envisioned in a detailed report issued in December by SAFE’s leadership council, the Trust would be “seeded with revenues from the development of oil and natural gas in federal lands currently inaccessible to industry due to either Congressional or Administrative action. These areas include: the Pacific, Atlantic, and Eastern Gulf of Mexico planning areas of the federal Outer Continental Shelf (OCS) and the 1002 area of the Arctic National Wildlife Refuge (ANWR).”

The 1002 area of the refuge, named after a section of the governing statute, comprises 1.5 million acres of coastal plain that contain substantial oil and gas reserves as well as prime wildlife habitat.

The day after Obama’s speech, Robbie Diamond, SAFE’s president, called the moment “a unique opportunity to have our cake and eat it too.”

But in the days that followed, White House officials distanced themselves from that part of SAFE’s plan, saying the administration would rely on cash flow from existing leases.

A White House official, speaking on background, said the administration has no plan to open the refuge to drilling or to go beyond its current five-year plan for offshore leasing. Indeed, the Interior Department is putting the final touches on a plan that recommended, in its first draft, designating as untouchable wilderness the very section of the wildlife refuge that SAFE wants to open up.

SAFE expects the details to be a matter of continuing negotiation, according to Ori. “We are interested in continuing to work not just with the White House but on the Hill, hopefully to get to something that both sides can support,” he said.

The existing leases currently pay royalties of roughly $12 billion a year. About half of that money goes to the states—leaving more than enough to provide $200 million a year for the Energy Department, according to the White House’s reckoning.

But this is not a scheme that Obama can impose by fiat. To set aside a chunk of that money for clean energy research would require Congressional action. And Congress is sure to have ideas of its own when it comes to funding for clean energy research, access to oil and gas on public lands, and spending to set land aside for conservation—for decades another principal use for royalties.

In general, SAFE’s approach comports well with the president’s broad energy prescriptions, which he likes to sum up in the phrase “all of the above.” He slipped the phrase into his speech to Congress, although it was not in the written draft released by the White House moments before he spoke. And even as he pledged to take actions to confront climate change, he promised to “keep cutting red tape and speeding up new oil and gas permits.”

Sen. Lisa Murkowski of Alaska, the ranking Republican on the Senate Energy and Natural Resources Committee, was quick to support the president’s plan—but, like SAFE, she said it should expand drilling to restricted areas.

“I proposed this idea in my Energy 20/20 blueprint that I released last week,” she said in a statement released the day after the president’s speech. “Under my Advanced Energy Trust Fund proposal, new production on previously closed federal lands could provide a substantial source of new revenue to fund research on the most promising new energy technologies, while paying down the national debt. I intend to get to work on this as soon as possible.”

Friedman, of the Union of Concerned Scientists, said Obama’s proposal would significantly increase the amount of money the administration has been able to set aside for green technology—about a 10 percent increase in Energy Department spending for energy efficiency and renewables overall, he estimated, and a 25 percent bump in the transportation account.

But Roland Hwang, an energy and transportation expert at the Natural Resources Defense Council—in a blog post calling the clean fuel research spending “an excellent idea”—said it should be paid for not by diverting royalties, but by eliminating subsidies for the oil and gas industry, which run into billions of dollars a year.

The research would focus mainly on improving batteries. But it would also address such obstacles as lightweight materials, lubricants, and biofuels, and, down the road, fuel cells running on hydrogen.

The most notable goal, a project called EV Everywhere, is “to be the first nation in the world to produce plug-in electric vehicles that are as affordable for the average American family as today’s gasoline-powered vehicles within the next ten years,” said David Danielson, assistant energy secretary for renewables, in a message last month.

“I am more convinced now than ever that we can capture this opportunity, and I am committed to making the strategic investments necessary to get there.”

It is the kind of R&D that has long been a staple of Energy Department budgets under Democrats and Republicans alike, and that the Obama administration emphasized throughout its first term.

Under the stimulus spending program at the start of the administration, the Energy Department had lots of money to spend on innovative research. But that budgetary bulge has ended, the current year’s budget has allowed no growth, and like the rest of the government, the agency could face sharp cuts in the months ahead.

“Establishing a guaranteed source of funding will allow the Energy Department to maintain targeted and sustained investments that are catalytic and directly advance U.S. energy security,” said a White House fact sheet on the new proposal.

Advocates of expanding conservation lands for public use are already raising their eyebrows at the notion of establishing “guaranteed” uses for drilling royalties. They say that for decades Congress has broken its promises to set aside royalties from offshore drilling for the Land and Water Conservation Fund.

Under a long-standing law governing offshore drilling, LWCF is authorized to get $900 million a year from drilling royalties. But like any other spending program, that is subject to annual appropriations bills.

According to the Land Trust Alliance, a coalition of conservation groups, Congressional appropriators “have consistently withheld much of that funding, shortchanging the program by some $17 billion over the past 46 years.” Obama managed to get $432 million added to the fund in 2010, before Republicans seized control of the House. But the annual contribution has been reduced since then, and like all federal spending, prospects for the rest of this year are uncertain.

A bipartisan group of lawmakers has been pushing legislation that would offer a “permanent fix” for the land conservation fund’s problems—in effect, giving the program a dedicated stream of royalty income, just as Obama is proposing to do for electric-vehicle research. It would make the full $900 million available each year without further appropriation—an ironclad guarantee that would prevent that portion of the royalties from being diverted to clean cars, to deficit reduction or for any other purpose.

Partly because the Land and Water Conservation Fund is shared with state and local governments for popular recreational uses, it enjoys broad bipartisan support, and its backers will be jealous of any attempt to divert this money to other purposes.

So they, too, may have to be accommodated if a deal is ever to be struck. 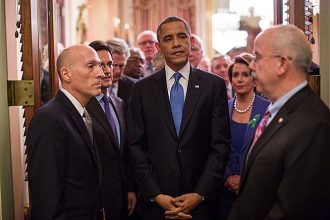