WASHINGTON—When the State Department hired a contractor to produce the latest environmental impact statement for the controversial Keystone XL pipeline, it asked for a Web-based electronic docket to record public comments as they flowed in each day. Thousands of comments are expected to be filed by people and businesses eager to influence the outcome of the intense international debate over the project.

But the public will not find it easy to examine these documents.

A summary of the comments will be included in the final version of the environmental impact statement when it is released, said Imani J. Esparza of the Office of Policy and Public Outreach in State’s bureau of oceans, environment and science.

But the only way to see the comments themselves is by filing a request under the Freedom of Information Act, or FOIA, a process that can take so long that the Keystone debate could be over before the documents are made available.

The public will not be able to access the full electronic docket on line.

The State Department “is doing no more than what they have to do, at a time when most other agencies are moving proactively toward timely disclosure,” said Katie Greenhaw, an expert in the regulatory process at the Center for Effective Government, which advocates for public involvement and openness. “This is not meaningful engagement.”

Federal electronic dockets are routinely opened to the public in other circumstances. For instance, people who want to comment on the Environmental Protection Agency’s proposed rules to control pollution under the Clean Air Act can go to Regulations.gov—a site that handles public comments for federal agencies. Not only can they file their own comments, but they can also read any other comment that has been filed.

But comments about draft environmental impact statements do not appear there. A worker at the website’s help desk said that’s because the statements are considered draft documents, not proposed regulations.

“The State Department should post these on line the way most agencies do,” said Pat Parenteau, a professor of environmental law at the Vermont Law School.

Robert L. Glicksman, a professor of environmental law at George Washington University Law School, said the spirit of the regulation that governs access to environmental reviews under the National Environmental Protection Act (NEPA) is to encourage public engagement in matters of great significance, such as the Keystone dispute. To keep documents under wraps can “squelch meaningful public participation,” he said.

Last week, InsideClimate News filed a formal FOIA request seeking the release of the most significant comments—those expected from the major adversaries in the long-running dispute. In its petition, ICN urged the State Department to speed the documents’ release under an expedited procedure that is allowed when news organizations seek documents of significant public interest at a time when important government decisions are being made.

The public has been given 45 days to comment on the environmental review, which was released on March 1.  The report has been sharply criticized by environmentalists for underestimating the climate impacts of the pipeline and unfairly tipping the scales in favor of approval. The pipeline will carry fuel from Canada’s oil sands region into the United States.

The rule governing public comments in this matter says that agencies are to “make environmental impact statements, the comments received, and any underlying documents available to the public pursuant to the provisions of the Freedom of Information Act.”

That includes comments from other federal agencies, like the EPA, which has criticized the State Department’s previous environmental reviews. The EPA routinely makes public its own comments without need for any FOIA request. The agency’s office of enforcement and compliance, which has the important role of issuing report cards grading other agencies’ environmental impact statements, publishes such documents on its own website during public comment periods.

ERM will also help the State Department manage the public response in other ways, such as arranging any public hearings, summarizing the comments and incorporating changes based on them into the final report.

Last week Mother Jones reported that the State Department had redacted the biographies of three ERM employees before posting the consulting contract on the agency’s website. Mother Jones obtained the full biographies, which revealed that the ERM employees had previously worked for TransCanada, the company applying for the permit to build the pipeline, and other industry giants with interests in Canada’s oil sands, including Exxon, BP, ConocoPhillips, Shell and Koch Industries.

After the environmental review is complete, the public will have another chance to weigh in on the Keystone project. This time the State Department will consider the broader question of whether building the pipeline is in the “national interest.”

During that phase, too, the agency will consider public comments—but the process will likely be even more opaque, because there are no clear guidelines for that phase, as there are for NEPA assessments. In a 2011 go-around of the national interest process, people who spoke at hearings or commented in writing complained to InsideClimate News that their comments were falling into a black hole, not fully considered by the department or in many cases were lost.

In that case, too, the State Department was criticized for hiring a firm tied to TransCanada, Cardno Entrix, to handle the comments. 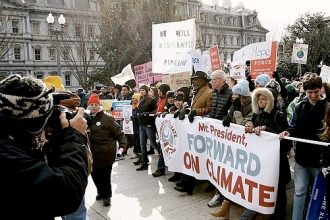 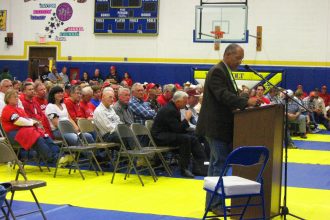