The southern leg of ExxonMobil’s idled Pegasus oil pipeline, a segment regulators say is susceptible to seam ruptures, might be restarted as early as this week. Residents along the pipeline and others, however, have no idea whether—or how—the pipeline has been made safe because the information is not publicly available.

“We’re all still in the dark,” said Carl Weimer, executive director of the Pipeline Safety Trust, a nonprofit watchdog group based in Bellingham, Wash.

In a Jan. 31 letter seeking clearance to reopen the 63-year-old Pegasus southern section, Exxon told the federal Pipeline and Hazardous Materials Safety Administration (PHMSA) that it “intends to initiate restart activities no later than March 28, 2014.” A copy of the two-page letter was provided to InsideClimate News by PHMSA, but it is one of many important documents that have not been publicly released or made available on the agency website dedicated to Pegasus updates. One of those key documents, the restart plan for the southern leg, is still being withheld.

“I think it’s terrible that there’s something going on that affects people’s lives that you really can’t get any information about,” said Barbara Lawrence, who said the Pegasus passes under the Richland-Chambers Reservoir, where she lives on the south shore. “Information is very hard to come by … if you’re just an average person going about your life, you know nothing [about the Pegasus]. But you should know about it, because it affects you.”

The 858-mile Illinois-to-Texas Pegasus pipeline has been closed since last March, when its northern segment burst in Arkansas, dumping Canadian heavy oil into a suburban neighborhood and nearby cove. Post-spill testing showed that the rupture stemmed from defects that date back to the 1940s-era fusing technique used to make the northern Pegasus pipe.

On Monday, Exxon spokesman Aaron Stryk declined to comment on the March 28 target date for restarting the southern section. He said the line would reopen “only after PHMSA approves it.”

Last May, PHMSA turned down Exxon’s first request to restart the 211-mile southern section in Texas because both pipeline segments are more than six decades old; both are susceptible to seam failures; and both had at least one seam failure during pressure tests. PHMSA also questioned the adequacy of Exxon’s previous inspections, and noted that there was “uncertainty as to the current seam integrity on the entire Pegasus Pipeline.”

What’s changed since then? Has Exxon conducted additional tests or changed its risk assessment procedures? Has it proved to PHMSA that the southern leg is not prone to seam failures? Answering those questions is a tough task because PHMSA and Exxon haven’t made recent test and inspection documents or other key information available to the public.

Exxon’s January letter notes only that the southern leg had a relatively robust hydrostatic test in 1991, but didn’t discuss the results of that test or any others conducted on the line in the 23 years since. In characterizing the condition of the Texas pipe, Exxon said it “has no reason to suspect that any pipe in this segment was damaged by the failure in Mayflower, Ark.” The company said it would nonetheless conduct a basic leak test with water before putting oil in the line, and then operate Pegasus south at the reduced pressures required by PHMSA.

When InsideClimate News asked for a copy of the restart plan that was sent to PHMSA in January—a document that would contain the details about the precautions being taken by Exxon—Exxon deferred to PHMSA. A PHMSA spokesman said parts of the plan might need to be redacted, so it could only be released to the public through a Freedom of Information Act request.

At PHMSA, however, getting documents through the Freedom of Information Act is typically a months-long process. InsideClimate News has uncompleted Pegasus-related FOIAs that date back to last June.

“The fact that anything related to repairs or tests would have to be FOIA’d is pretty outrageous,” said Steven Da Silva of the Safe Community Alliance, a Texas group that has been highlighting the risks posed by the Pegasus and other pipelines. “Before there’s any forward progress on the discussion to reopen it, the public needs to know what exactly is the condition [of] the pipeline.”

Exxon contends that the southern section of the Pegasus is largely unrelated to the Mayflower spill and should be allowed to reopen. The company has argued that the segment, which crosses Texas from Corsicana to Nederland, does not pose a risk because it was built from pipe made by a different company using a less problematic fusing method than the pipe on the northern segment.

The northern portion of the Pegasus—including where the pipe broke—was constructed in 1947 and 1948, using low frequency electric resistance welded (LF-ERW) pipe that’s known to be more prone to rupture because it often contains dangerous manufacturing defects as well as brittleness around the lengthwise seams.

In contrast, most of the pipeline’s southern leg—more than 80 percent of it—was built in 1951 from pipe that was fused using a different method called electric flash-weld (EFW). About 30 miles of the line was built using the same kind of pipe in 1954, and about 10 miles of pipe is much newer.

Industry research and failure studies have shown that EFW pipe is high on the list of problem pipe and has vulnerabilities that are similar to those at the heart of the Arkansas spill. PHMSA highlighted the troubled record of EFW pipe, calling it “susceptible to seam failure, even if to a lesser extent than low frequency ERW pipe.”

In a fact sheet Exxon gave to an Arkansas water district, the company reiterated the differences between the Pegasus sections, but made no mention of the similar seam threats. According to the handout, Exxon plans to inspect the southern leg by sending two types of sensor-laden smart pigs through the line—something best accomplished once the line is operational—and then share the results with PHMSA “at a later date.”

Exxon intends to do those tests after the restart, but it’s unclear when those tests will be completed and how effective they will be at finding the cracks and other problems that could emerge on the Pegasus. Two different kinds of internal inspection devices missed the defect that caused the pipe failure in Mayflower.

Before getting approval for the Texas leg restart, Exxon should have to conduct a hydrotest or some other testing on the southern part “to show that the flash welds are holding,” said Weimer of the Pipeline Safety Trust. “From what I know, they haven’t done any of those things.” Sufficiently robust hydrotests—or hydrostatic pressure tests—are meant to test the strength of the pipe and to force dangerous cracks to fail with water instead of oil. They are expensive and disruptive if done while the line is in service, but they are also considered the most reliable way to detect and eliminate perilous cracks on problematic pipelines.

For Lawrence and other residents who live along the pipeline’s path, the restart represents a grave and unnecessary risk to Texas neighborhoods, waterways and drinking water supplies. The southern leg of the Pegasus, like many pipelines, crosses farms, backyards, rivers and reservoirs, but it is also one of the lines that carries diluted Canadian dilbit, a tar-like crude that’s difficult to remove from waterways once spilled.

“We’re under drought conditions in Texas. Our water is very precious,” said Lawrence, whose home nestles up to the 45,000-acre Richland-Chambers Reservoir, one of the state’s largest. “Why we’re endangering a major water source with an antiquated pipeline—I can’t even understand it.”

Those concerns have intensified since November, when PHMSA released a report that was highly critical of the way Exxon has managed the risks inherent in the kind of pipe used in the Pegasus.

PHMSA’s bluntly worded report proposed fining Exxon $2.66 million, ordered the company to overhaul the way it manages pipeline risks, and accused the company of delaying a crucial inspection for the Pegasus, putting off urgent repairs, masking pipeline threats with skewed risk data and overlooking its own evidence that the Pegasus was prone to seam failures.

Exxon has denied those allegations, and the company’s appeal will be heard by a PHMSA judge in June.

In the meantime, Exxon is in the position of being able to start up the southern segment. 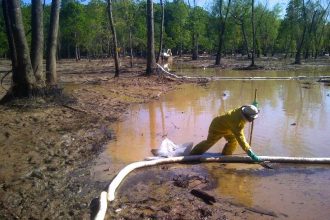