Every spring, California farmers forgo sleep to patrol their fields for signs of frost. Faced with the prospect of losing an entire season’s harvest to severe frost, growers spend millions of dollars a year on heaters, wind machines, sprinklers and even helicopters, to keep cold air at bay.

But a scientist whose groundbreaking research linked frost damage to plant-dwelling bacteria thinks there’s a better way to fight frost. And it doesn’t require spending a fortune on equipment that consumes copious quantities of water and fossil fuels.

Steven Lindow, a plant pathologist at the University of California, Berkeley, showed more than 40 years ago that frost-sensitive agricultural crops harbor bacteria called Pseudomonas syringae that cause ice to form at above-normal freezing temperatures. The bacteria are so adept at making ice that they’re routinely added to snow machines at ski resorts.

Despite battles with anti-GMO activists who derailed his early work, Lindow has  continued to refine his approach ever since. A central focus involves exploiting the science of microbial ecology to enlist beneficial bacteria and other tools to displace ice-promoting strains. Creating conditions unfavorable to harmful strains could reduce dependence on fuel-hungry equipment and conserve water during dry years, which will become more common as the world warms.

Plants are about 90 percent water, and sustain frost damage when ice crystals form between cells and pierce their membranes. In the absence of substances that make ice, they can “super cool,” or remain liquid at sub-freezing temperatures, Lindow said, contrary to the conventional wisdom that water always freezes at 32 degrees Fahrenheit.

“And it turns out that bacteria are by far the most important determinants of how cold plants will get before they will start to freeze and get damaged,” he said.

Lindow’s early research showed that plants could avoid frost injury when they weren’t colonized by P. syringae bacteria, which cause frost damage in many valuable agricultural crops.

After homing in on a protein responsible for the bacteria’s ice-making proclivity, Lindow figured out how to block it by deleting the gene that encodes the protein.

Lindow’s “ice minus” mutant bacteria—viewed by scientists as a landmark scientific achievement—triggered protests from consumers wary of genetically modified organisms and legal challenges that delayed testing for four years. He finally won approval to test his engineered bacteria in strawberries and potatoes in the late 1980s, after spending about $100,000 to meet the Environmental Protection Agency’s regulatory requirements.

The mutant bacteria proved safe and effective. But vandals destroyed most of the plants.

Lindow’s ice-minus bacteria were never commercialized. No company wanted to assume the costs of developing and testing a product for regulatory scrutiny only to face public backlash.

“Nobody wants genetically engineered organisms,” Lindow said, with the resigned laugh of a battle-weary veteran of the GMO wars.

But Lindow had discovered naturally occurring strains that also worked against the ice-promoting bacteria.

Those naturally occurring, benign Pseudomonas strains left no room for harmful species to grow when applied to plants as sprays. One strain reached the market, but was sold not to prevent frost but for its ability to suppress fire blight, a devastating bacterial disease in apple and pear trees. That’s been disappointing, Lindow said, because the strain so effectively controls P. syringae, one of the most common, ice-producing bacteria.

Such setbacks have not deterred Lindow’s research on combating frost by managing microbial communities.

Instead of focusing on just the frost-vulnerable plant, though, Lindow has increasingly looked at the microbial ecology of the agricultural system as a whole. That means figuring out where ice-promoting bacteria come from, how they get to the plant and, crucially, how to disrupt the microbe’s colonization process.

He recently finished a multiyear trial to prevent frost by managing microbial communities on cover crops planted between vineyard rows to fertilize soil, manage weeds and curtail erosion, among other environmental benefits. His team worked with vintners in Mendocino and Lake counties, where about 700 growers farm more than 28,000 vineyard acres.

“We’ve been modifying the local environment by removing cover crops in different ways,” Lindow said. “Depending on the situation, you can have a huge impact on the microbiology of the grapevine, especially early in the spring when frost is the biggest issue, by making these other sources of bacteria scarce.”­

Just a handful of bacterial species promote ice, and they all live on the leaves of plants. Plants are most vulnerable to frost when ice-forming bacteria settle on nascent growth. Although soil is teeming with bacteria, the plant-colonizing variety mostly emigrate from adjacent plants, Lindow said.

Concentrations of airborne bacteria are far higher when green plants are nearby than when they’re not. The number of bacteria coming from plants, he said, “is much more dramatic than I would have ever guessed.”

On farms, those bacteria are coming from cover crops. “People would really like to have cover crops for soil health and erosion control,” Lindow said. “But we recognize that they are major contributors to the freezing temperature of those plants.”

Lindow wanted to make sure growers were aware of trade-offs. Cover crops, he found, support high populations of ice-promoting bacteria during the winter. He reasoned that removing the vegetation could thwart the harmful bacteria, and partnered with Glenn McGourty, emeritus viticulture and plant science advisor for Lake and Mendocino counties, to work with vintners.

They experimented with trying to get the beneficial A506 bacteria to grow first on the cover crops and then spread into the vines, said McGourty. “It colonized some cover crops better than others.”

But it turns out that grapes don’t seem to support high populations of bacteria like other agricultural crops do, so it was unlikely that the good bacteria would get established anyway. Simply clearing out cover crops seemed to be the best way to prevent frost, said McGourty.

The results of the field trials have not yet been published in a peer-reviewed journal. But they suggest that removing vegetation between grapevines, either by mowing, enlisting sheep or spraying herbicides, lowers the temperature at which vines freeze, which can be enough to help them survive an otherwise punishing frost.

Since there wasn’t any frost when they ran the field trails, Lindow took grapevine samples to his lab to assess their susceptibility. The tests showed that the plants should have been able to withstand temperatures about 3 to 4 degrees colder when grown without cover crops compared to those with vegetation.

Because cover crops offer so many environmental benefits, Lindow wondered whether some species harbored more ice-making bacteria than others.

Some pea species and legumes, which enrich soil by fixing nitrogen, appear to harbor much lower populations of the harmful bacteria than grass species, he said. There can be many millions of bacteria on a single blade of grass.

“The results did seem to suggest that in frost-prone areas it would be wise to consider using cover crop species that tend to be poor sources of ice-nucleating bacteria,” Lindow said.

Over the past few years, Lindow and McGourty have also tried to kill ice-promoting bacteria by spraying grapevines with copper, one of the most commonly used pesticides in organic agriculture.

McGourty expects some vintners in Mendocino County will treat their vines with copper this season because there’s not much water in the Russian River. “And we’re really concerned about having enough for frost protection,” he said.

Growers in the county’s Russian River region share water rights with the state’s endangered coho salmon and steelhead. “We have to maintain a certain level of flow in the river in order to keep the fish habitat healthy, and for urban use too,” McGourty said. “We’re looking at a difficult season.”

Spraying copper has downsides, though. It takes several days for a dead microbe’s proteins to decompose and lose their ability to make ice. So copper must be applied at least a week before a cold snap. And only tissues sprayed with copper are protected, so the rapidly growing seedlings and flowers that are most vulnerable to frost require repeated applications.

“You’d have to go out there every few days and spray, which makes it impractical,” Lindow said. “That’s why the competitive bacteria are so attractive. They grow along with the plant.”

Pitting beneficial microbes against harmful microbes takes advantage of an ecological process that happens naturally. Plants enter the world as shoots or from seeds mostly devoid of bacteria. In healthy plants, millions of bacteria colonize the surface of their leaves and protect their hosts against pathogens. Monocultures are likely to prevent the normal establishment of beneficial microflora, making them susceptible to harmful organisms.

Lindow has spent most of his career experimenting with ways to change the microbiology of the plant to reduce the abundance of ice-catalyzing microbes.

The A506 Pseudomonas strain that Lindow developed years ago was an early example of boosting beneficial microbe numbers on plants before the bad variety can get a foothold. His most recent grapevine trials were supported by a grant targeting cover crops, rather than the grapevines themselves.

For McGourty, manipulating microbial ecology is a much better alternative than using copper or antibiotics.

“We really don’t want to be spraying antibiotics in the environment. It’s just not a good idea because you get resistance to all sorts of stuff,” McGourty said.

“What’s going on in the microflora of plants is an emerging area, and I think a pretty exciting one,” he added. “If we could manipulate who shows up at the party, we could protect plants from disease and from freezing.” 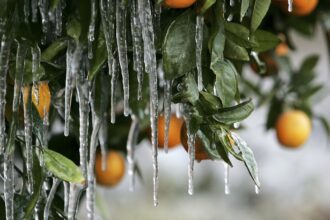 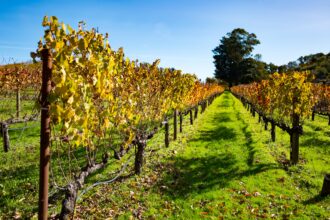 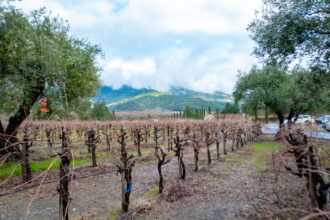