In central Nevada, on the edges of the small town of Eureka, farm fields unfold for miles between the Sulphur Spring Range and Diamond Mountains.

This is Diamond Valley, a high-desert basin with 26,000 acres of irrigated agriculture—mostly hayfields—that relies heavily on groundwater pumped up to the surface to grow crops.

A slice of that acreage is owned by Marty Plaskett, who’s spent his entire life farming this land. On a hot summer morning in early September, Plaskett stood next to an irrigation pivot, a large rotating sprinkler system that was watering his green alfalfa field.

In a light blue checkered shirt and gray trucker hat, Plaskett smiled beneath his mustache as he described some of the innovations in irrigation.

“This water here is spraying mainly in the crop canopy so it’s spraying directly to the ground,” said Plaskett, noting how the low-elevation sprinklers reduce his water use—and waste.

For years, Plaskett used elevated sprinklers that sprayed more plants at once. Sometimes colorful rainbows would show up in the mist—a sight he used to enjoy.

“Now, it makes me sick to my stomach,” said Plaskett, shaking his head. “Because any water that’s leaving by evaporation is going up in the air. It’s the worst thing to see water drifting anymore.”

To Plaskett, any groundwater being pulled to the surface just to evaporate is wasted. And this valley can’t afford to waste any water.

Since the 1960s, state officials had let farmers over-pump the basin-fill aquifer in Diamond Valley, which is mainly recharged by winter storms. Back then, the state appropriated irrigation groundwater rights totaling about 126,000 acre-feet. One acre-foot is the amount of water that fills an acre of land to a depth of 1 foot.

Decades later, however, it was discovered the amount of water available in the valley each year is only 30,000 acre feet.

As a result, for more than half a century, groundwater levels have dropped by an average of 2 feet every year.

“Your land value is zero, you have no livelihood, see you later. So that wasn’t an option for us,” Plaskett said.

Few things are more valuable to a farmer in the West than water. When there’s not enough to go around, figuring out whose use matters the most often leads to heated arguments.

Faced with the threat of some farmers losing their access to water entirely while others didn’t feel the scarcity at all, farmers got together in an attempt to shoulder the burden together.

They were able to do that because in 2015 the state declared Diamond Valley a critical management area—Nevada’s only basin with that designation. They had 10 years to put together a groundwater management plan.

If they didn’t succeed, the state could turn off at least half of the farmers’ wells to ensure the aquifer didn’t run completely dry. The oldest rights would be protected; the newer ones were vulnerable. The same legal foundation governs how water is managed across most of the Western U.S.

“We’re taking water out much quicker than it’s being replenished by Mother Nature,” Tibbitts said. “So, that becomes the big issue here is it’s something that we can’t continue on that path forever.”

So, Tibbitts helped develop a plan that could fit the needs of water users in Diamond Valley while addressing the need for cutbacks. The process, he said, wasn’t easy. Many meetings ran long into the night, and often grew heated. Tensions formed between farmers and ranchers in the valley.

“There are some that are fully senior water rights holders that do not support the plan, and it did drive a wedge in some of those personal relationships,” Tibbitts said.

In 2018, after years of negotiations, a groundwater management plan was approved by a majority of the valley’s water users, with a mix of senior and junior water rights, and later green-lit by the state.

Tibbitts said many irrigators in Diamond Valley own both junior and senior rights, and 64 percent of those with the latter signed onto the plan. The new system required all irrigators to reduce their use, spreading cuts over a 35-year period. By year 5 of the plan, farmers and ranchers, as a whole, have to reduce their groundwater pumping by 15 percent. By year 10, they’ll have to cut back pumping by 30 percent.

That’s a drastic change from how most water law functions in the West, according to Philip Womble with the Woods Institute for the Environment at Stanford University.

“The prevailing system for allocating water in the western United States is known as prior appropriation,” Womble said. “And this is a priority-based system where older, more senior water rights get their entire water allocation before newer, more junior water users get any water.

“(Diamond Valley) is the only place where a groundwater system that is only implementing that priority-based water-rights system has transitioned to a different allocation scheme that shares shortage.”

But not everyone is in favor of sharing shortages, especially those farmers with senior rights. They sued to keep the groundwater plan from moving forward. One plaintiff was Sadler Ranch, a cattle operation with some of the oldest water rights in the region.

Ranch manager Levi Shoda said those rights shouldn’t be messed with. He’s not against a groundwater management system. But he sees the approved plan as a loss—not only in the value of the ranch, but also in the way of doing things.

“This basically overturns 155 years of Nevada water law that people have set themselves up economically,” Rigdon said. “They’ve made investments on the basis of this principle of prior appropriation.”

But those farmers facing a complete shutdown of their pumping as the aquifer declined said the plan is a reasonable ask for shared sacrifice. Reno-based attorney Debbie Leonard represents Plaskett and other farmers backing the plan, which she called a creative solution to an unsustainable priority-based system.

“It encourages conservation in a way that prior appropriation never would do,” Leonard said. “Prior appropriation has the exact opposite—it has no incentive to conserve, because then you lose your water rights and nobody wants to do that.”

Despite legal challenges from Sadler Ranch and two others, the Nevada Supreme Court upheld the contested plan in a 4-3 ruling this June. The ranch’s request for a rehearing was denied late this summer. Without any more legal barriers, the new plan is on track to be implemented next irrigation season, starting in the spring of 2023.

“We recognize that our opinion will significantly affect water management in Nevada,” wrote Associate Chief Justice James Hardesty in the court’s majority decision. “We are of the belief, however, that—given the air nature of this state—it is particularly important that we effectuate the plain meaning of a statute that encourages the sustainable use of water. The GMP [groundwater management plan] here is a community-based solution to the long-term water shortages that befall Diamond Valley.”

According to Womble, Diamond Valley is one of many overdrafted groundwater systems in the West. This, he said, is why he expects water managers and policymakers elsewhere to look at this unique plan as an example of adapting to shrinking aquifers.

Back on farmer Marty Plaskett’s hay operation, he said he knows there’s no guarantee that this plan will work, but they had to try something to protect their futures. Even if it means everyone is getting less water.

“It’s just the need to have the long-term vision,” Plaskett said. “It’s not about me, it’s about our kids or whoever comes next.”

He added that this plan is unique and might not apply in other regions of the west dealing with water issues. In other words, the ripple effects coming from Diamond Valley may be small—at least, for now.

This story is part of ongoing coverage of water in the West, produced by the Mountain West News Bureau, distributed by KUNC, and supported by the Walton Family Foundation. 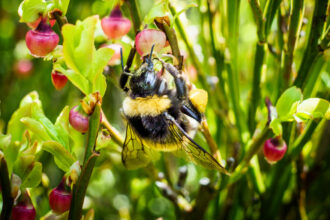 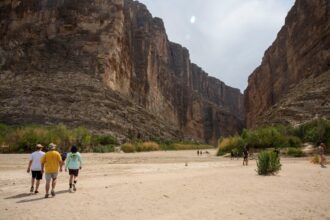