If the Trump administration intends to strangle the flow of climate change information produced by the federal bureaucracy, it will be no small task.

The government apparatus of climate policy involves dozens of agencies and offices, as this chart shows, and they spend billions of dollars a year. Their public activities number in the hundreds, from rules and scientific reports to research programs, webinars and internships. Thousands of employees, grant recipients and contractors are engaged in federal climate science, policy and communications.

To bring all this under control, to satisfy Trump’s apparent desire to stymie programs that run counter to his policies, could also require reining in forces outside the bureaucracy. That could include trade associations, universities, citizens’ groups and state and local governments who work closely with federal counterparts as advisers, partners in regulation, or even as lobbyists for special interests.

Throughout this realm, nerves are on edge in the early days of the administration. The incoming Trump team shows signs of launching a broad campaign of information control, which some say may violate federal standards on scientific integrity or other rules.

Like an exterminator spraying a broad-spectrum pesticide, the administration seems intent on eradicating activities that offend the fossil fuel industry and its allies. Its loyalists are seeded throughout the Trump transition teams and are among the new president’s cabinet nominees, although most remain unconfirmed. Some of the position papers and directives they are wielding speak of abolishing whole programs or radically reorienting their purposes to suit Trump’s pro-fossil-fuel, anti-regulatory agenda.

Nowhere has this been more vivid than at the Environmental Protection Agency, where Trump officials have clamped down hard on sharing information.

“It’s not unusual for an administration to take over press releases and official statements but this goes far beyond what we’ve ever seen before” in the Ronald Reagan, George W. Bush, Bill Clinton and Barack Obama administrations, Jeff Ruch, executive director of Public Employees for Environmental Responsibility, told InsideClimate News. “This includes communications that are part of the normal course of doing business, such as scientists slated to give presentations at conferences.”

If some agencies have escaped a clampdown so far, nobody knows how long that will last. As of Wednesday, it was still possible to subscribe to newsletters from the National Oceanic and Atmospheric Administration and a steady stream of climate information is still pouring out of the Energy Department’s information branch.

Here are just a few of the actions taken so far by the incoming administration:

The Environmental Protection Agency froze its grants and contracts, and shut down public communications. According to the Huffington Post, which broke the story, it’s unclear if the freeze on grants for programs are temporary or indefinite. It’s also unclear if the freeze applies to all of its millions of dollars in ongoing grants, or just future ones.

There have been no new posts on the EPA’s main Facebook and Twitter accounts since Trump’s inauguration. Nor has the agency posted any news announcements. There have been no updates to web pages such as the one where it publishes formal letters reviewing environmental impact statements from other government offices.

Reuters reported Wednesday that the Trump administration has ordered the EPA to remove its climate change website. Pages there describe a broad range of climate science and policies, but also publish and archive important data on emissions that are required by law to be collected from polluting industries and reported to the public. InsideEPA later reported the website would not immediately be taken down.

According to a report by BuzzFeed News on Monday, employees at the U.S. Department of Agriculture’s main research arm were prohibited from publishing tweets, news releases, photos and scientific fact sheets until further notice. The rule change was announced in a department-wide email by the USDA Agricultural Research Service’s chief of staff.

On Tuesday night, the USDA rescinded the rule after widespread media coverage. The ARS is the primary in-house research agency at the USDA. It employs 2,000 scientists and 6,000 other staff who are working on 750 research projects, many touching on climate or environmental matters, and has a budget of $1.1 billion.

The State Department this week quietly removed various climate-related websites, ThinkProgress reported. The deleted pages include information about the agency’s own Climate Action Report, and the nation’s contribution to a global fund for helping developing nations prepare and respond to climate change.

The Centers for Disease Control canceled a climate and health summit scheduled for mid-February, ClimateWire reported on Monday. The conference was to have featured former Vice President Al Gore speaking to about 200 scientists and officials from government, academia, hospitals and the healthcare industry about the intersection of climate change and public health.

Dr. Georges Benjamin, executive director of the American Public Health Association, who was also supposed to speak, told InsideClimate News that he heard about a month ago the conference was potentially going to be canceled. He called the decision an example of “self-censorship.”

Howard Frumkin, who directed the CDC’s National Center for Environmental Health from 2005-10, called the cancellation an autonomous decision by the CDC, not one imposed by the Trump administration—“an act of self-whacking.”

The National Park Service’s main Twitter account last Friday retweeted a pair of photos comparing the size of inauguration day crowds for Barack Obama in 2009 to Donald Trump’s in 2017. The account also retweeted posts about the disappearance of climate change pages from the new White House website. The Trump administration then ordered the entire Department of the Interior (which includes the NPS) to shut down its Twitter activity and review how such tweets were posted. Over the weekend, the NPS deleted the controversial retweets and apologized for the “mistaken RTs.”

With resumption of Twitter posts came signs of defiance. Someone at Badlands National Park, where Teddy Roosevelt spent his formative years, repeatedly tweeted facts about the science of climate change on Tuesday. The Twitter account gained unusual attention before the tweets vanished. 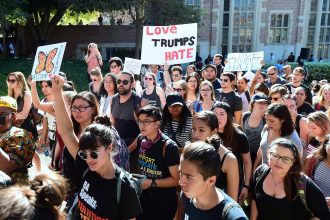