Stanford University rejected a bid backed by students, faculty and alumni to divest the school’s $22.2 billion endowment from holdings in oil and gas companies, school administrators announced on Monday.

The decision drew immediate scorn from the same activists who hailed the school as a leader in the divestment movement when it announced it would purge its portfolio of coal investments in 2014—and successfully did so in 2015. About 20 U.S. universities—all with substantially smaller endowments than Stanford—have fully divested or pledged to do so, including the University of Hawaii system and Syracuse University.

“We feel hurt and disappointed that Stanford’s administration has chosen to remain invested in climate injustice and in the destruction of our future,” student activist Michael Penuelas said.

Penuelas, a masters student, said that when the school first decided to divest from coal and consider full divestment back in 2014, “we were absolutely at the forefront of this movement.” He said Stanford’s divestment from coal likely helped encourage other schools to follow suit and build the larger conversation about divesting. (Last year, California lawmakers passed a bill mandating the state’s two largest public pension funds, worth nearly $500 billion combined, divest from coal.)

“Since then, other institutions have taken on that mantle of leadership,” Penuelas said. “Stanford is rapidly falling behind on the curb.” Penuelas said he and other members of the student group Fossil Free Stanford will continue to keep fighting for full divestment.

Climate activist Bill McKibben, founder of the green group 350.org, is among those who praised Stanford in 2014 and was angered by this decision. “It’s bizarre [Stanford’s] administrators are stuck in the old-school mindset about fossil fuels when all they have to do is look down the street to Tesla and see the future taking shape,” McKibben wrote in an email. “Or look at the fire-scarred hills of their state to see what four years of record drought produced. As they say to students all the time, ‘This will show up on your transcript.'”

Stanford’s rejection of full divestment comes on the heels of several divestment announcements on college campuses worldwide. On Monday, the University of Ottawa became the first university in Canada to agree to shift all its holdings away from fossil fuel companies. In recent weeks, University of Massachusetts President Marty Meehan said he would vote for divestment at an upcoming Board of Trustees’ meeting following student protests.

Also this month, Yale University became the first Ivy League school to at least partially divest from fossil fuels. Yale’s chief investment officer David Swensen announced in a letter sent on April 12 to the Yale community that the school had divested less than $10 million of its $25.6 billion endowment from three unnamed fossil fuel producers. The school did not respond to a request concerning how much of Yale’s investments remain tied up in the industry.

Protests continue at several other schools, where students have held one-day and multi-day campus sit-ins calling on school officials to fully divest. Some of these efforts have resulted in meetings with school administrators, such as at Columbia University and New York University. This week, protests kicked off at Vassar College and the University of Montana.

Stanford students held a five-day sit-in on campus last November, which earned them a meeting with the university president, John Hennessy. At the time, the schools Advisory Panel on Investment Responsibility and Licensing (APIRL) had been considering whether Stanford should divest beyond coal for nearly a year and a half. After APIRL issued its recommendations, another committee reviewed the issue and made recommendations and Stanford’s Board of Trustees came to two final divestment decisions.

First, officials decided the school should not invest in companies involved with oil sands production, because that form of fossil fuel extraction is water-intensive and releases large amounts of carbon. Stanford has no current holdings in oil sands companies and agreed to make no such investments in the future, according to university spokesperson Lisa Lapin.

School officials said they needed to determine “whether the social injury caused by the fossil fuel industry outweighs the social benefits it provides,” to decide on full fossil fuel divestment. Rather than come to a decision, APIRL determined it could not make this evaluation and recommended against divestment. The Board of Trustees agreed.

In their public statement, the Board of Trustees said they avidly support the world’s transition away from fossil fuels. Despite this, they recognize oil and gas remains “integral components of the global economy, essential to the daily lives of billions of people in both developed and emerging economies,” and that some fossil fuel companies are actually working to “advance alternative energy sources.” Therefore, they concluded, “the complexity of this picture does not allow us to conclude that the conditions for divestment outlined in the Statement on Investment Responsibility have been met.”

The Stanford administration also shared on Monday plans to launch a new climate task force, promising that its members would reflect a cross-section of the school’s community.

Activists including Penuelas said these efforts by Stanford to support climate action were undermined by the school’s decision to keep investing in the companies exacerbating global warming and energy alternatives.

“The wave of escalation around the country in the last couple of weeks and continuing forward in the next couple of weeks is…important to look at in terms of where the movement is,” Penuelas said. “This is our future we are talking about. For a lot of students this is extremely personal.” 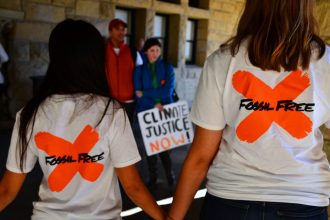 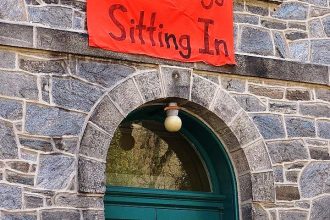