1999: Enbridge begins carrying diluted bitumen from Alberta on Pipeline 6B, part of the company’s Lakehead system.

2008: An internal Enbridge inspection identifies 140 corrosion defects on 6B.

2009: Another internal Enbridge inspection identifies 250 more corrosion defects on 6B.

2009: Enbridge tells PHMSA it will reduce pumping pressure along 6B while deciding whether to repair or replace the line.

July 2010: Enbridge in midst of dig-and-repair program on 6B in Marshall area and elsewhere.

July 15, 2010: Enbridge seeks permission from PHMSA to continue operating 6B at reduced pressure for another 2 ½ years.

July 15, 2010: Enbridge official tells a congressional subcommittee the company’s response time to a leak can be “almost instantaneous.”

4 a.m.: Controllers in Edmonton try to restart 6B as scheduled; alarms sound.

Close to 10 a.m.: Enbridge evacuates John LaForge and his family from their home on Talmadge Creek.

1:33 p.m.: Enbridge reports spill of 819,000 gallons of oil to the federal authorities at the National Response Center in Washington, D.C.

July 27, 2010: EPA issues two cleanup deadlines to Enbridge; wetlands near the rupture site are to be cleaned by Aug. 27; oil from creek, river and shorelines are to be removed by Sept. 27.

July 29, 2010: Work crews keep oil out of Lake Michigan by halting flow at Morrow Lake, east of Kalamazoo; spill confined to about 38 miles of waterway.

Aug. 2, 2010: At the EPA’s first meeting for residents, state and federal government authorities promise the river will be restored.

Sept. 15, 2010: Deb Miller and five other Calhoun County residents travel to Washington, D.C., to testify before a U.S. House Transportation and Infrastructure Committee oversight hearing on the spill.

December 2010: Enbridge announces that 766,288 gallons of oil recovered from the spill are being recycled back into 6B.

Spring 2011: Crews again fan across river, using poles to map the footprint of the submerged oil.

April 2011: The LaForges settle with Enbridge on the sale of the family home on Talmadge Creek.

July 2011: The LaForges move into their new house on the outskirts of Marshall.

April 18, 2012: Calhoun County Health Department opens a mile of the contaminated section of the river to the public.

June 21, 2012: Jim Rutherford, Calhoun County’s public health director, opens about 34 miles of the Kalamazoo River to the public. A small stretch at the delta of Morrow Lake remains closed while cleanup continues. Crews are now mapping the river again, to estimate the amount of oil remaining. 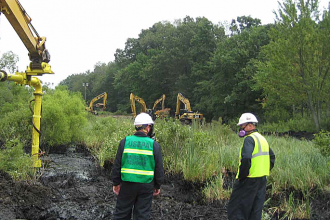