Along the northern edge of Alaska, millions of square miles of land are home to countless animal species—hundreds of thousands of caribou, scores of threatened bird species, polar bears and more.

This isn’t the Arctic National Wildlife Refuge, although the same is true there. It’s the National Petroleum Reserve-Alaska, a few hundred miles west of the refuge, and some of its most ecologically sensitive lands may soon be open for business to the oil industry.

Since early in the Trump administration, the U.S. Interior Department has sought to open new areas of the NPR-A to drilling, including the area around Teshekpuk Lake, a region that has long been considered too ecologically sensitive for drilling.

“Teshekpuk Lake is the feeding and calving grounds of our caribou, geese, fish we depend on for survival,” said Martha Itta, the tribal administrator of the Native Village of Nuiqsut, which is adjacent to the reserve. “Drilling in the Teshekpuk area would be devastating to our people. We will no longer be able to hunt being surrounded by industry. We will go hungry.”

Earlier this year, the Trump administration released a plan for drilling in part of the Alaskan Arctic that provided a range of options. A few of them expanded the area allowed for drilling, but only slightly. One, called Alternative D, opened up almost all of the region—including Teshekpuk Lake.

On Thursday, the Bureau of Land Management released its final environmental review and announced which option it preferred: Alternative D, plus 300,000 acres. The plan would make a total of roughly 6.8 million acres of previously protected land available for drilling.

“They have created a whole new alternative that actually opens more area to oil and gas leasing and exploration,” said Rebecca Noblin, a senior attorney for Earthjustice who specializes in the region. “It’s surprising that they would consider an alternative that wasn’t considered in the draft and that the public didn’t get a chance to comment on.”

The new plan contains features of the earlier options that had been presented in the draft review, but has some “minor variations resulting from stakeholder consultation,” according to Lesli Ellis-Wouters, the spokesperson for the Bureau of Land Management in Alaska. “The alternatives analyzed in the Final IAP/EIS allow for an environmentally responsible approach to leasing and development, respect traditional uses of the land, and maintain access to subsistence resources,” she said.

Now that the plan has been published, the Interior Department must wait at least 30 days before taking the next step—the publication of what’s called the Record of Decision. After that, the department can schedule a lease sale.

The publication of the review represents the next step in the Trump administration’s plans to open up more of the Arctic to drilling. In the Arctic Refuge, progress has been stymied by low oil prices and a lack of clarity about whether companies are interested in investing there. But in the NPR-A, the administration has been steadily plodding ahead, buoyed by reports of vast oil reserves in the area and existing infrastructure at Conoco-Phillips’ nearby projects.

“President Trump has committed to expand access to our Nation’s great energy potential,” said Secretary David Bernhardt in a statement Thursday. “Today’s action is one more significant step in the process of delivering on his promise.”

Teshekpuk Lake is a prime piece of real-estate.The area provides critical habitat for tens of thousands of birds—many of them threatened with extinction—as well as a 40,000-head caribou herd. But below the surface of the picturesque lake and wetlands petroleum, companies expect to find vast stores of oil.

“This plan turns its back on unique and spectacular Arctic wildlife species and sells their key habitat out to the oil industry,” said Nicole Whittington-Evans, the Alaska program director for Defenders of Wildlife. “It gives away critical habitat for imperiled polar bears and vital habitat for caribou and migratory birds to oil companies that will only exacerbate the climate crisis by expanding into a fragile frontier area with new drilling. It is bad for the Western Arctic and bad for the planet.”

When the federal government wants to make a plan for drilling in an area—as opposed to planning for one specific project—it works up a science-based document called an Integrated Activity Plan. The plans can span hundreds of pages, and are the result of the work of scores of scientists, policymakers and local stakeholders. In 2013, when the Obama administration released the plan for drilling in Alaska’s national petroleum reserve, it was the result of three years of painstaking work.

“The EIS and attachments and appendices piled up on my desk probably 12 inches,” said David Hayes, who oversaw the effort as Deputy Secretary of the Interior Department.

In 2013, he said, after the publication of the plan, the oil industry and Alaska congressional delegations approached the agency, asking officials there to open up more of the area around Teshekpuk Lake. “We held firm,” Hayes said. “There was no basis for impugning the science, which demonstrated the incredible ecological value of the area.”

That process stands in stark contrast to what has happened during the Trump administration.

In public comments and transcripts of public meetings held across Alaska, local Indigenous groups and environmental advocates argued against changing the plan.

But the announcement of the plan was hailed by members of Alaska’s congressional delegation. “As Alaskans work toward economic recovery, having a robust plan to unlock the potential of one of the most promising areas on the North Slope is a powerful tool,” said Sen. Lisa Murkowski in a statement. “NPR-A holds billions of barrels of oil that will ensure the continued operation of the Trans-Alaska Pipeline System and support good jobs for thousands of Alaskans.”

Others worry, however, that in the face of low oil prices and lease sales that have seen acreage selling for far below average, the new plan could result in ecologically irreplaceable land selling for record low prices. In the 14 lease sales held from 1999 to 2018, land in the reserve sold for an average of $47 per acre. In 2019, a record amount of land was sold—more than 11 million acres—but for an average $11 per acre.

Those low prices have been used as a warning by environmental groups and democratic legislators who also want to keep drilling out of the Arctic National Wildlife Refuge. If leases in the NPR-A sell for so little, they warn, they may go for even less in the Refuge, where there is no existing infrastructure and where the sole exploratory well—drilled decades ago—revealed little oil.

In Nuiqsut, a village that is already surrounded by oil drilling, and where locals worry about health impacts they may have already suffered from the industry, the stakes are especially high. “Our cultural heritage, past and present, our food security for generations to come, our health will be lost and affected,” said Itta.

The publication of the plan is not the end of the road. Once the record of decision is published, environmental groups will have the option of suing the administration, which could put the brakes on a lease sale.

“I think there will be a strong legal response to this unlawful attempt to open up the western Arctic,” said Noblin, of Earthjustice.

If a lawsuit successfully stalls a lease sale, the future of Teshekpuk Lake may rest in the hands of the presidential election. 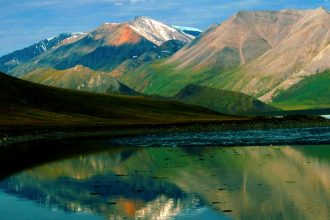 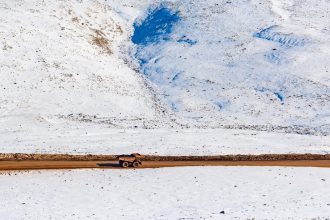 On Baffin Island in the Fragile Canadian Arctic, an Iron Ore Mine Spews Black Carbon 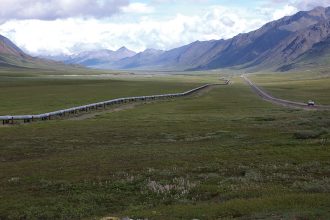