In the last minutes of the legislative session last Saturday before the election recess, the Senate passed a closely watched bill that would bar U.S. airlines from participating in a European Union emissions reduction scheme.

The EU scheme went into effect at the beginning of the year and requires all airlines flying in and out of European airports to slash their emissions or purchase allowances to cover them. All major US airlines are currently taking part, although some other countries have balked. The plan—the first of its kind in the world—could curb emissions by as much as 20 percent by 2020, the EU says.

The Senate vote is the latest twist in a high-profile political saga that has united not just Congressional Democrats and Republicans, but many of the world’s largest economies in political opposition to the EU. But critics say the bill is nothing more than a symbolic hit against the trading scheme, and warn that it could overshadow larger concerns about airline emissions and the work already being done to reduce them.

There’s little disagreement about the need to cut airline emissions, which nearly doubled from 1990 through 2006, according to the International Civil Aviation Organization. All told, international air travel accounts for roughly 3 percent of the world’s greenhouse gas emissions, but that figure is growing steadily as more and more passengers take to the air. Without a reduction effort, airline emissions could rise by as much as 60 percent by 2030, 300 percent by 2050, according to a 2009 study by the Pew Center on Global Climate Change (now C2ES).

The bone of contention, airlines say, is that the European Union isn’t the body that should be dictating the policy.

“It’s an issue, this idea that one country or group of countries can regulate the airlines of the world wherever they are,” said Nancy Young, vice president of environmental affairs for Airlines for America, the lobbying arm for the U.S. airline industry. She said airlines are not opposed to cutting emissions, but the politics of the E.U. program gives them pause.

“Does it really matter who asks you to do the right thing?,” said Martin Wagner, an attorney with Earthjustice. “It is the right thing, and if the international community can’t ask it and the European Union can, the airlines ought to comply.”

The International Civil Aviation Organization, the United Nations body that governs airline policy, has been working on its own emissions reduction plan for years. Critics have said the process has moved too slowly, and delays led the EU, tired of waiting, to approve its own emissions law. The EU policy is designed to be reconsidered, and potentially eliminated, when and if ICAO institutes a better plan.

The EU, though, has faced widespread opposition for leading the way.  A number of countries complain the EU program violates national sovereignty by imposing fees on other countries. China and India have flatly refused to participate in the program. The United States airlines filed a lawsuit last year in the European Court of Justice, but in December the court ruled in favor of the EU.

The latest U.S. move is the Senate bill from Sens. John Thune (R-S.D.) and Claire McCaskill (D-Mo.), which bars U.S. airlines from participating in the EU program. It also puts pressure on the Department of Transportation to work with ICAO to craft an international solution.

Thune said in a statement this weekend that Congress had “sent a strong message to the EU that they cannot unilaterally impose an illegitimate tax on the United States,” before urging the House to pick up his bill. The House passed a previous version by voice vote last fall and is expected to give the thumbs up to the new one.

President Obama is expected to sign the legislation if it passes. Transportation Secretary Ray LaHood called the EU scheme a “lousy, bad” law in a Senate hearing earlier this year.

Some observers, however, are saying that the bill is unnecessary since the administration and the airlines do not need Congressional authority to boycott the EU program.

The EU has refused to back down, despite some news reports saying the union was getting wobbly on the issue. European climate commissioner Connie Hedegaard told Reuters Saturday that the “US needs to change its approach in ICAO and show willingness to actually seal a meaningful global deal that will facilitate action.”

Noncompliance with the law could cost airlines dearly. Under the structure of the trading scheme, airlines that do not comply could eventually see financial penalties of $125 per ton of emissions (estimated to at least $2 billion in the first year across the industry) and could even be blocked from entering European airports.

Plus, Earthjustice’s Wagner added, it sets a dangerous precedent for compliance with international laws.

“It’s a mistake because as a matter of U.S. foreign policy we consistently ask foreign airlines and other operators to comply with our environmental and public welfare laws and here we are telling our citizens not to do the same,” he said.

But, said Jake Schmidt of the Natural Resource Defense Council, it’s easy to forget that amid all of the talk about sovereignty, there’s a bigger issue.

“Lost in all of this is that ICAO has sat on its hands and emissions are predicted to rise if they’re not controlled,” Schmidt said. “There’s a huge opportunity for airlines to clean up their mess and if you look at the fleets, companies are already competing to see who can sell the most efficient aircraft. There are opportunities already sitting on the marketplace.”

Most airlines are expected to be able to meet the initial emissions targets easily, which call for a 3 percent reduction below 2004-2006 levels in the first year. It will allow them to bank or sell excess emissions allowances. In the first year of the program, airlines only have to buy 15 percent of their allowances.

A report by Climate Advisers and the Center for American Progress found that airlines could profit under the scheme in the early years of the program – anywhere from $591 million to $1.45 billion a year.  Profits would drop as the emissions targets rose in subsequent years.

Airlines have said that ticket prices will rise under the program by as much as $6 a ticket and that the entire industry could be facing a multi-billion hit to comply.

Young, the vice president of environmental affairs for Airlines for America, even said that airlines are fully behind the goals of the program and that individual companies are working on their own to reduce emissions, especially in light of rising fuel prices.

Several airlines are experimenting with alternative fuels and the industry is exploring more efficient airplane and engine design. In 2011, ASTM International, a body that determines international industry standards, gave its approval to a 50 percent biodiesel blend for jets.

Innovations outside the airplane could also make a mark. A high-profile air traffic control system, known as NextGen, is aiming to reduce emissions 14 million tons by 2018, according to the Federal Aviation Administration. It works by clearing better routes and eliminating congestion on the runway. That system, being installed by the FAA with the cooperation of airlines, has been beset by delays.

With all of that work already being done, Schmidt said, actions like the Thune/McCaskill bill represent just “sabre-rattling.” Still, he said, he was encouraged that there seemed to be attention on a global solution, even within the language of the legislation.

ICAO has begun moving forward on a system that would focus on setting reduction targets through 2020, then requiring carbon-neutral growth beyond that. The body this summer devised a carbon emission metric that they say lays the path for a full program.

In fact, the end result of the intense political debate about the E.U. plan, Schmidt said, could be an actual international plan that all sides could agree with.

“It’s only in light of the [EU program] that ICAO scrambled to restart its progress,” Schmidt said. “Nobody’s put forward anything yet, but clearly ICAO has restarted that discussion to address this problem.” 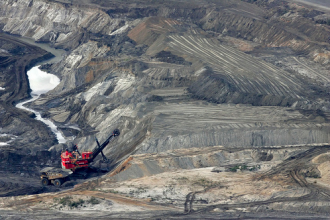 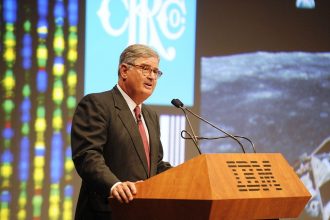