The Rev. Raphael Warnock made climate and environmental justice part of his successful Georgia campaign to win a decisive seat in the U.S. Senate two years ago. He made good on his campaign promises by delivering a major climate vote.

Now, environmentally minded voters have an opportunity to reward Warnock, a Democrat, with a full six-year term in what until 2020 had become a reliably Republican state. But the incumbent will need a lot more than just the green vote in an election season dominated by an economy marked by 8 percent inflation and shaken up by a Supreme Court decision that overturned abortion rights nationally.

FiveThirtyEight poll tracking shows Warnock ahead of Republican Herschel Walker, a former University of Georgia and NFL football star, by about 4 percentage points, as Walker, running as a staunch anti-abortion candidate, denies news reports that he paid for one abortion and offered to pay for a second. The Cook Political Report sees the race between Warnock, the pastor at Ebenezer Baptist Church once led by civil rights icon the Rev. Martin Luther King Jr., and Walker, as a toss-up.

With the Senate evenly divided and several Senate races polling within the margin of error, and Republicans favored to regain control of the House of Representatives, the political stakes could not be higher for President Joe Biden, a Democrat, and his presidency, let alone Biden’s climate and environmental agenda.

“We have seen what just a slim majority in the Senate can do,” said Brionté McCorkle, director of the Georgia Conservation Voters.

Warnock “helped get the Inflation Reduction Act passed by providing a critical vote on that measure,” she said. The law includes an unprecedented $370 billion in federal spending to tackle climate change, much of it through tax credits for developers and producers of clean electricity. It passed 51 to 50 along party lines with Vice President Kamala Harris, in her role as president of the Senate, breaking a tie.

“It was a great step in the right direction, but not enough,” McCorkle said. Warnock, she added, is a leader in the Senate on climate and environmental justice. “He gets it. He’s been organizing on it for a long time.”

Polling by The Atlanta Journal-Constitution, an Inside Climate News partner, finds that climate change does not rank among the top issues for voters in the state this year, but a majority believe the nation needs to do more to address it.

While the economy, abortion and the personal character of the candidates have dominated the race, Warnock and Walker have staked out strikingly different positions on climate and the environment.

Walker, endorsed by former President Donald Trump, has had little to say about climate change or energy policy. But what he has said has left critics scratching their heads, and even some supporters agreeing he doesn’t know much about the issues.

In his primary victory speech in May, Walker claimed the “radical left came in with a bunch of lies to divide us,” including “windmills made airplanes fly, tanks can run on solar, drilling for oil in America cause global warming but drilling for oil from dictators does not.”

In July, Walker bashed the Green New Deal—an idea that took hold in the Democratic Party in 2019 envisioning an all-out, decade-long mobilization aimed at transforming the economy to carbon-free energy with living wage jobs.

“We, in America, have some of the cleanest air and cleanest water of anybody in the world,” Walker said. “So what we do, we gonna put, from the Green New Deal, millions or billions of dollars cleaning our good air up. So all of a sudden, China and India ain’t putting nothing in there, cleaning that situation up. Since we don’t control the air, our good air decided to float over to China’s bad air so when China gets our good air, their bad air got to move. So it moves over to our good air space. Then now we got to clean that back up.”

“They continue to try to fool you that they are helping you out,” Walker said in August, according to the Atlanta Journal-Constitution. “But they’re not. Because a lot of money, it’s going to trees. Don’t we have enough trees around here?”

Scientists say trees are essential to reduce urban heat and store carbon dioxide, a primary driver of climate change. Nationally, research shows, urban tree losses add up to hundreds of thousands of acres and 36.2 million trees per year and a corresponding depletion of all their benefits, including air and water pollution reduction, carbon storage—and cooling.

Tim Echols, a Republican member of the Georgia Public Service Commission, which regulates electricity in the state and sets statewide energy policies, said he doesn’t believe either Warnock nor Walker have a detailed understanding of climate or energy policy.

“They are probably going to be leaning on their own party and follow any kind of party line,” said Echols, who added that he had already voted for Walker and would hope to influence his thinking on energy if elected.

Still, Echols said of the race, “any kind of meaningful conversation about energy has been pushed down the stack because of social and personal issues.”

Warnock has out-raised Walker $87 million to $32 million through Sept. 30, according to Open Secrets campaign finance tracking.

Inside Climate News contacted both candidates’ campaign offices and neither responded.

Heading for a Runoff?

Georgia hadn’t had a Democratic senator since the late Zell Miller retired in 2005. Now it has two, with Warnock and Jon Ossoff, who won a full six-year term two years ago. Warnock is the first Black person to represent Georgia in the Senate; Ossoff, the first Jewish person to do so.

In Georgia, races without a winner receiving more than half the votes go to a runoff, so Warnock and former Sen. Kelly Loeffler, a Republican, faced each other on Jan. 5, 2021, in a special election, with the winner determining which party would control the Senate. Warnock won, 51 to 49 percent.

As part of voter restrictions passed by the Georgia legislature after the 2020 election, a Warnock-Walker runoff now would be four weeks after Nov. 8 instead of nine weeks, as it was after election day in 2020.

And there is a good chance that Warnock and Walker will go to a runoff, said Daniel P. Franklin, an emeritus associate professor of political science at Georgia State University.

“This election is all about turnout,” Franklin said. “In a highly polarized political environment, basically most people have made up their minds.  The main task then is to get your supporters to the polls.”

Despite the 2020 vote that went blue, and changing demographics in the Atlanta area that favor Democrats, Warnock’s re-election has never been a sure thing.

“Coming into the race I would have said that Warnock had a less than 50-50 chance to win re-election,” Franklin said. “But because Walker is such a flawed candidate, I would now say Warnock is a 70-30 favorite. The difference is that many evangelical Christians are serious enough about their faith that they will not vote for someone who encouraged his girlfriend to have an abortion twice. This for many pro-lifers will be a deal killer. But that doesn’t mean they’ll vote Democratic.”

Voters have the option of casting ballots for Libertarian candidate Chase Oliver, a gay man who defended gun rights during an Oct. 16 debate with Warnock, and argued that the government should get out of climate change policy.

Regarding climate, Oliver said, if businesses are left to their own devices, they will “develop the technologies that will power us into the future, not using carbon-based fuels,” though he did not offer any concrete examples of how that would work.

Warnock said during the debate that he is “very focused” on climate and the environment.

“In the church, we call that creation care,” said Warnock, whose Atlanta church has been a leader in a growing movement among American Black churches to embrace environmental justice and activism. “We ought to be kind to the Earth,” he said, “It’s the only place that we have, and we have to make sure that we have a planet to leave for our children.”

Climate solutions are also good for the economy, he said, noting a growing electric vehicle and battery industry in Georgia. “There are so many things that we need to do, and I’m very focused on that work,” he said.

Walker was a no-show at the Oct. 16 debate. And climate change did not come up during a head-to-head debate between Warnock and Walker two days earlier.

Warnock has a 100 percent environmental score from the League of Conservation Voters for 2021, his first full year in the Senate. He earned that score in part by voting for a resolution supporting President Biden’s initial Build Back Better legislation, which did not pass; voting to repeal a roll-back of methane regulations by the Trump administration; voting against a resolution that sought to keep the Keystone XL Pipeline alive after Biden nixed it; and voting to support the Freedom to Vote Act, which Democrats said would have protected free and fair elections.

“I believe that a vote is a kind of prayer for the world that we desire for ourselves and for our children,” Warnock said in the Oct. 16 debate. “I’ve worked hard to create a framework so that we can preserve our democracy. So I will not rest until we pass voting rights.” 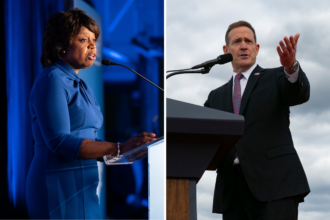 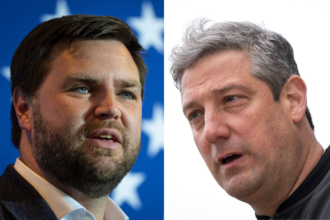 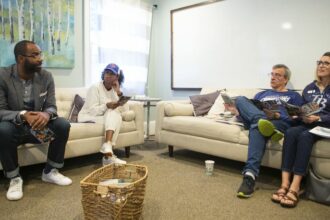 By Meris Lutz, The Atlanta Journal-Constitution