Winter storm Juno is expected to dump as much as 3 feet of snow across parts of New England early this week. Media outlets have already dubbed the storm “a massive blizzard of epic proportions.” Schools closed their doors, grocery stores had their shelves stripped and governors announced travel bans along most of the storm’s path.

But on social media, Juno is being pointed to as the latest evidence that global warming is not happening, or that it’s even a hoax or scam—an assertion that scientists said couldn’t be further from the truth.

“That claim is nonsensical,” said Kevin Trenberth, a climate scientist at the National Center for Atmospheric Research (NCAR) in Boulder, Colo. “Yes, we have always had storms in the winter, but climate change is often the contributing factor that pushes these events over the edge to become record-breaking.”

Here’s why: As the oceans warm due to the burning of fossil fuels, the atmosphere above can hold more moisture, which in turn fuels the creation of the most intense precipitation events. The mid-Atlantic is currently 2 degrees Fahrenheit above normal. In the spring, summer and fall, that translates into more of the most intense rainstorms. In the winter, when that moisture-rich air hits cold temperatures on the continent, heavier snowfall results.

The amount of rain and snow falling in the heaviest precipitation events in the Northeast has jumped 71 percent in the last half-century, according to the 2014 National Climate Assessment. Five of New York City’s 10 largest blizzards have happened in the last 12 years, according to Mark Bove, a research meteorologist at Munich Re America, a reinsurance company. Juno could add another one to the list if the forecasts hold up.

“This week’s blizzard, along with many other extreme precipitation events in 2014, are indicative of the types of events we may see more frequently in a changing climate,” Bove said.

The problem, Trenberth said, is that the annual time frame when these storms can occur, with temperatures just below freezing, is shrinking because of rising global temperatures. So is the duration of the snow’s sticking around between storms. High-altitude snow packs are smaller and melt earlier nowadays, raising the risk of drought and wildfire and threatening the lives and livelihoods of millions of Americans who rely on the snow packs for drinking and agricultural water.

Climate scientists expect this pattern to continue in the coming decades as the world continues to warm. Even as total snowfall declines due to climate change, the number of the most intense blizzards could stay steady or slightly increase through the late 21st century, according to research published in the scientific journal Nature last year. But climbing temperatures mean the snow won’t stay on the ground for long.

Climate deniers‘ strategy of using large winter storms to question global warming is nothing new. Oklahoma senator and climate denier Jim Inhofe’s family built an igloo and named it “Al Gore’s New Home” on the National Mall in 2010 after a winter storm dumped at least 2 feet of snow on Washington, D.C.

Deniers took to social media over the past few days to blast this week’s nor’easter as proof that the world isn’t warming.

Businessman and conservative presidential hopeful Donald Trump tweeted, “Where the hell is global warming when you need it?” on Monday.

“During the summer, environmentalists call it ‘global warming,'” Mitch Behna, editor of the conservative radio station We Are America, wrote on Twitter. “During the winter, they call it ‘climate change.'”

But in recent years, politicians in states affected the worst by winter weather have begun to link climate change to monster snowfall events.

Announcing a state of emergency on Monday, New York Gov. Andrew Cuomo told reporters “there is a pattern of extreme weather that we’ve never seen before,” adding that winter storm Juno is “part of the changing climate.” 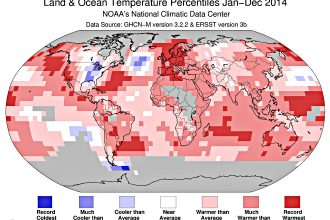 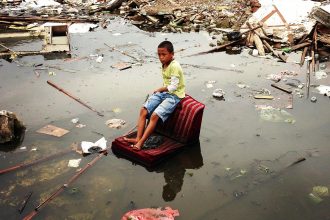 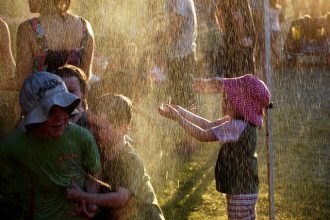