If all goes well, the next oil removal operation on Michigan’s Kalamazoo River will mark the beginning of the end for the cleanup of the largest oil pipeline spill in U.S. history

The spill, which occurred in July 2010, already has cost pipeline operator Enbridge Inc. more than $820 million in cleanup expenses. That figure could top $1 billion by the time the latest operation is carried out.

The goal of the new effort is to dredge three areas of the river where the U.S. Environmental Protection Agency says oil is still accumulating. When the EPA first proposed the idea in October, Enbridge asked the agency to delay its decision until it conducted more scientific studies. But Enbridge agreed to comply after the EPA issued an order on March 14.

The EPA fears that if the oil isn’t removed, it could continue to spread and contaminate parts of the river that are currently clean.

Surveys “show that submerged oil can now be detected throughout the 2 mile long, 700 acre expanse of [Morrow] lake,” the EPA said in a letter that accompanied the order. “By contrast, only 189 acres showed submerged oil impact in Fall 2011. In Spring 2012, the area of impact had progressed to 325 acres.”

The cleanup of the Kalamazoo has been especially challenging because the pipeline that ruptured was carrying diluted bitumen, or dilbit, from Canada’s oil sands region. That’s the same type of oil that the Keystone XL pipeline would carry from Alberta, Canada to the U.S. Gulf Coast if the project if the Obama administration approves the project.

The dilbit that spilled in Michigan contained a mixture of oil-thinning chemicals, which soon evaporated, and heavy bitumen, which gradually sank. Much of the bitumen accumulated in the riverbed, where cleanup techniques used for spills of lighter, conventional oil weren’t effective.

Enbridge is now developing a work plan for the dredging.

“While there are some issues related to the Order that still must be resolved, we are, as we have always been, focused on cooperation with the EPA and other authorities in doing what is best for the river and the environment based on analysis and sound science,” said a statement posted on the company website. Spokesman Larry Springer said Enbridge had no comment beyond that post.

Steve Hamilton, an ecologist at Michigan State University, said the EPA will conduct a new survey in the spring to assess the extent of the submerged oil. Hamilton is part of a scientific committee advising the EPA on the Kalamazoo cleanup. He spoke to InsideClimate News as an independent scientist, not as an agency representative.

Hamilton said dredging is believed to be the “ultimate solution” for the Kalamazoo cleanup.

“If indeed most of the oil is in these hot spots, then dredging should work,” Hamilton said. “On the other hand, if there’s dispersed oil still coming in [from upstream] and accumulating, it’s anybody’s guess what’s going to happen.”

In addition to dredging the riverbed, the order directs Enbridge to clean and maintain sediment traps used to capture oil outside of the hot spots, and to continue gathering scientific data on the river’s recovery.

“U.S. EPA has determined that these cleanup actions are the most consistent with protecting public health and welfare and the environment,” said the letter signed by Ralph Dollhopf, who has been the federal on-scene coordinator since the spill occurred in 2010.

The EPA is working with state and local authorities but it remains the lead agency in the cleanup—an unusual situation that highlights the challenge of the Kalamazoo spill.

Matthew Allen, a spokesman in the EPA’s Montana office, said the agency’s jursidiction typically ends when it determines that the impact of a spill is “no longer an imminent threat to waters of [the] U.S.”

That decision is made based on the presence of a “visible sheen on the water,” he said. “So if we have a sheen on the water of a significant size identified [as] from a pollutant source, then we will stay and clean that up.”

The EPA made the state of Montana the lead agency just two months after an oil pipeline burst near the Yellowstone River in 2011. That spill released 63,000 gallons of crude oil—less than 6 percent of the volume spilled in the Kalamazoo—but it contaminated 70 miles along the Yellowstone River, nearly twice as many river miles as the Kalamazoo spill. Still, the Yellowstone cleanup was easier, Allen said, because the oil that spilled was “significantly lighter” and didn’t sink to the riverbed.

When InsideClimate News contacted Dollhopf and his colleague for comment on the latest efforts to clean up the Kalamazoo, they directed us to coordinate through EPA’s Region 5 Public Affairs Office. In an email, spokesman Joshua Singer said the office would not make the scientists available for questions.

One Cleanup Technique May Have Helped Oil Spread

The EPA’s Kalamazoo order has been in the works since October, when the agency issued a proposed order telling Enbridge to dredge 80 to 100 acres of the riverbed. Enbridge resisted, questioning the EPA’s assertion that the oil was moving along the river.

In particular, the company criticized the poling technique used to assess the extent of submerged oil. During the poling process—a technique that Enbridge proposed and developed shortly after the spill—scientists prod the bottom of the river with wooden poles to see if oil floats to the surface. They then categorize the oily sheen that appears on the surface as light, moderate or heavy.

Hamilton said Enbridge’s complaint—that the poling technique is imprecise—is valid. But he also said that poling is the best available technique for measuring submerged oil.

The EPA has tried to standardize the results by poling only when water temperatures are above 60 degrees Fahrenheit, he said. That’s why the agency is waiting until the weather warms before conducting a new survey.

Of the three “hot spots” of submerged oil—Morrow Lake, Ceresco Dam and Mill Ponds—Morrow Lake is of greatest concern. The lake has the largest amount of oil and is the furthest downstream, Hamilton said, so scientists worry that the oil could migrate downstream to parts of the riverbed that weren’t previously contaminated. Initially, the submerged oil in Morrow Lake was largely confined to the upper third of the lake. But follow-up assessments showed it has spread to the lower two-thirds of the lake.

Efforts to clean the upper portion of the lake may have helped the oil migrate downstream, Hamilton said. Dredging—the most effective method for removing submerged oil—is also expensive and damaging to the ecosystem. In the fall of 2010, Enbridge began testing cheaper, less invasive cleanup techniques, using jets of air and water to stir up the sediment. That “agitation” method continued through 2011, around the time when most of the oil in Morrow Lake is believed to have spread, Hamilton said.

“It’s quite possible the attempts to clean it up in the delta [upper third of the lake] made it more likely to move” downstream, he said.

The dredging ordered by the EPA will be a time-consuming process that could take months. Enbridge will need to secure permits from Michigan state authorities and set up a staging area for its equipment.

When three acres of the river were dredged near Ceresco Dam in 2010, the contaminated river sediment was pumped into large PVC tubes. The water was slowly pressed out of the tubes and transferred to a portable water treatment plant. The processed water was returned to the river, and the solid material left in the tubes was tested to determine whether it could be taken to a regular landfill or shipped to a toxic substances landfill.

Hamilton expects the upcoming work to follow a similar process, but on a much larger scale. In a recent document filed with the Securities and Exchange Commission, Enbridge said the required work would cost about $175 million. 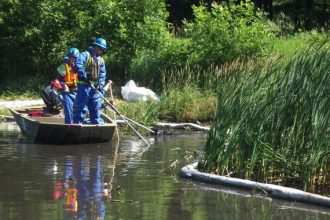