Mexico promised on Friday that its emissions of greenhouse gases will peak by 2026 and then begin to decline, making it the first developing country to present a formal climate pledge under a United Nations process that is meant to rope in all the world’s nations, rich and poor.

Mexico’s pledge is a major milestone on the road to Paris, where by the end of this year the UN wants to complete a comprehensive climate pact.

Negotiators agreed in Lima last year that countries that are ready should declare their goals, known as Individually Determined National Contributions, or INDC’s, by March 31. They urged all nations to announce fair and ambitious goals well before the final December talks in Paris.

The European Union has already filed its INDC with the UN’s Framework Convention on Climate Change, which manages the negotiations, as have Norway and Switzerland. All call for significant reductions in the coming decades. The Europeans are already the clear leaders in cutting emissions.

The United States is expected to make its pledge official by March 31, and China may also meet the deadline. China is the world’s largest emitter of greenhouse gases, and the U.S. is the second largest.

Mexico said its plan would lead to greenhouse gas emissions in 2030 that are 22 percent lower than would have occurred on a business-as-usual course. “This INDC is consistent with Mexico ́s pathway to reduce 50% of emissions by the year 2050, with respect to the year 2000,” it said.

That would make Mexico’s announcement a bit more ambitious than what is expected from China, but not as ambitious as what the U.S. will offer.

When President Obama visited Beijing last year, the United States said it would cut its emissions by 26 to 28% below its 2005 level in 2025. China said it would try to achieve the peaking of CO2 emissions around 2030 and to make its best efforts to peak earlier, if possible. Along with the European Union’s promise to cut emissions 40 percent below 1990 levels by 2030, these pledges, accounting for more than half of the world’s carbon pollution, have gotten the ball rolling, but are not sufficient to head off the worst risks of climate change.

The climate talks aim to  limit the total world emissions to a level consistent with no more than 2 degrees Celsius of warming by the end of the century. To do this, every nation will have to stop emissions from growing, and the world as a whole will have to cut emissions at least in half by mid-century and essentially to zero by late in the century, scientists have calculated.

Many experts are looking for Latin America to pave the path for other developing nations to tread the new climate-clearing path.

“While the devil is in the details, Mexico’s plan to peak its emissions by 2026 is particularly encouraging and should inspire others to follow a similar course,” said Jennifer Morgan, climate director at the World Resources Institute. The group, a non-governmental organization deeply involved in the Paris process, has developed tools to help nations develop their pledges and keep track of them.

“As a country that enacted a groundbreaking, comprehensive climate change law in 2012, Mexico clearly understands the threat of climate change,” Morgan said.

Mexico’s former president, Felipe Calderon, presided over the UN climate negotiations in Cancun in 2010, and is widely credited with helping to salvage the treaty process after the disappointing results of talks the year before in Copenhagen. He has remained active in the climate cause ever since.

The White House issued a statement welcoming Mexico’s pledge as a “landmark step in the global transition to a low-carbon economy.”
“Mexico is setting an example for the rest of the world by submitting an INDC that is timely, clear, ambitious, and supported by robust, unconditional policy commitments,” it said. 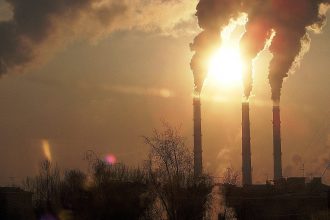