Donald Trump vowed Thursday that if elected president he would dismantle the landmark global treaty to tackle climate change endorsed by the whole world in Paris last year.

Instead, he promised the domestic fossil fuel industry a no-holds-barred, America-first development policy aimed at maximizing production of coal, oil and natural gas.

Speaking on the day he clinched the delegates to win the Republican presidential nomination, Trump delivered his first substantive speech on energy and climate policy before an enthusiastic audience of several thousand in North Dakota, the heart of the nation’s fracking fields.

“We are going to turn everything around,” he said at the Williston Basin Petroleum Conference in Bismarck, “and quickly, very quickly.”

Trump pledged that he would undo the Clean Power Plan, which, if it survives legal challenges, would sharply reduce carbon emissions from power plants. The plan is at the heart of Obama’s climate agenda. He also promised to rescind any regulations that he felt unduly burdened energy suppliers.

“Here is my 100-day action plan: Rescind all the job-destroying Obama executive actions, including the climate action plan,” Trump said. That overarching plan is the entire program for reducing U.S. emissions of greenhouse gases in line with the nation’s Paris pledges.

But that objective was only one side of the energy coin that Trump stamped with his neo-isolationist motto, “America First.”

The other side, he said, was to achieve what he called “American energy dominance”—a world in which the U.S. dominates global energy supplies just as heavily in the future as it dominated energy demand in the past.

And in his vision, King Coal would be restored to its throne.

He called any regulations that caused the closure of old coal plants, or blocked the opening of new ones, “stupid.”

Nor would there be any more talk of moratoriums on drilling or mining public lands and waters in a Trump presidency.

At the ideological core of his argument was this theme: that the nation’s fossil fuel resources are a “treasure,” a hoard of “wealth” bequeathed to the American people, with the fossil fuels industry cast as benign trustees or middlemen facilitating access to prosperity.

At one point, putting the value of unexploited fossil fuel reserves at $50 trillion, he marveled: “Think of that, we’re loaded.”

Perhaps Trump’s most novel notion was to revive the Keystone XL pipeline project—but with a proviso asking the Canadian operator TransCanada “for a big piece of the profits of that.”

After the Obama administration rejected the pipeline, TransCanada said it would sue for billions of dollars in compensatory damages, claiming that the rejection violated the North American Free Trade Agreement.

Trump has always described NAFTA as a bad deal. His contempt for the Paris agreement on climate change is also unrestrained.

Basically, his approach would strangle the nascent treaty in the cradle. Without the U.S. on board, it would be meaningless, and there is no prospect for a renegotiation, after 25 years of work.

Any such outcome would dismay many of America’s closest allies, especially in Europe, and undermine an emerging consensus among leading businesses around the world that now is the time for strong, consistent market signals to drive a new clean energy economy forward.

Trump also said the United States should no longer make any contribution to helping other nations confront the costs of climate change.

“We have deep problems and we can’t be sending our money all over the world,” he said.

The problem with the treaty, he claimed, is this: “It gives foreign bureaucrats control over how much energy we produce, controlling what we are using and what we are doing on our own land and in our country—no way!”

This false depiction of the climate treaty—whose central feature, created at American insistence, is that each country controls its own approach—won loud cheers.

So did Trump’s lament that the Environmental Protection Agency was being unleashed by Obama and Clinton to “control every aspect of our lives and every aspect of energy.”

Trump said his environmental agenda would deal only with “real” environmental issues, which he said included clean air and clean water, not “phony” ones, plainly including climate change in his view.

One of his goals was to define as sharp as possible a distinction between himself and Obama-cum-Clinton. (He didn’t dwell on the energy and climate views of Bernie Sanders.)

Another goal, perhaps, was to woo one of the richest sources of Republican campaign finance at the very moment when the Trump campaign needs to raise big money and fast.

Trump seemed unfazed at the reaction among environmentalists, which ranged from alarm to ridicule. “Political activists with extreme agendas will no longer write the rules,” he said.

He did say that “we will work with conservationists whose only concern is protecting nature.” He did not elaborate on where the line might be drawn between nature and the planet’s climate. 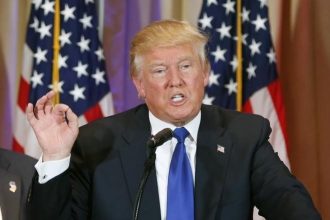