A federal judge in California has dismissed lawsuits by San Francisco and Oakland that sought to hold the fossil fuel industry financially responsible for the global warming damages related to rising sea levels.

Even though he called the dangers of climate change “very real” and noted that fossil fuel companies did not dispute that the burning of their products causes it, U.S. District Court Judge William Alsup said the issue should be handled by Congress and by treaty, not in a federal liability lawsuit.

“The problem deserves a solution on a more vast scale than can be supplied by a district judge or jury in a public nuisance case,” Alsup wrote in a 16-page opinion issued Monday.

While the ruling gave the fossil fuel companies what they wanted in this case, it’s just one of several similar lawsuits brought by U.S. cities and counties. Alsup’s ruling put the other cases in the spotlight, especially those before  California state courts, where the law is friendlier to municipal plaintiffs.

Environmental lawyers who argued before Alsup said they were disappointed by his decision. But they said they were also encouraged because, after hearing testimony on the scientific consensus on climate change in an unusual tutorial, he got the industry to endorse the robustness of the science in a court of law.

He heard the case only because he ruled that it belonged in his court rather than in a state court, where the plaintiffs brought it.

In contrast, U.S. District Court Judge Vincent Chhabria ruled earlier this year that similar cases brought by Marin and San Mateo counties and the city of Imperial Beach could be best adjudicated under California law. That ruling on venue is being appealed by the industry.

Alsup’s ruling on the merits shouldn’t have much bearing on the other California cases, especially those that have survived attempts by the industry to have them moved to federal court, said Ann Carlson, an environmental law professor at the University of California at Los Angeles School of Law.

“The judge in those cases rejected the motion to remove and remanded the cases back to state court,” Carlson said. “State law will govern those cases, not federal law. And state law is much more favorable for the plaintiffs than federal law is.”

A Setback, But Cities Aren’t Giving Up

In a case that saw the Trump Administration weigh in on the side of the industry, the two cities were fighting to force the companies to pay what could have totaled billions of dollars for the coastal infrastructure to protect property and neighborhoods against sea level rise.

Alsup ruled that the solution is not a legal matter but rather a policy matter.

“While it remains true that our federal courts have authority to fashion common law remedies for claims based on global warming, courts must also respect and defer to the other co-equal branches of government when the problem at hand clearly deserves a solution best addressed by those branches,” the judge wrote.

Reaction from Oakland and San Francisco officials predictably reflected both disappointment and resolve to continuing the fight though appeals.

“This is obviously not the ruling we wanted, but this doesn’t mean the case is over,” said John Coté, communications director for San Francisco City Attorney Dennis Herrera.

Although Alsup’s ruling was a setback, Coté said the case forced a public airing of climate science conclusive of the industry role in climate change. “Our belief remains that these companies are liable for the harm they’ve caused,” he said.

“We believe our lawsuit presents valid claims and these defendants must be held accountable for misleading the American people about the catastrophic risks to human beings and all forms of life on this planet caused by fossil fuel-driven global warming and sea level rise,” she said in a prepared statement.

The Oakland and San Francisco lawsuits mirror those filed in the last nine months by six other California cities and counties, as well as by New York City and in Colorado and Washington state. Some of those lawsuits seek financial compensation to fight the climate risks that go beyond sea-level rise and include wildfire and drought.

The industry has challenged each of the California cases, saying they belong in federal court because federal statues under the Clean Air Act govern emissions and take precedence over state laws.

San Francisco and Oakland have faced an uphill battle ever since the cases landed in Alsup’s court earlier this year. Unusual requests by Alsup for a climate tutorial and legal essays addressing the question of how to hold fossil fuel companies responsible without losing the benefit of fossil fuels focused added attention on the cases.

It appears Alsup wrestled with that question.

“With respect to balancing the social utility against the gravity of the anticipated harm, it is true that carbon dioxide released from fossil fuels has caused (and will continue to cause) global warming,” the judge wrote.

“But against that negative, we must weigh this positive: our industrial revolution and the development of our modern world has literally been fueled by oil and coal. Without those fuels, virtually all of our monumental progress would have been impossible.”

Ultimately he deferred responsibility for balancing the pluses and minuses of fossil use to the “expertise of our environmental agencies, our diplomats, our Executive, and at least the Senate.”

The judge also brushed aside the cities’ nuanced arguments that federal pollution laws were not binding in this case because they were suing the companies for producing the fossil fuel not for creating the emissions, said William Ruskin, a lawyer who has spent his career defending corporate giants against tort, environmental and liability claims.

Ruskin said the cities were themselves responsible for their crumbling infrastructure.

“The failure to protect against rising sea levels are just one piece of this larger phenomenon,” he said. “There is a failure on the part of our municipal, state and local governments to raise taxes or issue bonds to address these longstanding problems.”

The Difference in State Courts

Pat Parenteau, a professor of environmental law at the Vermont Law School who has advised some of the municipal plaintiffs, said Alsup’s ruling fails to address the central question of whether the cities have valid common law claims.

“This is a pollution case, this is what it is,” Parenteau said. By citing preemption and blaming the victims, Alsup “invokes these various doctrines but they don’t have any relevance to carbon pollution.”

Parenteau said he thinks that Alsup will be overturned on appeal.

The lawsuits, as initially filed in California state courts, rested on the state’s strong public nuisance statutes. The cities claimed that the oil and gas companies knowingly created a public nuisance from the heat-trapping greenhouse gases generated by burning fossil fuels, which were responsible for sea level rise that threatens to overwhelm their communities.

If a city prevails in such a case, it would break new legal ground, but would build on existing precedents. An analogous case instigated by California cities and counties against three paint manufacturers rested on the public nuisance theory that lead paint in old homes constituted a danger. After years of litigation, the companies lost in court and were ordered to pay more than $1 billion in damages. The companies continue to fight the ruling via legislation or ballot referendum. 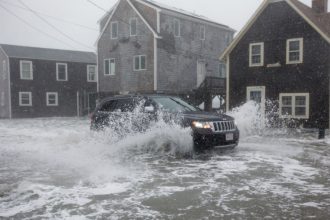