An activist who became a hero to campaigners for disrupting a Bush administration auction for the oil and gas industry with $1.8 million in bogus bids was sentenced to two years in prison on Tuesday.

Tim DeChristopher was immediately ordered into custody, and fined $10,000. He had been facing a potential sentence of up to 10 years and a $750,000 fine.

As Bidder No. 70, DeChristopher disrupted what was seen as a last giveaway to the oil and gas industry by the Bush administration by bidding $1.8 million he did not have for the right to drill in remote areas of Utah. He was convicted of defrauding the government last March.

In a phone conversation with The Guardian, a day ahead of sentencing, he said he was expecting jail time: “I do think I will serve some time in prison. That is what I think will be the next chapter in my life.”

DeChristopher’s lawyers had argued that his actions in December 2008 were a one-off, and that the judge should show leniency. They argued DeChristopher had not intended to cause harm.

However, Judge Dee Benson said DeChristopher’s political beliefs did not excuse his actions.

DeChristopher said he did not have a clear plan when he turned up at the auction in Salt Lake City in December 2008.

“At the time I went in with a very direct action kind of mindset thinking that if I can cause enough delay, stop this action and keep oil in the ground, then that would be worth it,” he said.

He had come straight from writing one of his finals, unshaven and in an old down jacket. “I certainly didn’t look like anyone who was there,” he said. “I didn’t pretend to be an oil executive or anything.”

Officials from the federal Bureau of Land Management asked if he wanted to bid. DeChristopher said yes, still thinking at that point that he just wanted to shout something or cause a disruption.

But by the time the auction was over, DeChristopher had driven up prices on some parcels and made winning bids on 14 pieces of land — some of it near national parks. He knew he had no money to pay for it.

The Obama administration later cancelled most of the sales, because of doubts about Bush’s leasing plan.

DeChristopher’s defense was complicated from the start when the judge refused to hear arguments that he had been compelled to act, to prevent a greater evil. In this case, climate change.

But while the argument did not move the court, it gained DeChristopher a following on campuses and among an older generation of activists. He also founded a civil disobedience group, Peaceful Uprising.

“Tim is a hero to me,” wrote Peter Yarrow, the folk singer, and member of Peter, Paul and Mary, in an article in the Los Angeles Times on Tuesday that likened DeChristopher to the leaders of the civil rights movement.

“Throughout American history, acts of civil disobedience have led to change. Think about the Underground Railroad that helped escaped slaves to freedom, or about the courageous actions of people like Rosa Parks, who refused to stay in the back of the bus simply because of their skin color. Without this kind of defiance of unjust laws, our country would likely still be denying people of colour basic freedoms.” 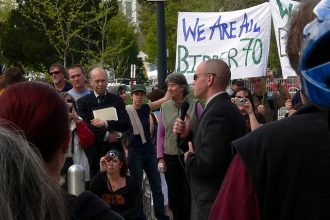 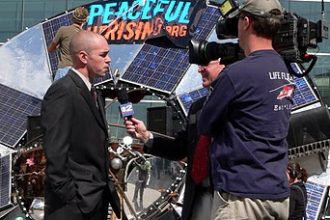