New natural gas pipelines may not be needed and may not justify damage to the environment, the attorneys general of seven states and the District of Columbia argue in comments filed Wednesday with federal regulators in charge of pipeline approvals.

The comments came in response to the Federal Energy Regulatory Commission’s request in April for comments on whether the commission should revise its current policy for pipeline approvals, set in 1999.

Since 1999, FERC has approved approximately 400 natural gas pipeline projects while rejecting only two. Pipelines built over that time have added 180 billion cubic feet per day of pipeline capacity—nearly twice the average daily consumption of natural gas in the U.S. in January 2017 and greater than the peak of 137 billion cubic feet per day during the 2014 “Polar Vortex” cold snap, according to a 2017 report by the economic consulting firm Analysis Group.

The state officials wrote to FERC that greater consideration needs to be given to environmental costs, including climate change, as well as to the increased costs to consumers who typically pay higher rates to cover the capital costs of pipeline projects, which can exceed $1 billion.

“For too long, FERC has disregarded the perspective of state and local governments, ratepayers, and other stakeholders, and approved new gas pipelines without a full evaluation of regional needs and advances in energy policy,” Massachusetts Attorney General Maura Healey said in a statement.

“By determining public benefit without regard to adverse environmental impacts and without consideration of the climate harm caused by a project, the Commission is failing to meet its obligations under both the NGA [Natural Gas Act] and NEPA [National Environmental Policy Act]” Healy wrote in her public comments along with attorneys general from Illinois, Maryland, New Jersey, Rhode Island, Washington and the District of Columbia.

“In cases where the State ultimately declines to issue required permits or certifications, landowners will have suffered unnecessary condemnation of their land and, in some cases, irreversible environmental damage will have occurred,” Underwood wrote.

Environmental advocates are concerned that continued pipeline approvals will lock in U.S. dependence on fossil fuels for decades to come.

“Building pipelines that are not needed will lead to billions of dollars of stranded assets and slow down our process to building cleaner energy solutions,” Gillian Giannetti, an attorney with the Natural Resources Defense Council, said.

With the rapid decline in the cost of renewables, the economics of building gas pipelines that are meant to last 40 to 60 years no longer adds up, Jonathan Peress of the Environmental Defense Fund said. “In 15 or 20 years, it is clear that alternatives to gas are going to be more economic than building pipelines, but yet these pipelines will still be under contract, people will still be paying for them,” he said.

Similar sentiments were expressed by former FERC chair Norman Bay, who warned of overbuilding the pipeline system and burdening future ratepayers before he stepped down from the commission in 2017.

FERC Could See Some Changes, If Temporary

Utilities and officials in the gas and pipeline industries have also weighed in on FERC’s request for comments, with many urging the commission to generally continue the status quo.

Some companies suggested the commission takes steps to reduce delays involving concerns by state and local agencies, and some industry groups expressed their opposition to the idea of FERC using the social cost of carbon in environmental reviews.

The Enivornmental Protection Agency’s Office of Federal Activities had suggested in comments filed in June that it could provide FERC with tools for quantifying greenhouse gas emissions. But the new head of EPA’s Office of Policy, Brittany Bolen, “clarified” EPA’s position in new comments filed this week, saying those tools “may not be appropriate” for FERC and don’t represents Trump administration policy.

The deadline to submit comments was July 25. The commission will now review all comments and determine what if any changes need to be made to its pipeline approval process.

FERC currently has five commissioners, including two Democrats who have expressed economic and environmental concerns about some individual pipelines. One of FERC’s three Republican commissioners plans to step down in August, which will leave the commission split until a replacement can be nominated by President Trump and confirmed by the Senate. 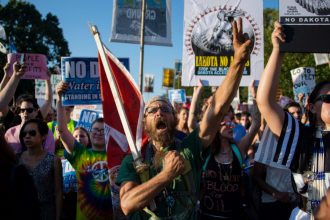 Public Comments on Pipeline Plans May Be Slipping Through Cracks at FERC, Audit Says