A new study claims to leave little room for doubt that the world can run 100 percent on renewable energy, and it even maps how individual countries should best make this transition—by mid-century.

Jacobson and his Stanford colleagues published the analysis in a draft paper online to coincide with the start of global climate talks in Paris on Nov. 30. In those vastly complicated negotiations, most of the world’s nations have agreed on at least one thing: keeping the earth’s warming to within 2-degrees Celsius compared to pre-industrial levels—a target that scientists agree is relatively safe for the planet––will require a wholesale transformation of the world’s energy economy.

The paper, which will likely be submitted to scientific journals for publication next year, offers detailed roadmaps showing how most countries can make the switch to run entirely on clean energy across all sectors, from electricity to transportation to agriculture, as early as 2050.

Focusing on the 139 countries with available 2015 energy data, researchers first used computer models to calculate how each nation’s energy demand and mix would change by 2050. This so-called “business-as-usual” scenario was based on the assumption that the countries would continue to rely on conventional fossil fuels such as coal, oil and natural gas.

Next, the researchers determined how each country could meet its future energy demands using only renewable sources. Under this “wind, water and solar” scenario, every country’s ideal renewable energy mix was calculated based on its existing energy infrastructure and available clean energy resources, such as sunlight and wind. The researchers concluded that making this switch would lower a country’s total energy demands because clean energy sources are more efficient than fossil fuels. They also concluded the transition would curb global warming, create jobs, and reduce air pollution, which, in turn, would boost public health.

Take the United States, for example. By pursuing business as usual, the U.S. would require a total power load of 2,310 gigawatts by 2050. Under a clean energy scenario, however, the country would need only 1,296 gigawatts of power, the study said. Most of the energy would come from onshore and offshore wind (48 percent), utility-scale and rooftop solar (40 percent), and a mix of other sources, including hydropower, geothermal and wave energy. The estimated total electricity, health and climate cost savings of this transition would amount to about $8,000 per American per year (in 2013 dollars).

Jacobson’s team has also conducted a parallel study, recently published in the journal Proceedings of the National Academy of Sciences. That study dives deeper into the United States’ clean energy transition, offering energy roadmaps for all 50 states, using the same modeling approach applied in the global study.

If all the 139 countries succeed in getting 80 percent of their energy from renewables by 2030 and 100 percent by 2050, the Stanford researchers said, the world’s warming would stay below the 2-degrees Celsius warming threshold. They also predict about 22 million net jobs would be created.

Getting there won’t be easy or cheap, Jacobson explained. The price tag of greening the world’s energy system is $100 trillion, or $2 million per megawatt, over the next 35 years. Even without overhauling the energy system, the International Energy Association expects about $60 trillion should be invested during that same period to maintain electric grids and power plants and improve energy efficiency.

The analysis doesn’t say where the trillions should come from—or prescribe policies—but it shows “the burden of proof is now on the people who want to grow fossil fuels in any shape or form to explain to [the public] why they are doing something that we know is worse for the planet,” Jacobson said.

As of 2014, only 3.8 percent of the power capacity needed for 100 percent clean energy worldwide had been installed. Norway, Paraguay and Iceland lead the transition because they have successfully tapped their vast hydropower or geothermal resources. On the opposite end of the spectrum, there’s a mix of developing nations such as Trinidad and Tobago and oil-rich countries such as Saudi Arabia and Qatar. The United States is in the middle, ranking 56th out of 139 countries in terms of its progress toward 100 percent renewables by 2050.

Jacobson’s study is not the only recent report drumming up support for renewables. Earlier this month, the International Energy Agency released its World Energy Outlook 2015 report, which demonstrated renewable energy is increasing. Despite that trend, the agency expects growth in coal and other fossil fuels unless other countries––notably India––change their policies.

In addition, the International Renewable Energy Agency released a recent study suggesting renewables could make up 36 percent of the world’s energy mix by 2030. Both reports said furthering the growth of clean energy is an essential piece in addressing climate change.

“With the climate challenge in front of us, this can easily lead people to worry about our ability to meet that challenge,” said Rachel Cleetus, lead economist and a climate policy specialist at the Union of Concerned Scientists. “The bottom line from all these studies is the challenge here is political will.”

“Mark’s findings are not extreme,” said Karl Rabago, executive director of the Pace Energy and Climate Center at Pace Law School, in White Plains, N.Y. “They are well established,” said Rabago, reflecting the latest science and experience in the lab and on the ground with how efficient and productive different clean energy sources can be.

According to Rabago, “The real question now is: are we finally ready to get started?” 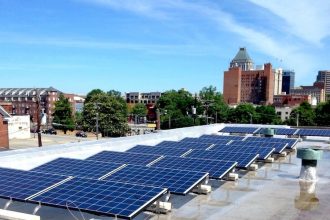