There are greater concentrations of arsenic and uranium in the drinking water of communities nationwide that have a high proportion of Black, Latino or Indigenous residents, compared to the levels in other locales, according to a team of researchers at Columbia University.

The findings, part of a study published in Nature Communications, noted that arsenic and uranium levels in drinking water were higher for Indigenous and Latino communities across the country. Among Black Americans, areas in the West and Midwest showed higher levels of those toxins.

Researchers attributed the water quality disparity to multiple factors, including utility systems that are unevenly regulated or that have fallen into disrepair as a byproduct of structural racism that typically leads to a poorer quality of life in communities of color.

“It’s not typically one mechanism that’s at fault, but it’s multiple ways in which structural racism is acting upon water, utilities and regulators that result in these types of inequities,” said Anne Nigra, one of the study’s authors and an assistant professor of Environmental Health Sciences at the university. “It’s rarely one person making a racist decision.”

Nigra said that when planning the study, she and her colleagues wondered whether the arsenic and uranium concentrations in regulated public drinking water could be associated with the racial and ethnic makeup of a community. The work by Nigra and her co-researchers is one of the first studies that evaluates this association between race and metal concentrations in water on a national scale.

For example, researchers found that a community with at least a 10 percent higher proportion of Latino and Hispanic residents compared to white residents was typically associated with 17 percent higher uranium in their public water systems than communities heavily populated by their white counterparts.

However, Nigra said, the picture becomes more complicated nationwide. Contaminants and racial and ethnic groups are spread out across America, so researchers decided to look closer at specific regions. When they did, they found the link between the higher arsenic levels in public drinking water and areas dominated by non-Hispanic Black residents in the western United States.

In order to bring this to light, Nigra said, she and her colleagues needed two things: A marginalized, racial, ethnic group to be prevalent in that area and the actual water contaminant to be present to some degree in the underlying geologic structure type.

“And when those two things overlap, that’s when we see big inequities,” she said.

“Studies like this are important because they’re highlighting the reality that our communities are already living in, which is often our low-income communities of color bearing the brunt of decades of contamination that they didn’t cause,” said Kelsey Hinton, a spokeswoman for the Community Water Center, a water justice organization that works with Hispanic farm worker communities in California. “And it’s something that we have to continue to take seriously.”

In a 2001 study, the National Academy of Sciences’ National Research Council found that men and women who consume water containing 3 micrograms of arsenic daily have about a one in 1,000 increased risk of developing bladder or lung cancer during their lifetime, and at 10 parts per billion, the increase is greater than 3 in 1,000. The estimates are greater than those on which the EPA based its current standard.

Hinton said that in Tulare County, California, “there are really high incidences of contaminants found in the groundwater, including things like uranium or arsenic, both from agricultural discharge or industrial discharge.”

“This didn’t have to be an inevitable problem for the state, that communities of color were impacted by water contamination,” said Hinton.

“My fear is that if climate change does further concentrate arsenic and uranium and other contaminants in underlying water sources, that these inequities across racial ethnic groups are going to be exacerbated,” Nigra said, “unless there is aggressive intervention, regulatory intervention, technical intervention and financial assistance.

Clare Pace, a scientist at the University of California-Berkeley, studies the health effects of environmental contaminants and published a September 2021 study examining inequities in drinking water in California. She said studies like hers and Nigra’s can help bring these issues to the table.

“At least my sense is that the most important thing is not just creating the data,” said Pace, who said her research developed a data tool that community members can use to get information about how to get their water tested and treated, as well as how to qualify for a bottled water program and how to get involved in their local water board. “It’s creating an opportunity for self-advocacy where communities can learn about the risks they face and can do something about it.”

The EPA is beginning to take another look at its cancer risk estimate for arsenic, according to a November notice. Still, advocates like Erik Olson of the Natural Resources and Defense Council believe that a new standard for arsenic in drinking water is likely many years off.

Olson hopes to see federal funds from the Bipartisan Infrastructure Bill used to address this problem. About $11.7 billion from the new law is designated for state investments into clean drinking water. He said the federal drinking water money “needs to be targeted towards communities that need it most.”

Tommy Rock, a geologist at Princeton University, is uniquely positioned at the intersection of personal stakeholder and researcher.

He was reared on the Navajo Nation reserve in Monument Valley, Utah, and his main source of drinking water growing up was a natural spring.

As a child, Rock knew many members of the Navajo Nation who worked in uranium mining—several of whom died of cancer, including his grandfather. As an adult, Rock often wondered if the veins of uranium running under the soil might have contaminated the water that he and his fellow members of the nation drank everyday.

Although he was not a researcher on the study conducted by Nigra and her team, he said her group’s findings aligned with his years of research, which helped discover uranium contamination in the drinking water of the small community of Sanders in eastern Arizona. He’s also examined uranium and arsenic water issues on Navajo lands and testified before Congress on uranium mining contamination.

He said he hopes to see grassroots organizations playing more of a central role in addressing the lack of clean drinking water access in rural and native communities.

“It’s not surprising to see that there’s a big difference when it comes to people of color, minority folks, especially in [poor] socio-economic situations,” said Rock. “There’s a big discrepancy on access to safer public water across the nation.” 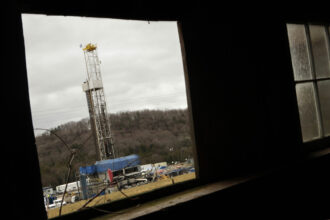