When New Mexico utility regulators decided to partially close the state’s largest coal-fired power plant in December, they punted the controversial discussion of how long the state should rely on coal.

The San Juan Generating Station provides about a third of the state’s power. During more than two years of caustic debate, the plant became a battleground over the state’s long-term energy future. Coal formed the center of the controversy.

“This is probably the landmark case for New Mexico,” Commissioner Karen Montoya of the New Mexico Public Regulatory Commission told InsideClimate News last spring. “It could determine generation in New Mexico for years to come.” Montoya was part of the majority of commissioners who voted 4-1 for the deal on Dec. 16.

But even with a deal in hand, that future remains far from resolved—and New Mexicans remain divided over how long the state should rely on coal. After an extraordinarily long review, state regulators essentially punted the major question: whether to shut down the plant for good and bring far more renewables online. The issue will not be taken up again until 2018.

Since 2010, about 230 coal plants have been retired or slated for retirement, according to the Sierra Club’s Beyond Coal campaign. They have been hit with the double-punch of recent federal coal pollution regulations—including the Clean Power Plan—and increased competitiveness of natural gas and renewables, such as wind and solar. New data from the U.S. Department of Energy suggests 2015 was the first year natural gas surpassed coal as the nation’s top source of electricity.

Most of the shutdowns have been old or small coal plants. As the coal market continues to nosedive, however, operators of large and middle-aged plants, such as San Juan, which is more than 30 years old, have contemplated partial or full retirement.

In 2012, the U.S. Environmental Protection Agency told San Juan’s owners to reduce the plant’s toxic air emissions. At the time, the plant was among the most polluting power sources in the nation. To bring the plant into compliance, the federal regulators and the Public Service Company of New Mexico (PNM) agreed to partially shut down the plant. PNM filed for state approval of this plan and a proposal to replace the lost power in December 2013.

Under the final agreement reached last month, two of the plant’s four units will be retrofitted with emission-reduction technology, and the remaining two units will be retired by the end of 2017. Doing so will bring the plant into compliance with a host of federal air standards, including the Clean Power Plan, which targets greenhouse gas emissions from power plants.

For PNM, the replacement power includes a 134-megawatt nuclear power unit. The utility is also building four solar plants with a combined capacity of 40 megawatts and a natural gas plant with a capacity of at least 80 megawatts.

The rejiggering of the plant’s ownership is perhaps the most controversial element of the deal.

San Juan’s nine original owners are staying on through 2017. After that, four of the owners are leaving as a way to reduce their investment in coal. Of the remaining owners, only PNM was willing to increase its stake in the plant. A PNM subsidiary is also joining as a new owner in 2018.

“The evidence that no utility is investing in coal except PNM, does that not give you pause?” activist Nanasi said in testimony to the commissioners the day of the December vote.

Another question is how much this deal will cost utility customers. PNM says the plan will save customers millions of dollars. But Commissioner Valerie Espinoza, who cast the lone vote against the deal, says that ratepayers will lose out. She explained that PNM has filed a separate regulatory case, which aims to bump rates by more than 16 percent.

Environmental consultants from the Cambridge-based Synapse Energy Economics, Inc., who were hired by New Energy Economy, found numerous mathematical errors and flawed assumptions in PNM’s cost modeling. These findings were shared with the commissioners during the hearing process but many of those issues remain unresolved, Jeremy Fisher, a principal associate at Synapse, said to InsideClimate News.

New Energy Economy cited the alleged inconsistencies in PNM’s modeling, as well as the fact that PNM is increasing its ownership of the coal plant, as two factors driving its appeal.

Responding to the appeal filing, PNM spokesman Pahl Shipley wrote InsideClimate News in an email: “The Commission’s order is based on the facts of this case which were examined and debated in a comprehensive, open process, and is in the best interest of our customers and the state.

“It is unfortunate that NEE continues to misrepresent the facts by stating that the order allows PNM’s use of ‘more coal,’ when in fact the order provides for a significant reduction in the use of coal, and an increase in the use of cleaner resources, including solar and natural gas,” Shipley added.

The approved deal “is a vast improvement over what was originally proposed,” Chairwoman Montoya said in a statement after the December vote. “It protects the public interest and reduces environmental pollution while minimizing economic impacts and keeping utility bills as low as possible.”

The state attorney general’s office, which supported the deal, did not respond to InsideClimate News’s request for comment.

Even some environmental groups are questioning NEE’s appeal. “One of the things we realized is PNM was not going to shut down this plant as a result of the case…they have too much money tied up in that plant,” Steve Michel, chief counsel for the Clean Energy Program at Western Resource Advocates, said to InsideClimate News.

But the compromise deal “provides a definitive path to the future retirement of the plant” as early as 2022, he explained, when the contracts for the two remaining units are set to expire, as well as those for the mine supporting the plant. Those contracts will be evaluated in 2018, Michel said.

The appeal could drag that long, which “seems pointless to me,” said Michel. “We’ll be engaged [with the next regulatory case] by then; in 2018, that’s our best opportunity for additional closure of that plant.” 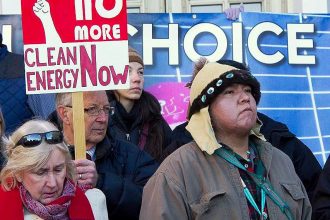 By Zahra Hirji and Naveena Sadasivam