With Biden’s ambitious climate agenda blocked in the Senate, the administration now has an opportunity to look for a win through diplomacy, while at the same time addressing one of the most pressing problems facing the planet.

The plastics industry has exploded in recent decades, with plastic products becoming ubiquitous in daily life. But plastic pollution is now also ubiquitous, found on the highest mountains, in the deepest ocean trenches, in the bellies of whales and the placenta of new mothers after birth.

There’s also a growing awareness of the role of plastics—which are derived largely from fossil fuels—in driving climate change and contributing to environmental injustices.

The plastics problem has reached such a crisis that last week, negotiators gathered in Nairobi in advance of a meeting of the United Nations Environment Assembly, with the goal of launching formal talks on a global treaty to reduce plastic pollution. The assembly meeting begins Monday and runs through Wednesday.

As one of the world’s leading producers of plastics and plastic waste, the United States is expected to play a key role in the negotiations.

Jane Patton, the Louisiana-based campaign manager for the Center for International Environmental Law, sees a robust plastics treaty as something that could give Biden an opportunity to deliver on twin promises to make gains against global warming and for environmental justice, while reducing the scourge of plastic waste.

The president’s Build Back Better legislation with its substantial climate provisions has stalled in Congress. But last year, Patton recalled, Biden specifically mentioned heath and environmental impacts from “cancer alley,” Louisiana’s petrochemical corridor, where plastics are manufactured and there are proposals for building more plastics plants.

A global plastics treaty, Patton said, “is absolutely an opportunity where the Biden administration can have a very clear environmental win, and a justice win, in a space where they have been backsliding since promises that were made.”

She added, “One of the key ways that they can address the environmental injustice of industrial pollution in cancer alley and other places like it is to negotiate an ambitious treaty that addresses emissions from plastics production. And that is what we hope that the administration will do.”

Not Too Specific, but Not Too Vague

What happens in the negotiations in Nairobi could determine the eventual scope or framework of a global plastics agreement.

To be hammered out by diplomats are questions such as whether the agreement should be limited to dealing only with managing plastic waste in the ocean or whether it should address the more expansive problem of pollution across the plastics life-cycle, from manufacture to disposal, including what to do about the tiny pieces of plastics debris known as microplastics.

Another point of contention is whether an agreement should somehow set limits on the production of plastics altogether.

A Potentially Greener U. S. Position

Some nations have already crafted their position papers, with the European Union and many countries lining up behind a strong proposal from Rwanda and Peru for a legally binding agreement that addresses the full lifecycle of plastics.

India and Japan have put forward weaker resolutions, and two weeks ago, the United States and France weighed in with positions close to the Rwanda-Peru resolution but with vague enough wording to allow for plenty of diplomatic wriggle room.

Still, environmental advocates who are looking to the United States to back a treaty with a broad scope were pleased. They noted that last November, when Secretary of State Antony Blinken announced that the Biden administration would join the talks—reversing the position taken by the Trump administration—Blinken’s comments appeared to limit the Biden administration’s concerns to plastic waste in the ocean.

But the Feb. 11 joint statement with France goes further, saying that the United States supports the crafting of an agreement “to address the full lifecycle of plastics.” The statement called for an agreement that curbs plastic pollution “at its source,” wording that environmental advocates take to mean at the point plastics are manufactured, not just after they are disposed of.

There have also been calls from environmentalists and industry for legally binding commitments, and the joint statement says the agreement “should include binding and non-binding commitments,” while calling on countries “to develop and implement ambitious national action plans.”

Tim Gabriel, a Paris-based lawyer who is closely following the issue and is attending the talks in Kenya, called the new American position “a subtle yet seismic shift.

“This is the type of language that the U.S. has not until now put its name behind,” Gabriel, who works for the Environmental Investigation Agency, a non-profit organization based in London and Washington, said.

Björn Beeler, the international coordinator for the International Pollutants Elimination Network (IPEN), comprising more than 600 public interest nongovernmental organizations in 128 countries working to eliminate toxic pollutants, said“This is an opening of a posture of a major, major actor, so that is good.”

“The U.S. has huge responsibilities and huge liabilities in this conversation,” Beeler said, adding that the earlier statement from Blinken, focused only on keeping plastic waste out of the ocean, “was very irresponsible.”

Three days after the announcement by France and the United States, the American Chemistry Council, a lobbying group that has emerged as a leading voice for industry in the treaty debate, also found some language to its liking in the joint statement, and said it saw “significant alignment” between the council’s goals and those of the two countries.

The ACC also favors an agreement with binding and non-binding elements, and wants to work toward a “circular economy,” another term mentioned by the U.S. and France, according to a statement from Joshua Baca, the ACC’s vice president of plastics. A circular economy means different things to different people, but the Environmental Protection Agency, citing language in the Save Our Seas Act, describes it as an

economy that “reduces material use, redesigns materials to be less resource-intensive and recaptures waste as a resource to manufacture new materials and products.”

Still, the ACC remains opposed to any agreement that attempts to put caps on plastics production or consumption.

Matthew Kastner, an ACC spokesman, declined to elaborate on how ACC views the United States’ opening position, or to go beyond the wording in its own public statements.

“We are focused on the actual negotiations, not on speculating about the word choice of a statement,” Kastner said. “ACC’s statement should be taken at face value—we want a legally binding agreement and are pleased to see U.S. leadership on this matter.”

Erin Simon, head of plastic waste and business for World Wildlife Fund, the U.S. arm of a conservation group that operates in 100 countries, said she is “fairly confident” that there will be a mandate for naming an international negotiating committee. The mandate, she said, is likely to include a timeline and a scope. “We are prepared for all eventualities,” she said.

Meanwhile, businesses are joining in, with more than 80 companies, including Coca-Cola, Pepsico, Starbucks and Walmart, calling for a global plastic treaty with legally binding provisions.

They are part of a “large global discussion about how we address this issue,” Simon said.

Also in recent weeks, the U.S. Plastics Pact, a consortium of The Recycling Partnership and the World Wildlife Fund that includes companies that depend on plastic packaging, like Coca Cola, Unilever and Walmart, identified 11 plastic packaging items that should be phased out by 2025 because they are “not currently reusable, recyclable, or compostable at scale.”  They include single-use plastic cutlery and plastics made with toxic chemical additives.

“We proliferated our use of plastics for decades without any controls in place,” Simon said. “We are starting to narrow what can go in the shared system.”

‘Things That Cost Money Are Hard to Do’

Global environmental treaties can take years to achieve. A plastics agreement potentially would be the most significant since the 2015 Paris agreement on climate change.

But, he said, just getting the nations of the world to formally recognize the plastics problem is a big first step.

“Cleaning up plastic is going to cost a lot of money,” he added. “And things that cost money are hard to do.”

International agreements are also difficult to legally enforce, Mitchell said, adding that they often rely on peer pressure for countries to follow social norms. Still, he said, such treaties are worthy endeavors.

Difficulties aside, the UNEP Executive Director Inger Andersen on Feb. 9  made a case for a comprehensive treaty, writing in The Times of London that “no corner of the Earth, from mountaintop to sea trench,” has been “left unsullied by plastic.”

Changes are needed to address “the full life cycle of plastics, from the extraction of raw materials to alternatives to improved waste management,” Andersen wrote. That includes changing and eliminating products, designing products for reuse and recycling, and removing hazardous additives.

“By doing this we could reduce the volume of plastics entering our oceans by over 80 percent by 2040, and reduce virgin plastic production by 55 percent,” Andersen wrote, adding, “We could reduce greenhouse gas emissions by 25 percent and create 700,000 additional jobs, mainly in the global south.”

On Feb. 16, the global Break Free From Plastics Coalition delivered a petition to the U.S. State Department, signed by more than 67,000 people and calling for the United States to support a legally binding plastics treaty covering measures across the entire life cycle of plastics

Such political pressure is working, as evidenced by the new statement from the Biden administration, said Patton, with the Center for International Environmental Law.

“This is a significant shift in U.S. foreign policy toward plastics,” she said. “And I think that that is in response to the public outcry and the fact that there is a significant and organized constituency within the United States that is pushing for this change.” 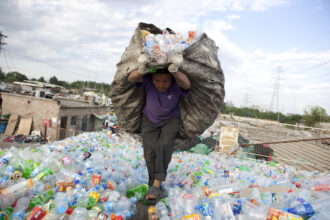 World Talks on a Treaty to Control Plastic Pollution Are Set for Nairobi in February. How To Do So Is Still Up in the Air