In a vote that fell largely along partisan lines, the U.S. Senate on Wednesday passed a resolution effectively vetoing a Trump administration rollback of methane emission regulations for the oil and gas industry. The affirmative vote, which required only a simple majority, marked the first time in this Congress that the upper chamber has used its power to overturn rules passed in the waning days of the Trump administration.

The Congressional Review Act resolution of disapproval, which still needs to pass a vote in the House, would reinstate Obama era regulations on methane emissions from new oil and gas wells. Those rules were enacted to help reduce further increases in emissions of methane, the second largest driver of climate change after carbon dioxide.

The 52-42 vote came as a pair of studies, including a forthcoming assessment by the United Nations, show how countries must go much further in quickly reducing methane emissions to address climate change, as well as the gas’s adverse impacts on human health and food security.

The Biden Administration supported the resolution, which would reinstate federal limits placed on methane emissions from new and modified wells in 2016.

“In order to effectively mitigate climate change, addressing methane pollution from this and other sectors is an urgent and essential step,” the White House Office of Management and Budget wrote in a statement of support.

“Today, Congress put a down payment on the fight against the climate crisis,” said Sen. Martin Heinrich (D-N.M.), the lead sponsor of the resolution.

Separate Obama era regulations requiring leak detection and repair were weakened by the Trump administration through a separate rulemaking that would not be reinstated through the Congressional Review Act resolution.

Several leading environmental advocates said bringing back the 2016 federal regulations is not enough. They noted that, since 2016, Colorado and California have enacted more stringent methane emissions regulations.

“We are recommending to EPA that rather than just reinstate those 2016-era rules they actually issue new stronger standards making the best practices the standard practices nationwide,” said Sarah Smith, super pollutants program director for the Clean Air Task Force. “By doing that they could achieve a 65 percent cut in methane emissions from the oil and gas sector by 2025.  That compares to getting only a 22 percent cut if they just reinstate the old rules and extend them to existing sources.”

“Before pulling the trigger, Congressional leadership will want to ensure they’re not inadvertently tying the Biden Administration’s hands on the methane regulation they’re so eager to do,” said Kathleen Sgamma, president of the Western Energy Alliance, whose group supported the Trump administration’s rollback. “Congress could tie EPA’s hands on a comprehensive approach into the future.”

The Congressional Review Act states that a future administration cannot pass a rule that is “substantially the same” as a rule rescinded by Congress. Depending on how this language is interpreted, it could prevent the Biden administration from adopting stricter methane regulations, because the rescinded rule also dealt with methane emissions.

“No one can be sure how courts will interpret the CRA ban on substantially similar rules,” Cary Coglianese, a law professor at the University of Pennsylvania, said. “No court has ever ruled on this language.”

Two Studies Set Forth the Challenge

However the CRA is ultimately interpreted, climate activists saw Wednesday’s vote as a promising first step in reducing methane emissions. A recent study published in the journal Environmental Research Letters  spelled out numerous ways the United States can go much further in efforts to reduce methane emissions, often at no cost to industry.

The study found that global methane emissions from human activities can be cut in half within the next 10 years, and that half of these cuts could be done at no net cost. If such emissions reductions could be achieved, a quarter of a degree Celsius warming of the atmosphere could be avoided by midcentury. However, if these more ambitious emissions reductions are not pursued, the planet would likely warm an additional two-tenths of a degree by midcentury, the study said.

“We really wanted to explore the opportunity we have now and how big of an impact it could make if we were to go all in on methane action, and these are benefits that we could not get from CO2 mitigation alone,” said Ilissa Ocko, a senior climate scientist with the Environmental Defense Fund.

Carbon dioxide is the primary driver of climate change but, unlike methane, CO2 is a long-lived greenhouse gas, warming the atmosphere for hundreds of years. Carbon dioxide emission reductions made in the coming years wouldn’t curb global warming until the second half of the century, whereas reductions in methane, a far more potent greenhouse gas but one that remains in the atmosphere for only about 12 years, would be felt in coming decades, Ocko said.

“There is a lot we could do now for methane that would have real tangible benefits during our lifetime and also set us on a better course for the future and for generations to come,” Ocko said.

The study found that the vast majority of emissions reductions that could be done at no net cost to the oil and gas sector, because reducing the amount of methane that is vented or leaked into the air would increase the volume of methane, or natural gas, that could be captured and sold.

A second, larger study by the United Nations due to be published early next month, draws similar conclusions about the need for steep cuts in methane emissions to curb warming. A summary of the UN report, reviewed by Inside Climate News, also provides a detailed look at how curbing methane pollution would yield significant societal benefits, including reductions in premature deaths and hospitalizations from ozone pollution and increased productivity in agriculture.

Nearly all global methane emissions that stem from human activities come from just three sectors: fossil fuels, waste and agriculture, according to the report. The report included an interactive, country-specific tool for policy makers to identify the best targets for emission reductions.

“You can set the cost threshold you would like and you can really see where you can most tactically focus your efforts,” said Drew Shindell, an earth science professor at Duke University and lead author of the UN study.  “In Latin America it will be livestock, in China maybe it’s coal, in the Middle East it’s oil and gas.”

The website also provides country-specific information on the benefits of methane emission reductions.

“There is probably a very good reason to want to reduce methane from most anywhere in the world, but they are not necessarily going to be the same reasons everywhere,” Shindell said.  “In India, maybe the most compelling benefit you get is the improvement in wheat yield, because wheat in India is pretty close to a temperature threshold. Whereas in Brazil maybe it’s labor productivity. In China maybe it’s air pollution. All of those things are available whereas before, one study would look at one aspect.”

The study comes as the Clean Air Task Force, the Environmental Defense Fund and other environmental organizations have called on the Biden administration to pledge a 40 percent or more reduction in U.S. methane emissions by the end of the decade as part of its recommitment to the Paris Climate agreement.

At last week’s climate summit, the administration pledged to reduce U.S. greenhouse gas emissions by 50 percent by 2030 as part of its Nationally Determined Contribution to the Paris climate agreement. But the new NDC did not include a specific target for methane emissions.

Shindell said it’s a “missed opportunity” when swift action is needed, but he added there might be other opportunities this year for the United States to increase its commitment before the UN’s next global climate conference in Glasgow in November.

“The EU already is working towards a methane target, and really joining forces with them and trying to assemble a big coalition might in the end be much better than just including it in our NDC and going away,” Shindell said. 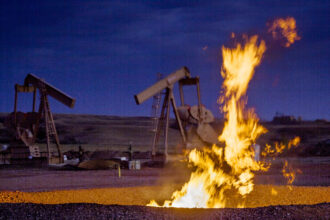 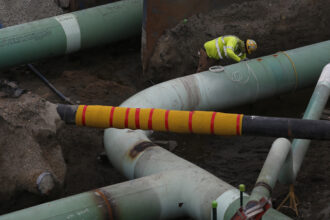 Will a Recent Emergency Methane Release Be the Third Strike for Weymouth’s New Natural Gas Compressor?