A Canadian government think tank is calling for the country to make a seismic shift away from its economic dependence on oil production or risk being left behind as the world moves rapidly away from fossil fuel use.

The draft report, by Policy Horizons Canada, is an unusually frank assessment by a government agency on the uncertain future of fossil fuels, especially considering the large role that oil plays in Canada’s economy. The report is titled “Canada in a Changing Energy Global Energy Landscape,” and says that Canada should begin to adjust its energy priorities to prepare for the significant changes in the energy landscape expected to occur within the next 10-15 years.

The powerful drivers pushing Canada in this direction are the falling costs of renewable energy, led by wind and solar; the increasing proportion of electricity in global energy use; and the pressures on countries to grow their economies while slashing greenhouse gas emissions and dangerous air pollution.

“In combination, these drivers could lead to renewable-sourced electricity replacing fossil fuels as the dominant form of primary energy used in the global economy for most industrial, commercial and personal activity,” the report said.

The authors, citing dozens of scientific papers and articles, said they foresee a near future in which the world’s power plants, factories, industries and vehicles are increasingly powered by wind and solar electricity. That may happen much faster than predicted, “significantly disrupting fossil fuel markets.” And while Canada “would be relatively well placed to take advantage of an electricity-based industrial ecosystem,” the report said, the repercussions on its petroleum assets and economy would be vast.

Alberta has abundant oil—nearly all of it in tar sands—and ambitious plans to develop it. Tar sands production has boomed since 2008, doubling to more than 2 million barrels a day. And the latest report by the Canadian Association of Petroleum Producers estimates that number will grow by an additional 1.55 million barrels a day by 2030 (which is scaled back from previous estimates, but would still nearly double the current output).

According to the Policy Horizons Canada report, the “plausible” rise of cheap renewable electricity “would seem to recommend against long term investments in oil and gas production, refinement, and distribution infrastructure.”

“The shift to electric cars could result in oil demand peaking sooner than forecast,” it said, while competition for the energy markets of the future could be won by those with clean energy technologies, not by those with vast deposits of fossil energy.

Canada’s oil could also face stigma in energy markets because of its high greenhouse gas emissions as pressure mounts to discriminate between fossil fuel products based on environmental impacts, forcing its producers to sell at the bottom with implications for tax revenue. The oil and gas industry was the largest single source of tax revenue from 2008-12, generating $23.3 billion, according to National Resources Canada.

At the very least, the report recommends, Canada’s government “should ensure that the risks of further investments in oil and gas infrastructure be borne by private sector interests rather than taxpayers.”

What’s Behind the Tectonic Shift?

The report, dated March 3 and marked “draft for discussion,” was made public after a May access to information request filed by CBC News. Policy Horizons Canada is a “strategic foresight organization” within the Public Service of Canada.

The panel’s assessment is based largely on the prediction that electricity is on its way to becoming the predominant source of end-use energy consumption in the world.

The report cites statistics that while energy demand from all sources is expected to rise by 37 percent between 2012 and 2040, world demand for electricity demand is projected to increase by 80 percent in the same time span. Driving that shift is the rapidly growing middle class in developing countries led by China, which is increasing its consumption of electricity as people shift from burning wood to electric appliances for light, heating and cooling, and cooking.

“There are also signals that suggest transportation may electrify more quickly than expected” over the next 15 years, the report said.

Increasingly, much of that electricity will be generated by renewables. Many types of renewable-based electricity generation are already cheaper without subsidies than generation by fossil fuel, the report said. And “those that are not are likely to be so within 10 years.” That’s in part because climate change, air pollution and other health and environmental costs will increasingly be factored in to energy supply and consumption decisions by power utilities and companies, adding to clean fuels’ cost advantage.

The report cites as evidence of this transformation the trend of major non-energy companies investing significant sums in renewables as costs decrease and consumers pressure them to act on climate change. IKEA has announced investments of $565 million in wind energy and $100 million in solar energy over the next five years, while Apple has announced a $850 million investment to build a 280-megawatt solar farm in California.

Meanwhile, battery technologies will also drop in price and evolve to allow continuous supply of wind and solar, allowing renewables to replace old coal plants as they are retired  in developed and emerging economies.

Developing countries thought of as potential future consumers of oil, gas and other fossil fuels may “leapfrog” over building a fossil fuel infrastructure and move immediately to clean energy to build their economies, paralleling the rise of cellular phone technology, the report said.

“There’s so much in here that’s a good summary of emerging trends within the energy sector around the world,” said Tim Gray, executive director of the nonprofit Environmental Defence Canada. “I think that the observations are consistent with what we’re seeing in emerging markets around emerging energy, and in commodity markets around fossil fuels.”

The report lays out two possible scenarios for Canada’s energy future in this new landscape. In the first, “Canada continues a narrative that it has energy super power status based on its petroleum reserves,” and it resists movements to divest from fossil fuels or differentiate oil in markets based on environmental impacts. The result is that Canadian oil companies find themselves selling oil to the bottom of the market and losing revenue. The U.S., the main buyer of Canadian oil, would require steep discounts to offset things like potential carbon taxes.

Under this scenario, Canada would risk damaging its international “brand” as its products and services would be considered high-carbon and “dirty” in the global marketplace.

In the second, Canada expands its production of clean electricity and becomes a hub for low-carbon manufacturing and energy-intensive industries like data centers. The country’s products and services are recognized for their low-carbon content. It becomes a climate leader, and continues research into using oil sands for alternative fuels.

According to the report, this would mean that instead of resisting the trends toward renewables, Canada leverages them. Currently, most of the oil produced in Canada is produced for export to the United States. In addition to oil it could export more of its clean energy, the authors said. Already, Canada produces a vast 80 percent of its electricity from hydro, nuclear, solar and wind, according to reports. “Canada has not only sufficient electricity for its domestic needs but capacity to export nearly 10 percent of its production,” the report said.

According to Chris Bataille, an energy economist for the Institute for Sustainable Development and International Relations, the report did not address an important detail. “Everything makes sense to me only if there’s strong policy,” said Bataille. “And by strong policy I mean there needs to be a carbon price of $50 to $100 dollars a ton and possibly even more. Then all of it makes more sense. As it is, it’s a bit overenthusiastic.”

The report also did not address whether this shift is politically feasible. The development of Alberta’s tar sands became an economic cornerstone during the administration of former Prime Minister Stephen Harper, who abandoned the Kyoto Protocol and led a dismantling of environmental regulations. Justin Trudeau of the centrist Liberal Party ousted Harper in last year’s federal election running on a platform of greater support for climate action. He has stopped short of calling for any curtailment in the expansion of the tar sands production.

At the same time, Alberta elected a new prime minister, Rachel Notley, of the leftist New Democratic Party. Last November, she unveiled a provincial energy plan that included a tax on carbon, a cap on oil sands emissions, a phasing out of coal-fired electricity and an emphasis on wind power. But the oil sands emission cap was set at 100 megatons, which will allow for some continued expansion of oil sands extraction.

Canada is also going through a Federal-Provincial-Territorial energy discussion that is looking at creating a pan-Canadian climate plan to meet or exceed the climate target set in Canada’s pledge to the Paris climate agreement. Natural resources remain under provincial—not federal—management, so these discussions take on added significance.

“Canada’s energy strategy is very much in flux,” said Erin Flanagan, director of federal policy at the Canada-based Pembina Institute, a nonpartisan energy think tank. “The new government tends to talk about Canada’s obligation to reduce emissions and to live up to challenge of climate change, and often references that the environment and the economy go together. What that means for domestic production is to be determined.” 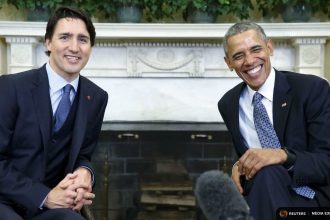 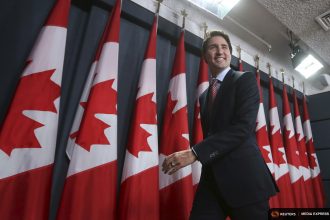