An associate of the Heartland Institute, the think tank devoted to discrediting climate change, taught a course at a top Canadian university that contained more than 140 false, biased and misleading claims about climate science, an expert audit has found.

The course at Ottawa’s Carleton University, which is being accused of bias, was taught for four terms from 2009-2011 by Tom Harris, a featured expert at the Heartland Institute.

Heartland’s core mission is to discredit climate change, and it is currently moving into the education realm. It plans to spend $100,000 on a project countering established teaching of climate change to American school children, an unauthorized release of documents showed.

But the audit report, released on Tuesday, suggests such efforts are already underway on college campuses.

A team of scientists, who reviewed the videotapes of Harris’s lectures provided by the university, found 142 false, biased and misleading claims. The course, which is not intended for science majors, may for many students be the only academic exposure they have to climate change while earning their undergraduate degree.

The report found the course under Harris’s direction systematically deviated from the scientific mainstream on climate change, embracing extreme opinion.

“The content of this particular course is heavily biased against the scientific consensus concerning the anthropogenic causes of dangerous climate change,” the report from the Canadian Committee for the Advancement of Scientific Skepticism said. “The unbalanced nature of the course, the lack of peer-reviewed literature cited, and the non-science audience mean that the course fails to constitute ‘promotion of debate’ and instead merely presents a biased and inaccurate portrayal of contemporary climate science.”

Carleton, in its response, suggested that Harris’s choice of teaching material was an issue of academic freedom. It also noted that the course is not currently being offered as part of the usual rotation of academic offerings.

“Academic excellence is a priority at Carleton and we have a process in place for reviewing courses that balances context with academic freedom and the rights of our instructors as outlined in their collective agreement,” spokeswoman Caitlin Kealey said in a statement. “We are guided by rigorous science and the science supports the existence of climate change.”

The head of the earth sciences department, Tim Patterson, did not respond to requests for comment.

Harris, a mechanic engineer by training who has also done PR for the electrical and gas industries, said the authors of the report were not qualified to critique his course. He also said most of the material was provided by Patterson. “Ninety-five percent of my course material was his stuff,” Harris said.

However, he acknowledged that he did not accept that human activity was the main driver of climate change, as well as a connection to the Heartland Institute.

Harris would not comment in a telephone call and email exchanges on his renumeration from Heartland or the sources of funding of his own organization, the International Climate Science Coalition.

“The funding question is just a diversion,” he wrote in an email. But he acknowledged attending and delivering presentations at four Heartland conferences since 2008. “Whenever they will pay my expenses, I’ll go any time that I can,” he said.”

Some of the false or misleading material singled out by the Cass review are classic talking points among those who dismiss the existence of man-made climate change. They include lines like: “The only constant about climate is change” and “carbon dioxide is plant food”.

Other points are just plain wrong, like Harris’s assertion that there is only one weather station in the Canadian Arctic—when there are more than 40, that the Amazon jungle is a relatively new formation, in geological terms, or that urban weather stations do not show consistent warming.

Harris in his lectures also ventured into hyperbole, saying of the weather-caster and prominent climate doubter blogger Anthony Watts, that he “deserves a Nobel prize or a prize of some sort.”

“It was fairly shocking really,” said Chris Hassall, one of the team that wrote the report. “To look through some of the claims and to find that he was spinning those things as either a scientific debate, or muddying the waters on the extent of the consensus in scientific literature, or providing theories that really lacked empirical evidence—it happened time and time again and we document it extensively.”

The report, coming on the heels of the revelations about Heartland, offers further evidence that the misinformation campaign against climate change is becoming more entrenched in the academic arena.

“It’s clear from what I read that these people have an agenda. It’s not a disinterested lecturer teaching young and untutored students,” said John Stone, a former bureau member of the UN’s climate body, the IPCC, who reviewed the Cass report before it was published. “I think it’s really unfair on the students. They clearly have an agenda. They are not helping the students to develop a critical mindset which is absolutely essential if you are training to be a scientist.”

He rejected the argument criticism of Harris’s course represented an assault on academic freedom. “Does that mean that in biology you can teach biology that totally disregards Darwin’s theory of evolution? Does it mean in geography that you can continue to teach we live in an earth-centered solar system? I don’t think so. The science behind climate change is every bit as solid.” 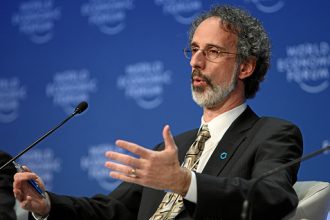 Peter Gleick in Fight to Save Job, Reputation