The founder of a new Conservative Climate Caucus is part of a Republican delegation headed to the international climate talks in Glasgow next week. Rep. John Curtis (R-Utah) said his party should have a seat at the table when climate change is being discussed at home and abroad.

Republicans, including those in the new caucus, get low marks for their environmental voting records as tracked by the League of Conservation Voters. And fossil fuel industry campaign contributions have long been lopsidedly skewed to the GOP.

Curtis said his party risks losing young voters who are concerned about the climate crisis, and maintains it’s time for the GOP to bring market-based solutions to the conversation. Curtis also said that conservatives are, in some areas, in harmony with President Joe Biden on climate goals, such as reducing the growing greenhouse gas emissions from Russia, China and India.

But Curtis and the rest of the GOP delegation to COP26, which will include Reps. Garret Graves of Louisiana, Dan Crenshaw of Texas and David McKinley of West Virginia, will have to show that they’re serious about advancing climate negotiations rather than trying to thwart them.

For instance, Republicans backed former President Donald Trump’s withdrawal of the United States from the Paris Agreement of 2015. In an interview with Inside Climate News, Curtis talked about his party’s reputation for blocking action on climate change, why he doesn’t expect any House Republicans (even his caucus members) to support the infrastructure bill that received bipartisan support in the Senate, and what he hopes to accomplish in Glasgow. The transcript has been edited for length and clarity.

What is the Conservative Climate Caucus and what are its goals at the upcoming climate talks?

Curtis: The Conservative Climate Caucus was formed because of a desire for Republicans to be more vocal on climate issues. Our first goal is to show the world that Republicans do care; that we’re there, that we’re engaged, that we want a seat at the table and we feel like we have good ideas as well. Number two is to share our message that the U.S. is taking a leadership position on this, that we have had some success—and no small success. And I would even say to join with President (Joe) Biden in areas that we do agree on. To give you one example of that would be the need to hold China and Russia accountable and to get them on board.

What are some things that you do feel that there can be bipartisan support on?

Curtis: It’s important that Republicans turn a page. We’ve done a fabulous job of telling people what we don’t like. It is important that we tell them what we like. One thing we would ask of [our Democratic colleagues] is a better articulation of the overall goal of reducing worldwide greenhouse gas emissions and what that looks like. We’d like to have some really thoughtful discussions with our Democratic colleagues about nuclear. And I think it’s fair to say that there are some concerns with nuclear—I share some of those concerns—but I’m going to bet we can innovate past those concerns, such as what to do with spent fuel rods and safety.

Another one where there’s broad bipartisan support is hydrogen, a potential game changer for a worldwide solution that could become a low-cost alternative to China and to Russia.

One where we probably have some disagreement—but it’s important to us—that’s the actual use of fossil fuels, particularly natural gas that has helped the U.S. reduce greenhouse gas emissions. In Russia, in India—natural gas could be the low-cost leader immediately and cause them to reduce their greenhouse gas emissions. I’m willing to join my Democratic colleagues in their calls for more control on methane. That’s one where we’d say, “Hey, work with us on natural gas, and we’ll work with you on methane.”

Are we talking about fees? Stricter regulations? Incentives?

Curtis: Well, I’ll tell you what I challenge my staff to do, and it’s a big challenge. I want to see a methane bill that deals with producers upstream. You have to bifurcate that into larger producers and smaller ones. We need to put some incentives in there to help smaller producers upgrade their equipment. The larger ones are ready for some more regulation. I’d also like my team to look at the methane coming out of cities. Cities need help with the infrastructure to capture methane and take it to market. And we’ve got some great ideas on our agriculture industry as well. If you’re going to deal with methane, I think you’ve got to deal with all three of those categories.

On your point about hydrogen and nuclear and carbon capture—they are all technologies that are on the horizon, not at a scale that can actually help cut emissions in half by 2030 and net zero by 2050. Yet, we hear scientists insist we need to reduce greenhouse gases now. What can be done immediately to reduce emissions on a large scale?

Curtis: There are vast gains to be made there, some low-hanging fruit. Most of the people that have made commitments, whether it’s a business or utility, to cut carbon emissions will put a little asterisk by that and say, “We don’t have the technology available to do that yet.” It’s urgent that we start a dual track, things that will hit immediately but also nuclear or hydrogen, with carbon capture and sequestration, because many people don’t see a path to cut it in half by 2035 without these technologies. We don’t have tons of time. If we’re going to get to half, and certainly if we’re going to get to 90 or 100 percent reductions by 2050, we’ve got to start right now. Also, we’ve got to confront what’s happening in countries like China and Russia. And the only way that I see a path to do that is to do one of two things. One is to develop a low-cost alternative to the coal that they’re burning. Natural gas could do that. Nuclear has the potential to do that. Hydrogen has the potential to do that. And we have to be able to pull carbon out of the air, whether that’s structures that capture their emissions or carbon sequestration.

On the infrastructure bill, are you a yes or no, at this point?

Curtis: This has been so frustrating for House Republicans–first, that we weren’t included in the discussions and then, second, that there’s been no vote. It’s been clearly tied by Speaker [Nancy] Pelosi and by the President to the larger spending bill, which makes it impossible for Republicans to support. It’s even been problematic for Democrats who really wanted to see this bipartisan infrastructure bill passed. If it had come straight over and not been made political, a large number of Republicans would have voted for it. Unless they decouple it, you’re not going to see any or almost no Republican support.

Are the divisions in the Democratic Party right now over these issues an opportunity for the caucus and Republicans?

Curtis: This is a window for us to step up into that void and say, “We’ve got some ideas; we think they’re very powerful ideas; we think they’re good ideas; and we’d really like a seat at the climate table.” We can only get so far with just one of the parties. You’ve seen the Democrats stall out trying to do it by themselves. We’ve got to step up as Republicans. We’ve got to be embraced by the Democrats in this pursuit, and we have to find answers together if we want to make the type of long-lasting change that I think everybody wants to make.

You’ve pointed out previously that Republicans in the bipartisan Climate Solutions Caucus fared poorly in their reelection bids. Do Republicans still face political risks—and being primaried—if they speak out on climate?

Curtis: The fact that 70 House members, including the ranking members of every committee of jurisdiction, have signed up for this caucus really should be a very loud signal that this is a new day for us in these conversations. [Republican House Minority Leader] Kevin McCarthy has put together a select climate task force that I’m on (the Energy, Climate, and Conservation Republican Task Force). That was a real clear signal from Kevin that we’re serious about this. It’s a new day in a different climate. Not that I don’t look over my shoulder for arrows. But, so far, it’s quite frankly been very well received.

Is there much concern among Republicans about what young people think about climate change?

Curtis: Absolutely. I have the youngest district in the country. That may be one reason that this has been a little easier for me to see than some of my colleagues, because I see it in their eyes. I see the disappointment that we haven’t been more aggressive on this. If we can’t capture them on this, I think we’re in trouble with this next generation.

Going back to COP26, are there any ideas or principles on which your group can make a little headway?

Curtis: You’ll be hearing us talk about U.S. innovation—nuclear, carbon sequestration, hydrogen, those types of things, and ways that we can support the president, such as holding China and Russia accountable. We’ll be looking for those opportunities to show that we are sincere about this and we really would like to work with our Democratic colleagues. 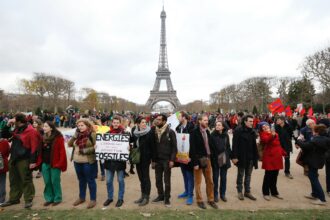 With Sen. Kyrsten Sinema’s Snubbing of the Democrats’ Reconciliation Plans, Environmental Advocates Ask, ‘Which Side Are You On?’