Countries must radically scale up their use of carbon capture and storage (CCS) technologies soon or risk missing the targets of the Paris climate agreement, new research suggests.

The authors of a study published on Monday in the peer-reviewed journal Nature Climate Change examined how big countries are approaching the daunting task of attaining the treaty’s central goal—keeping the world well below 2 degrees Celsius of warming since the industrial era.

They cited impressive progress in energy conservation and the use of renewables, but a lag in efforts to capture and store carbon dioxide from continued use of fossil fuels.

“We show that many key indicators are currently broadly consistent with emission scenarios that keep temperatures below 2˚C, but the continued lack of large-scale carbon capture and storage threatens 2030 targets and the longer-term Paris ambition of net-zero emissions,” the study authors wrote.

From the United Nation’s latest “emissions gap” assessment to the International Energy Agency’s emissions analysis, other reports have also warned that the world needs to do more to prevent catastrophic climate change—and they have similarly presented CCS as a key part of the solution.

Indeed, most climate models that give the world any hope of achieving the Paris ambitions of keeping warming not just well below 2 degrees, but even aiming for 1.5 degrees, include a significant role for CCS, sometimes in combination with burning biofuels.

This new study comes just a few months after the Paris treaty entered into force and Donald Trump was elected president on a platform that rejects the treaty and embraces increased production and use of fossil fuels.

The researchers estimated that fossil fuels and industrial processes released about 36.4 gigatons of carbon dioxide in 2016, the third year in a row it has remained at that level. To find out what’s behind this global plateau, researchers looked at the carbon intensity of energy use and found it varies by country.

China: The study found a decline in the share of fossil fuels in total energy use is driven by renewables growth, along with reductions in the carbon emitted per unit of fossil fuel.

United States: Declines in carbon per unit of fossil fuel consumed stem from a shift from coal to natural gas. Smaller reductions arose from gains in renewables.

Europe: The carbon intensity decline is dominated by the growing share of renewables in total energy use, with less progress in cutting emissions from fossil fuels.

“Our analysis helps us show how global emissions can be flat but countries and regions are heading in very different directions,” said study author Robert Jackson, a climate and environmental science professor at Stanford University.

Besides reviewing past energy trends, Jackson and others examined the countries’ climate pledges as well as more than 100 climate simulations. Those showed how changes in energy production and use through 2040 could keep warming to maximum 2 degrees Celsius.

They concluded that greater global increases in solar and wind power and further cuts in coal and other fossil fuels would help, as well as possible increases in nuclear energy and hydropower.

“The Paris Agreement was long on lofty goals but very short on how to make sure they are ever met,” said Timmons Roberts, an environmental professor at Brown University who was not involved in the study. “This piece is a huge contribution of just the kind of applied science needed to understand if we’re moving in the right direction and which parts of the economy are changing fast enough and which ones are not.” 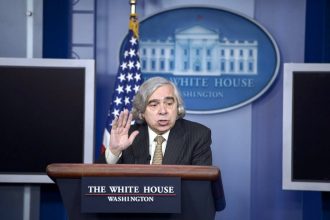