Amid the report’s grim projections for agriculture, the authors make an especially notable prediction: Advances in science and technology, like precision irrigation, drought-resistant crops and targeted fertilizer treatments, will only go so far toward helping farmers and ranchers cope with increasingly erratic weather.

The effects of climate change on American farms and ranches will likely outpace technological fixes within decades, even with the present pace of agricultural innovation, the report says.

“We’ve got tools. We can modify crops. There are options,” said Alyssa Charney, a senior policy specialist at the National Sustainable Agriculture Coalition. “But, at the end of the day, the pressures we’re expecting, and are already happening, are greater than the tools we have.”

The agriculture industry and agribusinesses have maintained that technological advances will help farmers survive extreme weather and shifting conditions driven by climate change. But the report, authored by hundreds of federal scientists, casts doubt on the industry’s refrain.

“They’re banking on new technology, new research,” said Tom Driscoll, who directs conservation policy for the National Farmers Union, the country’s second largest farm group. “But [the authors] say, within this document, that those advances will be overtaken.”

The report points out that agriculture is a major contributor of greenhouse gas emissions, but that it also holds enormous opportunities to control its emissions. Critics often say that efforts to capture and store carbon through certain farming techniques are under-utilized.

The authors of the climate assessment, a heavily peer-reviewed snapshot of scientific research, suggest that agriculture should play a central role in sequestering carbon—in mitigating climate change, not just adapting to it. But government regulators and Congress, pushed in large part by agribusiness and agricultural commodity lobbies, have so far exempted agriculture from comprehensive greenhouse gas measurements or controls.

The report recites a litany of gloomy predictions for agriculture: more heat and drought, pest problems and disease; extreme rainfall that will wash away soil; and overall declines in yield and productivity, especially in the Midwestern Corn Belt. While some regions might see a short-term boost in yields because of the “fertilization effect” of carbon dioxide, those benefits will fade by mid-century, it says. The picture is predominantly negative.

“Adaptive technology is not going to get you out of this,” said Laurie Ristino, a former attorney for the U.S. Department of Agriculture and now a visiting scholar at George Washington University.

The underlying causes of climate change also have to be addressed.

“Precision irrigation is great, but it’s not going to help you if you don’t have any water,” said Marcia DeLonge, a senior scientist with the Union of Concerned Scientists.

The report notes that recent advances in breeding techniques have brought about only “modest” gains in developing crops that can withstand weather extremes. Productivity gains from technological advances in recent decades could essentially be reversed to pre-1980s levels by 2050, even at the current rate of innovation, the authors say, citing a 2017 study.

Some Innovations Made Crops More Vulnerable

David Lobell, a professor at Stanford University in the Department of Earth System Science and director of the Center on Food Security and the Environment, pointed out that agricultural advances helped farmers thrive in the post-World War II era, but that was during a period when weather conditions were more stable. Some of these innovations make crops more vulnerable to climate-driven weather conditions. For example, corn cultivars that can be grown more densely make cropland more productive, but yield less in extreme heat.

“Many changes that have occurred in agriculture make us more, not less, impacted by climate change,” Lobell explained. “A lot of productivity-enhancing changes are more effective in good weather, and so the stakes for having good weather go up.”

And that good weather, the report makes clear, is not on the horizon.

The authors also lay out the case for more public research funding, which supported the boom in modern American agriculture over the last century but has declined in recent years.

“It seems pretty clear that this is going to happen and it’s happening now,” said Tom Grumbly president of Supporters of Agricultural Research, referring to climate change. “And we’ve wasted the last 15 years. … We’ve got maybe another 10 years to seriously develop the science to help us and our children and our grandchildren through the middle of this century.”

Grumbly noted that Congress created the Agriculture and Food Research Initiative more than a decade ago, but of the $700 million the program was supposed to get, only $400 million has been spent.

The report comes as Congress is getting close to finishing the Farm Bill, the five-year legislation that guides farming and food policy. The House version of the bill strips out a major conservation program that currently covers about 70 million acres, while the Senate version retains the program.

“You’re nominated to oversee one of the most preeminent scientific agencies in the federal government,” Brown asked. “Do you have any reason to doubt this report?”

Hutchins replied that he believed the “body of work” that supported the report was “genuine,” but did not specifically say he accepted human-caused climate change. He did, however, say he believed that American agriculture could play an important role in controlling greenhouse gas emissions.

Read more in our series Harvesting Peril about the potential of U.S. agriculture to sequester carbon and the industry and political forces that have left farmers ill-prepared to cope with the effects of climate change. 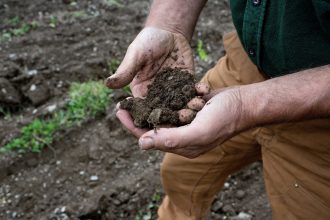