If there were any doubts that the climate is changing in the Colorado River Basin, 2020 went a long way toward dispelling them, thanks to yet another year of extreme weather.

Unprecedented wildfires, deadly heat waves, withering drought—the many indicators of the climate mayhem that scientists have been warning about for years—ravaged the landscape, claiming dozens of lives and causing billions of dollars in damage.

Colorado endured an unprecedented wildfire season. And so did California, in some cases burning where the wounds were still fresh from the epic fires of 2018. Utah experienced its driest year ever, and persistent high temperatures killed more people in Arizona than ever before. Monsoon rains that typically bring relief throughout the region were a no-show for the second summer in a row and now are being called the “non-soon.”

And, although the final climate data for 2020 just arrived and the new year is just weeks old, forecasters are already filled with apprehension about what lies ahead for the West this year.

“We’ve got a pretty deep hole that 2020 has dug for us,” said Jon Meyer, research climatologist for the Utah Climate Center who points to low soil moisture, high temperatures and other measures of  a hotter, drier climate. “Even a good year is not going to break us out of that.”

From the California coast to the eastern borders of Colorado and New Mexico, 2021 is beginning with virtually all of the Colorado River Basin in “extreme” or “exceptional” drought, conditions that haven’t been eased by this winter’s snowfall. Forecasters talk about a “snow drought” because the snowpack is so poor and snow cover across the West is lower than at any time over the past two decades. This year Lake Powell, the nation’s second largest reservoir, is expected to receive just half as much runoff as usual.

Little Rain, but a ‘Lot of Hot Air’ in Arizona

Arizona started drying out  rapidly last spring and, since October, the entire state has been in some form of drought. Now, all but 6 percent of the state is in dire “extreme” or “exceptional” drought that leaves wildlife and plants stressed.

She pointed out that instead of monsoon rains that raise humidity and lower temperatures through the summer, high-pressure and high temperatures were relentless for the second year in a row.

“We didn’t have storms—we just had a lot of hot air,” said Selover,  pointing to withering 110- and 115-degree days that led to a record number of 29 nights when the low never got below 90 degrees. “The previous record was 15 days.”

Those high temperatures posed a major heat risk, especially to people without air conditioning and those who work outdoors. She also pointed out that, not only is it tough to sleep when the temperature is 90 degrees or warmer” but also “the body doesn’t recover, and so we have a lot of heat deaths this year, more than we would normally have.”

When final data for last year rolled in, the National Oceanographic and Atmospheric Administration showed that Arizona had endured its second hottest year on record, with an average temperature of 62.6 degrees Fahrenheit. That’s a stunning 2.9 degrees higher than the average over more than a century and less than half a degree shy of the record annual average set in 2017.

Tucson, Arizona, had its hottest year, which was nearly 3 degrees Fahrenheit higher than the average since 1981, 72.7. And Phoenix had its second warmest year, 77.3 degrees, a surprising 2.2 degrees higher than the annual average over the past four decades.

Heat turned out to be the biggest factor in weather and climate related deaths in a dozen western and central states last year, according to the latest national billion-dollar disasters tally. The drought and heat wave caused 45 deaths—most of them heat-related—said Adam Smith, who collects the data for NOAA’s National Centers for Environmental Information.

Smith’s analysis is fast becoming a key metric in measuring the impacts of climate change. It compiles the costs in property damage and human lives associated with growing populations, more assets in harm’s way and the increased frequency of extreme weather, much of it driven by global warming. Last year the tally detailed $95 billion in costs tied to 22 events, the largest number of billion-dollar disasters recorded since NOAA began the list in 1980.

Smith said the estimate includes a broad range of quantifiable costs, such as damage to commercial and residential properties, crop losses, increased feeding costs for livestock and spending on fighting wildfires.

“It’s a conservative but solid estimate,” he said.

The firestorms in California, Oregon and Washington racked up an estimated $16.5 billion in costs and claimed 46 lives. Excessive heat across the West included a record temperature of 121 degrees in Los Angeles County and 130 degrees Fahrenheit in Death Valley (the highest recorded globally in decades). That heat, along with drought, came with a separate $4.5 billion price tag that included $1 billion to $2 billion associated with Colorado’s three largest blazes in state history.

And those numbers can’t account for the full range of costs, since some impacts won’t be clear for months or years.

“As striking as that $95 billion figure is, I think it’s really important that we remember that the human toll of climate and weather disasters is profound,” said Vijay Limaye, an epidemiologist who studies the health consequences of climate change for the Natural Resources Defense Council. “It’s staggering, and it’s widespread.”

He said extreme heat poses acute risks to human health not just through premature mortality from heatstroke, but also through a number of other health problems that aren’t fully measured by the billion-dollar disaster statistics. The health care-related costs of the wildfire smoke that shrouded skies across the West last summer and fall are not included, even though the smoke triggers heart and lung problems and is sometimes blamed for premature death. Nor are the little-understood mental health consequences of drought counted, he said.

A Thirstier Atmosphere Dries Out Farms and Drives Fires

Mistie Christiansen, who oversees USDA Farm Service Agency programs in central Utah’s Emery and Carbon counties, said the climate trends are disrupting life on the land and the people who depend on it.

“Ponds are dry; streams are dry; springs that would normally have supplied livestock and rangeland are dry; rivers are historically low,” she said. “It’s the compound factor of multiple years of this issue that’s really hard. People are really struggling.”

Area ranches and farms that depended on irrigation from Muddy Creek ran out of water by the end of last June. Her family cut just one crop of hay instead of the usual three and had to spend $45,000 to buy more to feed its livestock. This year, they’re expecting to spend at least $30,000 to make up for what the desiccated land cannot provide. Meanwhile, the cows are weaker and pregnancy rates are down, she said.

Based on the string of rough years and how things are looking now, Christiansen said she wouldn’t be surprised to see another bad year for livestock growers. “And if things don’t change, you’ll see a major sell off,” she said.

Despite the pain that global warming brings to rural communities like hers, Christiansen believes a higher power is changing the climate, not humans. Still, she shares one view with many climate scientists.

“There’s no longer normal,” Christiansen said. “I would love to see what is normal anymore, because we just swing from extremes.”

Jeff Lukas, an independent climate consultant in Colorado, said the world’s rapid warming is making the atmosphere thirstier “and that is so apparent in the second half of 2020.” Dry years can happen in the absence of climate change, he said. But the atmosphere’s capacity to hold more water, which leads it to suck moisture from the soil, trees and snowpack, has increased significantly in response to what might seem like an insignificant amount of warming—about 2 degrees Fahrenheit.

“What [last year] will be mostly remembered for, from a weather and climate perspective, is how things dried out so much in the summer and fall as a result of both low precipitation and very high temperatures,” said Lukas, who tracked climate and weather events at the Western Water Assessment for more than a decade. The dryness “led to the kind of fuel conditions and fire weather, that led to those incredible wildfires in August and September.”

For Lukas, one day-long period of extreme fire behavior last year stands out: when Colorado’s East Troublesome Fire ran 20 miles, expanding from 18,000 acres to 180,000 acres, eventually jumping over the Continental Divide in Rocky Mountain National Park last October. He noted that the heat, aridity and winds that set the stage for the blaze are not completely unheard of in autumn. But for such a fire to ignite and grow into the second largest blaze in state history in October, a month that is normally cool and moist, is unprecedented.

“To see it in real time, and to know that thousands of your fellow citizens are urgently trying to get themselves and their animals out of the path of this incredibly fast moving, incredibly dangerous fire, it is just stomach churning to watch it happen.”

2021 Set Up For More Heat and Drought

No one’s started using the word “scary” yet, but all reports seem to suggest 2021 could bring more of the same.

“There really isn’t any good news for water resources in the Colorado River Basin right now, which is raising a lot of red flags coming into the upcoming year,” said Jon Meyer of Utah’s Climate Center.

“We’re not totally sunk yet,” he said, noting that there are still a few months for snow to start falling and snowpack to build before warmer weather begins. But, if what we’ve seen play out over the last two to three months continues through the spring, he added, then the pain farmers and ranchers felt last year will expand across the region, and western cities will be suffering too. 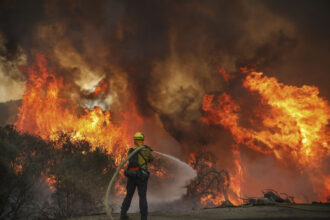 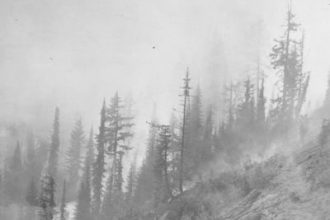 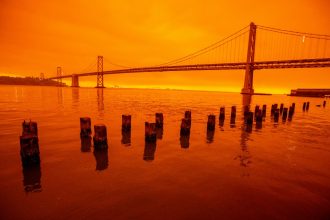 As groundwater supplies decline, Western water law lets those with the oldest rights use their entire allocations while junior users absorb all of the reductions. Diamond Valley is trying to divide the cuts more equitably. 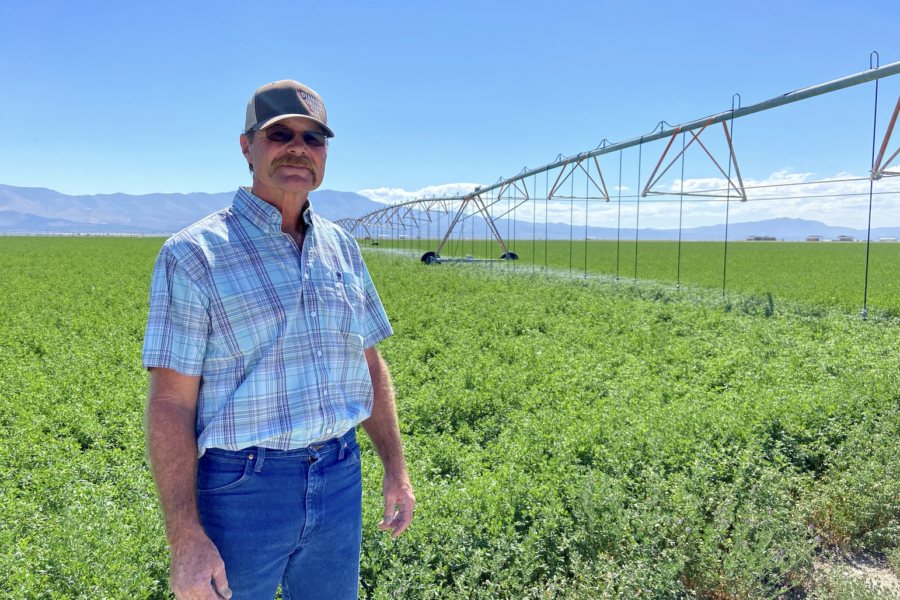