Some of the Obama Administration’s most outspoken advocates on climate change urged health experts to reach beyond the ivory tower as they reunited for the launch of a new center, focused on the health impacts of climate change, at Harvard University on Wednesday.

Gina McCarthy, the former head of the Environmental Protection Agency who will lead the Center for Climate, Health and the Global Environment (C-CHANGE), joined John Kerry, the former Secretary of State who negotiated the Paris Agreement in 2015, and John Holdren, Obama’s science advisor, to open its doors.

McCarthy, in an energetic speech that stood in sharp contrast to the gloom and doom that often accompanies talk of global warming, cast the threat of climate change as an opportunity to solve two problems at once.

“We can actually focus a lens on public health to improve people’s lives today, and that lens will steer us in exactly the direction that we need to go to address the challenge of climate change, she said.

Holdren noted with alarm that his old desk at the White House remains vacant, a symptom of the Trump administration’s disregard of science.

“This administration seems to believe it can do without inputs from science and technology. They can’t,” Holdren said. “We are already suffering from the lack of those inputs. We will suffer further.”

The Intersection of Health and Climate

McCarthy sought to reframe the discussion on climate change away from “polar bears in distant lands” to immediate impacts on human health and the prospective benefits of transitioning to renewable energy.

In India, an estimated 1.1 million premature deaths every year are caused primarily to coal-fired power plants and primitive cook stoves, McCarthy said. “Wouldn’t it be great to say let’s not talk about climate change and instead talk about raising people up by talking about healthy lives? That is what I want to do.”

McCarthy said similar benefits can be achieved closer to home by replacing diesel buses with zero-emission electric buses and by focusing on low income and minority communities most impacted by emissions. “Pollution keeps people down,” McCarthy said. “Clean healthy lives raises people up. It gives them a voice in their own future.”

As EPA administrator, McCarthy wrote the Clean Power Plan to reduce carbon dioxide emissions from power plants and regulations to increase fuel efficiency in cars—rules that her successor, Scott Pruitt, is now working to reverse.

Since leaving the EPA, McCarthy has been increasingly vocal in urging scientists, politicians and environmental advocates to fight efforts by the Trump administration to roll back key U.S. climate policies.

McCarthy cited a Harvard study published Tuesday showing that the death toll in Puerto Rico was much greater than the official count as an example of how science can play a role in shaping public policy related to climate change.

The study came out as Puerto Rico was planning for the start of a new hurricane season. The territory’s governor, Ricardo Rosselló, “absorbed it and said: you know, I can learn from this,” McCarthy said.

Kerry underscored the need to move quickly to mitigate the worst impacts of climate change. “Lives will be lost,” he said. “People will get sick and die, whole populations will be moved and have to move as a result of what is happening to their land, to their ability to produce food, to disease and other things because of decisions that have either been made or not made in Washington.”

Kerry urged the audience of scientists and other health experts in attendance to reach beyond their own echo chambers of peer reviewed journals and conferences. “We’ve got to make people feel this again,” he said. 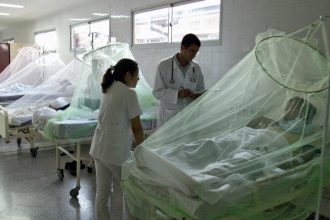