In the race to save at least some remnants of the world’s coral reefs, a new study shows only one thing really matters—capping global warming at 1.5 degrees Celsius.

Even at only that level of warming, more than 99 percent of areas previously seen as potentially safe havens for coral will disappear. Warming of 2 degrees C would wipe out all the “reef refugia” where corals might survive relentlessly warming oceans.

The grim projections are made in research published today in the journal PLOS One using new climate models that more accurately show how interactions between different parts of the climate system, like winds, ocean currents, clouds and multiyear ocean temperature changes like El Niño, affect reefs.

As recently as 10 years ago, models tended to show uniform ocean warming, without details critical to understanding coral reef survival, said co-author Piers Forster, director of the Priestley Centre at the University of Leeds.

“The latest generation are better able to capture marine heatwaves,” which cause coral-killing bleaching, he said. Bleaching occurs when ocean water temperatures become too warm and cause corals to expel the algae living in their tissues, turning their color white. Bleaching is the main cause of coral reef die-offs.

“We know that our baths do not warm uniformly when you turn the hot tap on,” he said, but can burn a bather’s toes while other parts of their body are comfortable.

“New models of the ocean can capture similar variations in warming,” he said.

Co-author Maria Beger, a marine ecologist at the University of Leeds, said the research team used the model to map the outlook for coral reefs at a scale four times more granular than previous studies, detailing areas as small as one kilometer.

Winking Out, One by One

Globally, reefs grow across 97,000 square miles—an area slightly bigger than the British Isles—but they are scattered in thousands of patches across nearly all the world’s oceans. Each reef is an iridescent galaxy of life with thousands of interdependent species, but they are winking out one by one, the research shows.

Previous large-scale coral reef mapping suggested that some protected areas might persist into the future, but the new detailed modeling shows “the small-scale features we hoped would exist” to preserve corals just won’t be there in the near future, Beger said. “The main message is stop pretending that something is going to save us.”

Currently, Earth’s average global temperature is about 1.1 degrees Celsius above the pre-industrial 1850-1900 reference period, and warming rapidly toward the tipping point for coral.

Governments have agreed in international pacts on conservation and biodiversity that the loss of coral reefs represents the unraveling of one of the major strands of the web of life.  Reefs will be one of the first major global ecosystems to be wiped out mainly by global warming, followed by glaciers and certain types of forests. As reefs and their fisheries dwindle, people are likely to go hungry without massive adaptation efforts in coastal areas of developing countries around the world.

But the consequences of reef die-offs are not limited to shorelines, said coral and climate researcher Mark Eakin, former director of the National Oceanic and Atmospheric Administration’s coral reef watch program.

“​​Coral reefs are critical systems, supporting life and livelihood for close to a billion people in the global tropics,” he said. “The loss of coral reefs due to the warming oceans is like wiping out entire states’ ability to grow grain. It’s like killing off much of the U.S.’s ability to grow beef. Losing coral reefs will result in widespread hunger and political destabilization. This is why military leaders have identified the climate crisis as a threat multiplier, increasing the risk of societal meltdown and radicalization in many of the poorer countries of the globe.”

“Fewer and fewer coral reefs will remain untouched by recurrent bleaching in the near future,” said Terry Hughes, former director of the ARC Centre of Excellence for Coral Reef Studies. “The future is here now. Instead of relying on a dwindling number of refuges, the world needs to urgently address the root cause of the problem. Pollution from greenhouse gasses.”

Hughes has chronicled the rapid collapse of the world’s biggest reef system, the Great Barrier Reef off Australia’s east coast, and said the impacts from five devastating ocean heat waves since 1998 mesh with the findings of the new modeling study.

“Places that we once thought might be enduring refuges from rising temperatures have rapidly dwindled in number and size,” he said. “For example, the northern region of the Great Barrier Reef escaped severe bleaching in 1998 and 2002, and we hoped then that it would remain a spatial refuge, protected by its remoteness.” But in 2016, it was the hardest-hit area, with half the corals there dying. A year later, the central reef took the biggest hit, and in 2020, it was the southern reefs, he said.

“After the three latest heatwaves in 2016, 2017 and 2020, only 1.7 percent of the individual reefs comprising the entire GBR remain unbleached today,” he said.

While governments express concern about impacts like reef die-offs, Eakin said, “most are too focused on next month’s economic forecasts rather than the next decade’s economic instability. There is far too much focus on short-term profit to understand the magnitude of shock the climate crisis will bring.”

“Large investments in areas that might not experience as much thermal stress might not be the best approach. Those areas are going to rapidly disappear within the next few decades,” she said. “There was some idea that there are some reefs where thermal conditions will be maintained and corals will be able to survive there, that’s not what we find at the resolution our study is at.”

The study shows, for example, that the thermal buffer zones at higher latitudes will disappear first, including in the Caribbean, where there are major coral conservation efforts under way.

Most existing reefs will disappear or be degraded within decades, so “we need to reimagine what coral reef ecosystems look like, realizing that they will be less diverse, less colorful, and support fewer species,” Beger said. But that’s no reason to stop doing reef conservation, she added.

Protecting corals from other impacts, mainly pollution, could help at least delay the “complete degradation” of reef systems, buying some precious time in the climate crisis, she said. That would also give reef-dependent communities more time to adapt, she added.

And there are reefs in areas not mapped as protected zones that are still less exposed to heat than the most severely impacted.

“It would be good to work on local conservation schemes that remove other stressors there,” she said.

Dixon said there is evidence that corals are on the move, with research in Australia and Japan showing how currents flowing parallel to the shore seem to have enabled some corals to move to new areas faster than expected.

In a world with a stabilized climate, new coral formations may develop with different communities of species, a bit like stardust organizing into new galaxies. But that’s not a sure thing and won’t happen for decades. Big, old corals that anchor thriving reef ecosystems take a century to mature, Beger said.

“The idea is to restore reefs with such corals—and our study could help identify places where to do such restoration work and where not,” she said.

But she said the new study, and its findings that heat stress is a global and increasing phenomenon that will likely affect almost every reef, makes her even more skeptical that those approaches will save them.

“Imagine how many individual corals this heat stress will be killing—I simply can’t see how we might possibly restore them all,” she said. “A much simpler, cheaper, and more obvious solution will be emission reductions, though whether even our biggest efforts there can save coral reefs is unclear.” 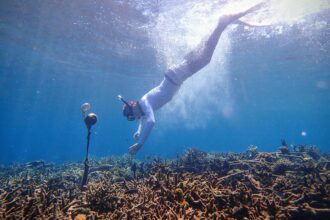