So far, the investigation of flood-related damages has lagged behind studies on sea level rise, said Jürgen Kropp, one of the study authors and a climate scientist at the Potsdam Institute for Climate Impact Research in Potsdam, Germany.

This new study, published Monday in the journal Natural Hazards and Earth System Sciences, comes on the heels of two related climate papers. One found that the current rate of sea level rise is the fastest on record for at least the last 28 centuries. That study, by researchers from seven institutions including Potsdam, was published last week in the journal Proceedings of the National Academy of Sciences. The other, by scientists at Climate Central, concluded that the coastal flooding of American towns and cities will continue to intensify in the future due to manmade global warming.

“For decision makers, it’s important to know what the expected costs [of coastal flooding] will be for the future”—not just how much sea levels will increase, said Kropp. This new analysis underscores that urgency, showing “damages rise much faster than sea levels,” he said.

U.S. communities already feeling the impact of, and responding to, sea level rise have probably already figured this out or wouldn’t find the results surprising, flood expert Chad Berginnis told InsideClimate News. But for rest of the country, “it could be a very surprising conclusion,” said Berginnis, executive director of the Association of State Floodplain Managers who did not participate in the study.

According to Kropp, the new study analyzes how to estimate the economic costs for a certain level of flooding from sea level rise in a particular year. While such analyses have already been developed for specific cities, such as New York, they aren’t easily replicable, explained Kropp, which is where this study comes in.

In the paper, researchers analyzed Copenhagen (estimated pop. 560,000). They used an estimate of flooding-related damages in the city of $1.2 billion a year in 2010. If the flood level rose about 11 centimeters (or less than 5 inches) by 2050, and no protective measures were put in place, the associated flooding damages would nearly double, reaching an estimated $2.6 billion a year.

If flood levels rose more dramatically, 25 centimeters (or nearly 10 inches) over that span, and no protection measures were established, the associated costs would increase by about 4.5 times to about $6 billion by 2050.

The analysis is flexible and can take the impact of flood protections, such as seawalls, into account.

“We need scientific approaches to help us calculate damage costs and adaptation costs in a comparative manner,” said Kropp. These tools ultimately help city managers and flood planners “compare where to invest and where not to invest” in response to rising seas, he said.

Cost increase rates will vary by city, and while researchers only analyzed two Danish cities—Copenhagen and Kalundborg—in this paper, they’ve tested it on more than 100 European cities. Those results will be the subject of a future paper. 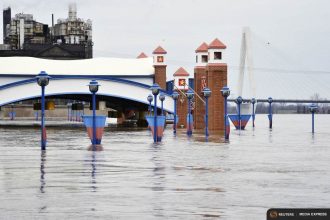 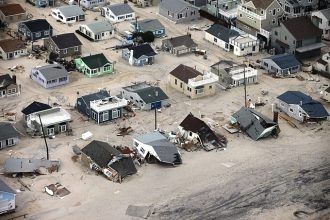