A newly released internal e-mail from TransCanada Corp. is raising fresh questions about whether its managers attempted to undermine the credibility of a former employee who questioned the company’s commitment to safety, describing him as “disgruntled.”

The email is the latest in a collection of thousands of pages of records released by the former employee, engineer Evan Vokes, who has been at the center of a dispute over the safety of TransCanada’s operations in Canada. The emails also touch on TransCanada’s record in the United States, where it hopes to build the multibillion-dollar Keystone XL pipeline project. Another TransCanada pipeline, which runs from Alberta, Canada to Cushing, Okla. and is known simply as the Keystone, has been plagued by at least 35 leaks or other incidents in the U.S. and Canada since it opened in June 2010.

The records Vokes released document internal safety concerns raised within the Alberta-based energy company, along with the responses from management. Vokes worked at TransCanada for five years, specializing in “non-destructive” examination, which uses tools or visual inspections of the infrastructure without damaging the pipeline.

Vokes, 48, collected most of the records before TransCanada dismissed him in May 2012. They were later submitted as evidence when he appeared at a Canadian Senate committee hearing studying energy policies in 2013.

Vokes obtained the latest email in February 2014 following a request he made through Canadian legislation that protects personal information. TransCanada censored large portions of the message before releasing it, but one section of the email mentions what was described as “managing the EV [Evan Vokes] credibility issue.”

“My understanding is that we have been reasonably successful at influencing authorities [portion censored] and pointing out EV is disgruntled, and actually had the responsibility to correct these same matters and did not,” said the email, dated July 26, 2013.

TransCanada declined to identify the employee who wrote the comments about Vokes, or to say which authorities were referred to in the email.

“We are not going to debate interpretations of the wording used by TransCanada staff members in old emails or private records,” said spokesman Davis Sheremata in a written response to questions.

The U.S. State Department, the lead agency reviewing the Keystone XL project, declined to say whether it had discussed Vokes with TransCanada.

The Pipeline and Hazardous Materials Safety Administration also declined to comment on the email, but spokesman Damon Hill said the agency acts to protect the environment whenever it finds evidence of non-compliance by a company.

Canada’s National Energy Board announced in October 2012 that it would audit TransCanada’s operations in response to Vokes’ complaints. It released the audit in February 2014 and found no immediate safety concerns. However, the audit also concluded that TransCanada was breaking Canadian onshore pipeline regulations in areas such as hazard identification, risk assessment, monitoring and management review. A separate audit of the company’s management, released on April 24, found that TransCanada wasn’t meeting requirements to protect whistleblowers who report concerns, incidents and near-misses.

When asked about the July 2013 email last week, the Canadian regulator told InsideClimate News that the company didn’t interfere with the audit process.

“At no time during numerous interactions between board staff and TransCanada staff did the company attempt to influence the board on the character of Mr. Vokes,” board spokeswoman Erin Dottor said in an email. “The source of any complaint or issue identification in no way impacts the NEB’s commitment to take action to mitigate or prevent potential hazards to public safety or environmental protection.”

Other internal records that Vokes obtained from TransCanada include an email from February 2012, when he was still working for the company. Someone wrote that the engineer had complained to authorities and was planning to go to the media. In another message, someone wrote to a colleague about being approached by Vokes for a meeting and asking the colleague for instructions on how to proceed. The names of employees who sent and received the emails were withheld by TransCanada.

TransCanada’s safety record and corporate culture are under scrutiny as the company seeks approval from the U.S. government to build the controversial Keystone XL project. The pipeline would cross the Ogallala aquifer and other sensitive U.S. water sources as it carries diluted bitumen, or dilbit, from Alberta to refineries in Texas. The development of Alberta’s bitumen reserves is considered the fastest-growing source of greenhouse gas emissions in Canada.

David Domina, a lawyer representing Nebraska landowners who are challenging the pipeline’s route, said he doubts the e-mails Vokes obtained could be used for the ongoing court case, but suggested they might be discussed if the state is forced to restart the approval process.

Domina, who is running this fall for a Senate seat as a Democrat, said the e-mails reminded him of some of the company’s tactics in dealing with landowners affected by the route.

“It seems clear to me that TransCanada has a tug-of-war going on between environmental safety and profit,” he said in an interview.

“The company ought to slow down, get its act together, tell the truth and it would have a much better chance of getting what it wants.”

The stakes for TransCanada in the United States are high. If approved, the Keystone XL would send up to 830,000 barrels of crude oil from Canada’s oil sands coursing through the 36-inch-wide pipeline every day. (On average, refineries can produce about 19 gallons of gasoline from a barrel of crude oil, according to the U.S. Energy Information Administration.)

But the project has been caught up in delays since it was first proposed in 2008. Last month the State Department announced a new delay related to an ongoing court case regarding the pipeline’s route through Nebraska. Because of the delay, the Obama administration’s decision on the project isn’t expected until after the U.S. mid-term elections in November.

TransCanada has described the Keystone XL as the “safest and most advanced oil pipeline operation in North America.” It has also touted economic benefits the U.S. will enjoy during the construction phase, including more than seven million hours of labor and more than 13,000 jobs.

But President Barack Obama has downplayed the economic benefits, telling The New York Times last year that the project may create only 50 to 100 permanent jobs, without necessarily lowering gasoline prices.

Some of the records Vokes collected prior to his dismissal reveal internal TransCanada discussions about welding procedures and other concerns that management dismissed. In a Jan. 18, 2011 email, an employee advised managers to deny a contract to Houston-based WeldSonix, a pipeline inspection company for the original Keystone pipeline. The engineering technologist, Russell Wong, said WeldSonix posed a “high risk to the project from a supplier performance and pipeline integrity perspective” based on its history with TransCanada.

About 10 minutes after Wong sent the message, the top project engineer for Keystone, Meera Kothari, rejected the recommendation: “Please stop these e-mails,” Kothari wrote. “This is a project engineering decision.”

WeldSonix didn’t return phone and e-mail messages asking for comment, but TransCanada said it secured independent third-party reviews for all of the projects raised as a concern by the Canadian regulator.

The company wasn’t immediately able to answer whether this would include work done in the United States, and the spokesman, Sheremata, said he didn’t know whether WeldSonix has any active contracts with TransCanada.

Vokes was also told in a June 2011 email from David Taylor, a manager of materials and engineering, to stop investigating on his own and “accept where we are and become aligned with where we are going as a company.”

Another manager, Tom Hamilton, in charge of quality and compliance for Keystone, wrote “Ha ha ha” in an Oct. 21, 2011 email to an engineering technologist who asked whether the company would supply inspectors to conduct non-destructive examinations of the new pipeline.

In a separate case, another TransCanada engineer, Ron Wong, wrote in internal emails in June 2011 that employees couldn’t locate key records about the company’s welding procedures after a search that lasted for months. The records were sought by a provincial pressure safety authority, the Alberta Boilers Safety Association, to confirm that TransCanada was “in strict compliance” with the rules.

None of the TransCanada employees mentioned in the emails have responded to requests for comment.

TransCanada declined to say whether any managers were disciplined due to privacy and confidentiality responsibilities. It said it couldn’t comment on Vokes’ dismissal for the same reason.

Najmedin Meshkati, a professor of civil and environmental engineering from the University of Southern California, said the internal emails suggest that TransCanada’s safety culture prevents concerns raised by employees from being resolved.

“We need to destroy that vicious cycle of secrecy and not doing too much about safety, because again, this issue will come back and haunt us,” said Meshkati, who has done research, consulting and teaching about corporate safety culture for more than two decades, in an interview.

“It’s better to proactively address that rather than to shove it under the carpet and just work around and get the job now in order to be on time and under budget.”

TransCanada’s Sheremata said the company’s processes encourage “people to err on the side of caution—and makes sure these people are supported and rewarded for doing so.”

He added that TransCanada took the issues seriously when they were brought forward.

“Our reviews concluded that most of the items raised had been identified through normal review processes and steps were taken to address them,” Sheremata told InsideClimate News. “Consistent with our management system processes, items of immediate concern were resolved at the time they occurred and and action plans were put in place to improve processes on future projects where applicable.”

Vokes told InsideClimate News that he believes management lashed out at him because it was “fed up” with allegations that the company was trying to avoid costly repairs and inspections.

“There are literally thousands of cracks in the system but they sit there until somebody disturbs them,” Vokes said in an interview. “Whether it’s the ground or frost, construction in the area, or a farmer doing work, suddenly all these substandard construction techniques can become a major problem because they were never dealt with during construction.”

In March, the federal privacy commissioner’s office in Canada notified Vokes that it is reviewing the censored portions of the documents TransCanada released to him.

“I have requested the withheld materials for audit and am pleased to inform you that TCPL [TransCanada] has accepted,” the privacy commissioner’s investigator, Todd Lyons, said in a March 11 email to Vokes. “Once I have an opportunity to review, they would like to meet face to face to discuss the matter further.”

Vokes wrote back asking if he could attend the meeting. But Lyons replied that TransCanada had asked to meet alone with the watchdog’s office. 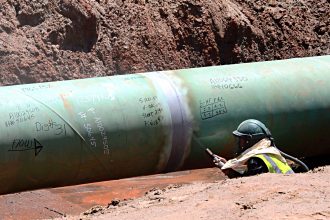