Story updated on Nov. 13 at 2:30 a.m. EDT to include content of warning letters obtained by CBS from federal regulators to TransCanada.

Story updated on Nov. 12 at 3:20 p.m. EDT to include comments from TransCanada.

A group of environmental advocates and Texas landowners is urging federal regulators to block TransCanada from starting the southern leg of its Keystone XL pipeline, while new inspections are conducted and the company’s construction and safety practices are investigated. The Oklahoma-to-Texas oil pipeline is nearly completed.

The activists, led by the consumer advocacy group Public Citizen, allege in a report released Tuesday that shoddy construction on the new line has caused more than a hundred defects that TransCanada has had to fix. They believe the “anomalies,” even after repairs, could leave the pipeline vulnerable to breaks and spills.

They called on the federal Pipeline and Hazardous Materials Safety Administration, or PHMSA, to require comprehensive retesting and reinspection of the line before its scheduled startup around the end of this year.

The critics also want regulators to investigate TransCanada’s construction and quality assurance records to see why so many repairs were needed and whether the company’s practices, which have been criticized by Canadian regulators in the past, met safety standards. They are urging Congressional committees to hold oversight hearings into the matter.

“What appears to be problematic construction and corner-cutting raise questions not only about the chances of a spill, but also about the quality of TransCanada’s in-house inspection system, as well as the ability of the federal government to oversee the process,” according to the report.

The report said the pipeline should not be allowed to carry fuel until it has been retested with high water pressure, as well as reinspected using robotic devices known as “smart pigs” that can spot flaws and weaknesses.

“There is no such thing as an anomaly-free pipeline,” he said after reviewing the report. “These are valid issues. But what I see does not rise to the level that in my opinion and experience would require a full hydrotest and another series of smart pig runs.”

TransCanada said the repairs show that the company is being diligent in meeting and exceeding safety standards.

“If you use more stringent measures to find anomalies as we are doing, you going to find more anomalies,” wrote spokesman Davis Sheremata in an email.

“Making sure that each weld, each section of pipeline and all of the facilities are built to the higher standards we have agreed to is what the public would expect of a responsible company,” he wrote. “The public expects us to build this pipeline safely and to get this done right. We agree, and that’s what we are doing.”

The $2.3 billion, 485-mile pipeline would carry Canadian oil from Cushing, Okla. to the Texas Gulf Coast—primarily diluted bitumen (dilbit) from the tar sands, which is unusually hard to clean up when it spills into water.

The pipeline would cross more than 630 streams and rivers in Texas, where Public Citizen concentrated its attention. People who live along the route, the report said, “face a big risk to their land and livelihoods should this pipeline leak or rupture.”

David Whitley, a Texas landowner cited in the report, said TransCanada returned to his 88-acre cattle ranch in May to dig up a stretch of the pipeline. He let TransCanada cross his land willingly, he said in an interview, but is now concerned that “this thing might not be as safe as they are telling me.”

“I was one of those go-along guys,” he said. “The pipeline is here, and I know darn well there is nothing I can do about it as an individual. I’m just kind of going to hope for the best.” Whitley believes the original pipe was dented because it was put down on a large rock in the original trench, and that an inspection detected the flaw.

Whitley said he has not yet read the Public Citizen report, but said the group’s demands reflect his wishes. “I would like to see the pipeline tested again, and see some real oversight.”

The southern segment does not need approval from the Obama administration because it doesn’t cross an international border.

Public Citizen urged the administration to consider the alleged problems on the southern portion as it decides whether to approve the Keystone XL’s northern section. If built, that pipeline would carry dilbit through Nebraska and cross one of the nation’s largest and most important water sources, the Ogallala aquifer.

Treat It as a New Pipeline

Public Citizen said there were at least 125 sections on the Keystone XL that had to be excavated and repaired during the past six months, and possibly many more.

Kuprewicz said although he would “rather not have that number,” not every anomaly poses a serious risk. “I understand the emotions involved,” he said. “But these appear to be attempts to delay the startup.”

Public Citizen conducted its investigation by interviewing landowners such as Whitley, visiting repair sites and flying over sections of the pipeline. The group saw signs of several construction problems, including dents and welds needing repair, coating problems, improper backfilling, unintentional sags, insufficient pipe support and erosion. It said it did not have access to TransCanada records or those of PHMSA, the federal pipeline safety agency.

In documents obtained by CBS, PHMSA told TransCanada over the past two months that it was “not following their Construction Specifications.” Regulators found a “high weld rejection rate” on a section in which 205 welds needed repairs. TransCanada “failed to use properly qualified welders,” according to one document.

Public Citizen worked with Evan Vokes, a whistleblower and former TransCanada employee who has long criticized the company for what he calls a “culture of noncompliance” with pipeline safety codes. His disagreements with the management led to his dismissal from the company in 2012.

Vokes said that because there are so many new welds and new sections of pipe on the Keystone XL, it shouldn’t be allowed to carry oil until TransCanada carries out thorough inspections.

“They have taken what could have been a very strong chain and weakened many links on the chain,” Vokes said in an interview.

The Public Citizen report said PHMSA should require advanced tests such as a hydrostatic analysis, which simulates the pressure that will be generated later when the pipe is filled with oil.

In an interview, Tom Smith, director of Public Citizen in Texas, said that new pipelines have to be carefully inspected and tested using such methods. So it only makes sense to do the same thing again for a line that has been patched at various points, he said.

Vokes, the former TransCanada engineer, said the sheer number of repairs on the southern leg could be a red flag about the company’s initial work and how it was overseen. Pipeline companies must be sure their employees and contractors are formally “operationally qualified,” he said.

“Why are you building pipelines that have all these problems?” he asked. 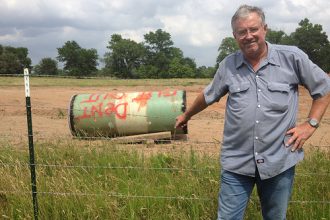 TransCanada: Dents and Disruptions in Texas