My last full day of ICESCAPE dawns, if you can call it that (is there dawn where there is no night?) and, although I’m sad to be leaving, I’m excited about something else: today I’m going onto the ice! From the windows of the bridge there’s a thin gray smear on the horizon. It’s the open sea, just two miles away.

Our ice scientists have staked out another interesting floe of ice — with a curving frozen stream they’re nicknaming the Mississippi River — and are preparing for the last ice station for a few days, since we’re going back out of the ice. And I’ve been invited to go along. Later in the day, we’ll be joined by the whole ship and science crew for an ice liberty party! But before I can go on the ice, I have one last blog post to write from ICESCAPE. So I’ve asked Chief Scientist Kevin Arrigo for some final thoughts.

“Although we are currently surrounded by this beautiful and vast expanse of ice, it’s easy to forget that, in fact, 2010 set a new record for the lowest ice extent ever recorded for this time of year,” Arrigo said. “Climate change is real and it is threatening to irrevocably alter the very nature of this unique environment. Something dramatic needs to be done — I just hope it’s not already too late.”


In the face of this spring’s low ice coverage, sea ice experts were quick to point out that statistically the spring ice has not necessarily been a harbinger of conditions at the end of the melt season in September. But the fact that the ice cap is in decline is indisputable. The other night, Co-Chief Scientist Don Perovich of the US Army’s Cold Regions Research and Engineering Laboratory (CRREL) gave a short talk about Arctic ice for the other scientists and Coast Guard personnel aboard the vessel.

The first slide shows the Arctic ice cap in 1980, when it measured 7.8 million square kilometers. When Perovich searched for a comparable land mass, he didn’t have to look far: the continental United States. In 2007, which set the record for the lowest sea ice extent recorded since reliable satellite measurements began in 1979, the ice cap had shrunk to 4.2 million square kilometers — as though everything east of the Mississippi, plus quite a bit of territory to the west of it — had melted into the sea.

Increasing atmospheric concentrations of greenhouse gases has made the earth warmer, with the Arctic warming at about twice the rate of the rest of the globe.

Yesterday I was talking to a Coast Guard cadet on his first cruise to the Arctic who recalled a conversation at the beginning of the trip.

He was pressing his colleagues to tell him what the ice was going to look like, and someone pulled out a sheet of blank printer paper. “Like this! It’s as white as this.” It’s true; it’s just that white. You need to put your sunglasses on in order to look at it. According to ICESCAPE’s ice scientists, one of the most important things the ice is doing out there is reflecting light back into space.

Melt away that ice, and the darker ocean waters are left exposed to incoming solar radiation. Perovich says that ice is an excellent reflector of sunlight, while the ocean absorbs more than it reflects.

In technical terms, sea ice has a high “albedo,” or reflectivity, whereas open ocean waters have a low albedo. So losing the immense territory of sea ice means that the Arctic will absorb more incoming solar radiation during the melt season, setting off a feedback loop known as the “ice-albedo feedback,” in which melted sea ice is replaced by open ocean, which warms up quickly, in turn melting more sea ice and exposing more open water, which then further speeds up ice melt, and so on…

During this trip, ICESCAPE scientists are gathering more data that will detail the ramifications of this feedback loop and other changes in the Arctic environment. ICESCAPE will be back in 2011 for another cruise, this time in the autumn. With such swift changes taking place, I wonder what will be different by then? 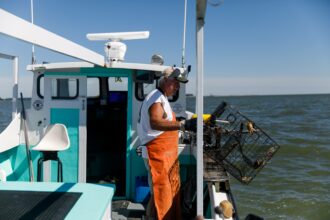 Lake Xochimilco’s canals and island farms, on the southern tip of Mexico City, are on UNESCO’s World Heritage List. They are also imperiled by overdevelopment, pollution and climate.