Nearly 200 countries have signed off on an agreement that embeds the promotion of human rights and the “rights of nature” into a plan to protect and restore biodiversity through 2030.

The 14-page document, while nonbinding, was adopted on Dec. 19, 2022 at COP15, a 12-day conference convened in Montreal under the auspices of the U.N. Convention of Biological Diversity. It is the first international agreement to give credence to a growing movement that recognizes that nature and everything it encompasses—from animal and plant species to rivers, mountains and the soil—possess inherent rights similar to those of human beings.

The accord Is therefore being hailed by some environmentalists as a watershed moment. Mentions of human rights, Indigenous peoples’ rights, local communities’ rights and gender equality are also threaded throughout the document, marking a shift from past biodiversity agreements that skirted the human rights issue.

Because the agreement is not binding, it will ultimately be up to governments to ensure that those rights are protected as conservation projects are carried out to further the plan’s goals. Some may find the accord quixotic: Countries failed to reach a single target laid out in the last 10-year biodiversity plan, which set goals to be reached by 2020.

The COP15 conference was originally scheduled to take place in Kunming, China, in 2020 but was delayed and relocated because of the Covid-19 pandemic.

The accord, approved on the meeting’s final day and known as the Kunming-Montreal global biodiversity framework, comes as plant and animal species are going extinct at roughly 1,000 times the rate they would be in the absence of harmful human activity. Stakes for the meeting were high, with the die-offs already threatening humanity’s food and water supplies, according to the Intergovernmental Science-Policy Platform on Biodiversity and Ecosystem Services, or IPBES, an independent body that provides scientific assessments of Earth’s biodiversity.

Aside from the moral issues posed by the human role in causing other species to go extinct, the destruction of ecosystems has grave implications for the global economy and for local livelihoods. In the agreement, 196 governments laid out 23 biodiversity targets to be met by 2030, including a top-line goal to protect 30 percent of the world’s land and oceans. Governments also promised to mobilize at least $200 billion in public and private funding for biodiversity protection by 2030, including $30 billion paid from developed countries to developing countries.

Other targets focus on reducing pollution from all sources, requiring businesses to disclose their environmental impacts and dependence on biodiversity, managing agriculture and fisheries sustainably and implementing legal, policy and educational measures to encourage people to make “sustainable consumption choices.”

The United States, where the U.N. Convention on Biological Diversity was never ratified, participated in the proceedings as an observer state.

While it is up to individual governments to enact laws and policies aligned with the plan’s targets, the signatories agreed that each country’s actions should comply with a list of 18  “considerations,” including respect for human rights and for the rights of nature and of Mother Earth, in countries that recognize such rights in their own legal systems.

Like many parties in recent climate change negotiations, those groups have also underlined the disproportionate responsibility of wealthy countries for ecosystem destruction. Others have questioned why people in developing countries with little responsibility for the resource extraction and industrial activity that are driving species die-offs should sacrifice their rights to land and to potential economic development for the sake of establishing conservation parks.

The deal reached in Montreal will not, on its own, resolve those issues. But language in the agreement is aimed at pushing governments toward an approach to conservation that harnesses the knowledge and participation of Indigenous and local communities while respecting their rights. A growing body of research has emphasized the important role those groups have traditionally played in protecting biodiversity.

Fiore Longo, the head of the “Decolonize Conservation” campaign for Survival International, a movement that champions Indigenous rights, said that the rights-based language in the accord was a “major step forward.” But she said the agreement lacked clarity on what redress could be sought if governments violated tribal rights when carrying out conservation projects.

Longo said that governments had disproportionately focused on efforts to create conservation areas without taking adequate measures to rein in activities like industrial farming and deforestation that are contributing to ecosystem destruction.

One of the targets in the framework calls for reducing government subsidies to harmful industries by $500 billion by 2030. Such subsidies are currently estimated at about $1.8 trillion annually.

The agreement marks progress from where governments were just over a decade ago, when no mention of human rights was made in the 2010 global biodiversity agreement. Unlike past accords, the 2030 plan refers to the human right to a healthy environment, recognized in July by the United Nations General Assembly after more than 150 nations had done so.

Laws governing human rights, which began taking shape in the wake of World War II, developed separately from environmental protection laws, which generally originated in the 1970s and were largely relegated to the policy and regulatory arenas. Over time, however, the two areas have merged somewhat amid the increasing awareness that humans are interconnected with nature.

The Kunming-Montreal agreement’s embrace of human rights springs not just from the growing recognition that healthy ecosystems are a foundation for human well-being but also from concerns generated by the advocacy efforts of Indigenous peoples around the world.

“Indigenous Peoples and local communities are happy that finally we are here,” said Lucy Mulenkei, co-chair of the International Indigenous Forum on Biodiversity, which was organized at a COP conference on biological diversity in 1996. Now, she said, she and her colleagues are “ready for the implementation journey.”

The Rights of Nature and Mother Earth

The rights of nature movement, meanwhile, has been pushing for recognition since around 2006. Advocates have steadily pressed governments to recognize that nature and all of its component parts possess certain inalienable rights, like the rights to exist and regenerate.

More than 30 countries and tribal nations already recognize the rights of nature in some form, whether through constitutional provisions, laws or judicial decisions. While a U.N. Harmony with Nature program has promoted the movement, until now language invoking the rights of nature had not been included in an international accord.

The new agreement acknowledges this alternative approach to mainstream views:  “Nature embodies different concepts for different people, including biodiversity, ecosystems, Mother Earth and systems of life.” it says. “The framework recognizes and considers these diverse value systems and concepts, including, for those countries that recognize them, rights of nature and rights of Mother Earth, as being an integral part of its successful implementation.”

Rights of nature advocates hailed the language as a watershed moment for the recognition of “diverse value systems.”

“Having the rights of nature in this agreement resembles a shift from seeing nature as a resource for profit to seeing it as the source of life,” said Rachel Bustamante, a conservation science and policy analyst with the nonprofit Earth Law Center. “Government leaders can now shift laws and policies to honor that.”

Bolivia, which is among the countries that have recognized the rights of nature, led the push for affirming that philosophy in the final biodiversity plan.

Diego Pacheco Balanza, the lead Bolivian negotiator at the conference, said the language underscores the growing opposition to viewing nature as a resource to fuel economic growth.

“Bolivia considers that it is urgent to change the anthropocentric paradigm of capitalism in order to halt the environmental crisis and multiple crises in the world,” he said.

Along with Bolivia, the governments of Ecuador and New Zealand championed the inclusion of the rights of nature in the biodiversity plan. Ecuador enshrined those rights in its 2008 constitution, and New Zealand has entered into agreements sought by indigenous Maori peoples that recognize the rights of the Whanganui River, a national park and a mountain.

Opposition to that language came from the European Union, Japan, Argentina and Australia, although all 196 countries at the conference endorsed the agreement.  Bustamante said that Australia was the only country that gave a reason for its opposition, with the Canberra government pointing out that the country did not recognize the rights of nature in its own legal system. A deal was reached that couched the final language as an acknowledgment of the value systems of countries that do recognize such rights.

The final biodiversity agreement also recommends an emphasis on “Mother Earth-centric actions” and “nonmarket-based approaches” in spending the hoped-for $200 billion for biodiversity protection.

Pacheco said that such actions would include promoting sustainable patterns of consumption and production, promoting the participation of Indigenous peoples and local communities in the management of ecosystems, and developing policies that address economic inequality. 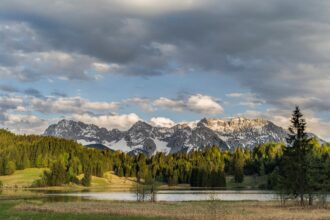